Fine Gael have hit a new low in a Red C poll published in today’s Business Post.  The last tim...

The last time Red C polled the electorate, Tánaiste’s Leo Varadkar’s party received the support of 20% of voters - their worst score in a Red C poll since 2005.

However, the party has since dropped a further percentage point and, if an election was held tomorrow, only 19% of voters would give their first preference to Fine Gael.

Taoiseach Micheál Martin’s Fianna Fáil party fared even worse - with only 16% of people intending to vote for them.

While Sinn Féin President Mary Lou McDonald will be happy that her party has retained its commanding lead over the government parties; 33% of people plan on voting Sinn Féin - a figure unchanged since the last poll.

The Greens, Social Democrats and the Labour party are all on 5% each, while independents and other smaller parties are supported by 16% of the electorate. 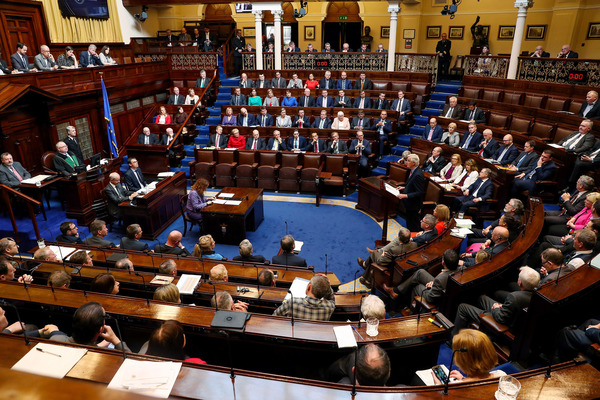 A meeting of Dáil Éireann. Picture by: Maxwells/Rollingnews,ie/pool

"A worry for Fine Gael"

Mr Brennan said that the poll would be worrying for the Tánaiste and his party:

“This is a difficult poll for Fine Gael,” Mr Brennan told Newstalk.

“They had a record low result last month in the Red C poll; they were down to 20% and they’re down now even further to 19% - another point.

“That’ll be a worry for Fine Gael because they always believed they would do better in Government than Fianna Fáil - they’re still ahead of Fianna Fáil on 16% but they’re miles behind Sinn Féin.”

Mr Brennan continued that Sinn Féin’s strategy of focusing on winning the votes of suffering from the rising cost of living is paying off:

“They know that people are facing higher energy bills, higher bills for the petrol and diesel at the pump,” he continued.

“And they’re constantly banging the drum of, ‘The Government should provide more support.’

“They’re on 33% and they’ve been at that level constantly.

“Certainly, the squeezed middle - people in that kind of 30-50 bracket seem to be plumping in a big way for Sinn Féin - I think the cost of living is a big factor there.”