Donald Trump's allegations of voter fraud in the wake of the US Presidential election have so far...

Donald Trump's allegations of voter fraud in the wake of the US Presidential election have so far been baseless, according to an Irish CNN journalist.

Donie O'Sullivan, who is from Kerry but reports on business for the American network, said that Trump's claims on social media in the last few days are further evidence he doesn't care if information is true or not as long as it supports his narrative.

Joe Biden was projected as the 46th President of the United States yesterday and has since vowed to unify Americans and heal deep divides across the country.

However, Mr Trump is refusing to concede and has vowed to launch legal action, challenging the legitimacy of the result by claiming - without evidence - voter fraud and ballot stuffing on a mass scale.

He was playing golf when the announcement was made, and has since proclaimed "I WON THE ELECTION" on Twitter, also claiming he won the most legal votes of any presidential candidate - which is actually a record set by Mr Biden.

Mr O'Sullivan told On The Record with Gavan Reilly how misinformation has been spread online this week.

He said: "What we're seeing the past few days is the President and his prominent supporters retweeting, reposting, and posting themselves, videos, images and articles which are all pretty much baseless but that allege some form of voter fraud.

"The day after the election, Eric Trump retweeted a video which purported to show a person setting fire to ballots which seemed to be cast for Donald Trump.

"Once we looked into it and once we spoke to election officials from Virginia which is the state where these ballots purported to be from, they were easily able to explain that this was a hoax video, they weren't real ballots because they didn't have the markings or serial IDs and codes that would be on real ballots.

"But that's the kind of stuff that is being shared right now and that is the sort of stuff which is being used as 'evidence' by Trump and his allies to say the election was rigged.

"In terms of Trump and his allies, I think he has shown over the last few years that he doesn't care if something is misinformation or not as long as it says and supports his narrative or the argument he is trying to make.

Mr O'Sullivan has been spending the last few days reporting from Harrisburg in Pennsylvania and during that time he saw the 'Stop The Steal' group go viral online.

He said: "It was mostly Trump supporters alleging that the election was stolen and people being told to get out to their state capitals or their count centres and say that this is a rigged election.

"I've spent the past few days hanging out with Trump supporters in Harrisburg at these Stop The Steal events and as I speak to them and say what is the evidence you have that this election was rigged, the first examples they're pointing to are these viral posts, two of which I was involved in fact-checking with CNN.

"These people are genuinely believing this as the reason that they are getting out and taking to the streets." 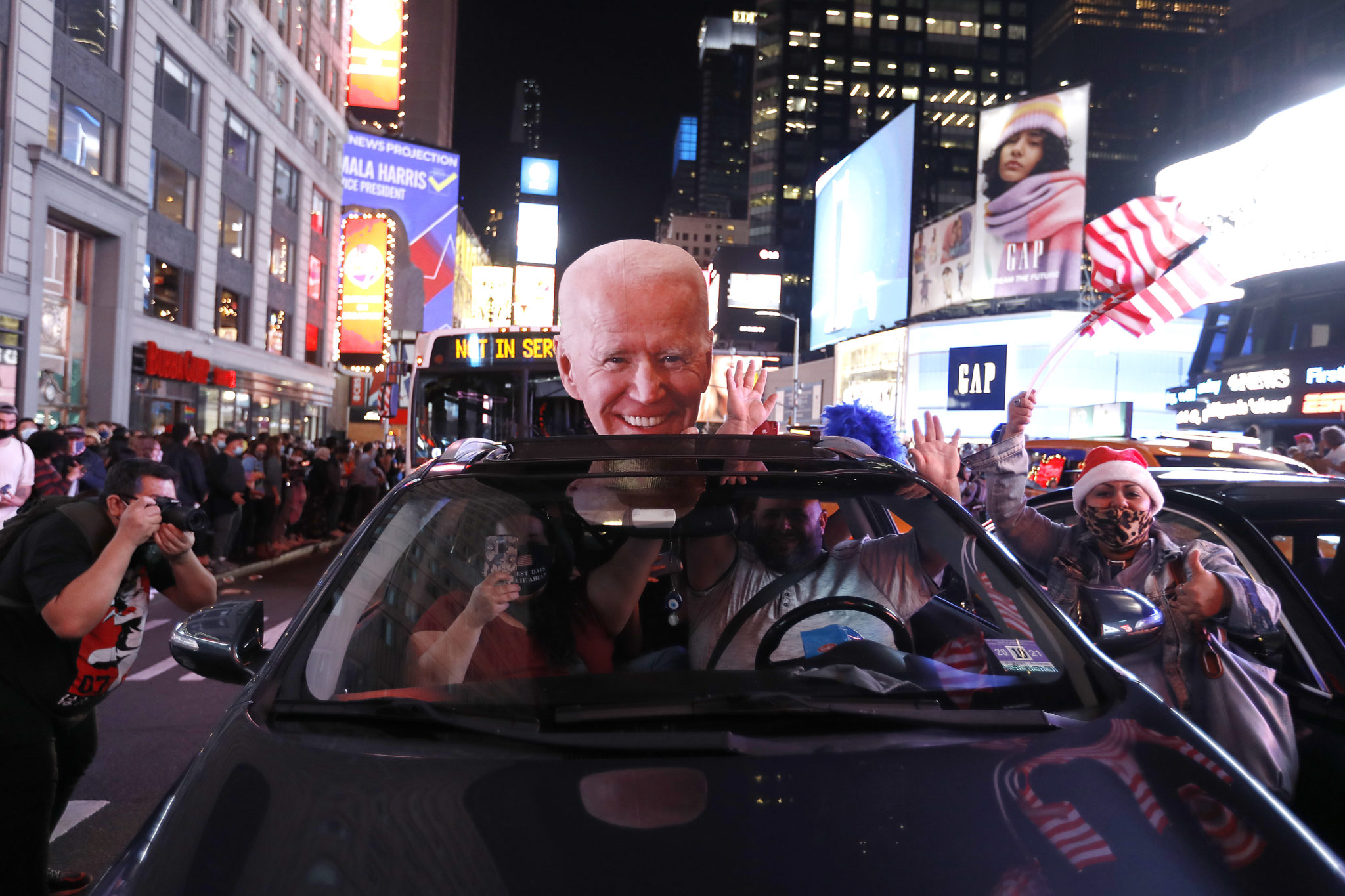 Supporters of President-elect Joe Biden and Vice-President-elect Kamala Harris drive their car with placards in the window through Times Square to celebrate their win over President Trump. Photo by John Lamparski / SOPA Images/Sipa USA

Mr O'Sullivan said that what we're seeing from the likes of Steve Bannon and others is that "there is a concerted effort to push misinformation and disinformation about the integrity of the election".

He said: "What individual Americans then end up doing as they consume that and share that further, most of the people I've spoken to are very genuine people, just Trump supporters who genuinely think the election was rigged.

"Then as I speak to them and explain to them that, oh the post you've mentioned about the ballots being burned, here's why that's false, the reaction to that is quite interesting.

"You'll sometimes have a supporter say, oh, wow I can't believe that was false I saw it all over my feed.

"The other people, it's like water off a duck's back, they'll say there's 200 other examples.

Mr O'Sullivan added "they don't have to believe me" and that while he can often be in "quite hostile territory" in such situations as a CNN reporter, people love him because he's Irish.

"I think it's quite disorientating for people when they see me with a CNN microphone and then I come out with a Kerry accent.

He said that many of Donald Trump's Tweets have been labelled as misinformation in recent days, which is a sign that the social media network is "really cracking down" on what he is sharing.

Mr O'Sullivan explained that Trump supporters don't see such actions as highlighting misinformation, rather they see it as the censoring of accurate information and a "coverup".

He said: "It's a very difficult battle for the truth to break through in this environment on social media."

Main image: Donald Trump arrives at a news conference at the White House in Washington, DC in July 2020. Picture by: Gripas Yuri/ABACA/ABACA/PA Images