The Department of Health has confirmed that 374 new cases of COVID-19 have been reported in Irela...

The Department of Health has confirmed that 374 new cases of COVID-19 have been reported in Ireland today.

The figures show that as of midnight on Saturday, there were 99 people being treated in hospital for the virus.

The five-day moving average is now 438, while the seven-day average is 415. 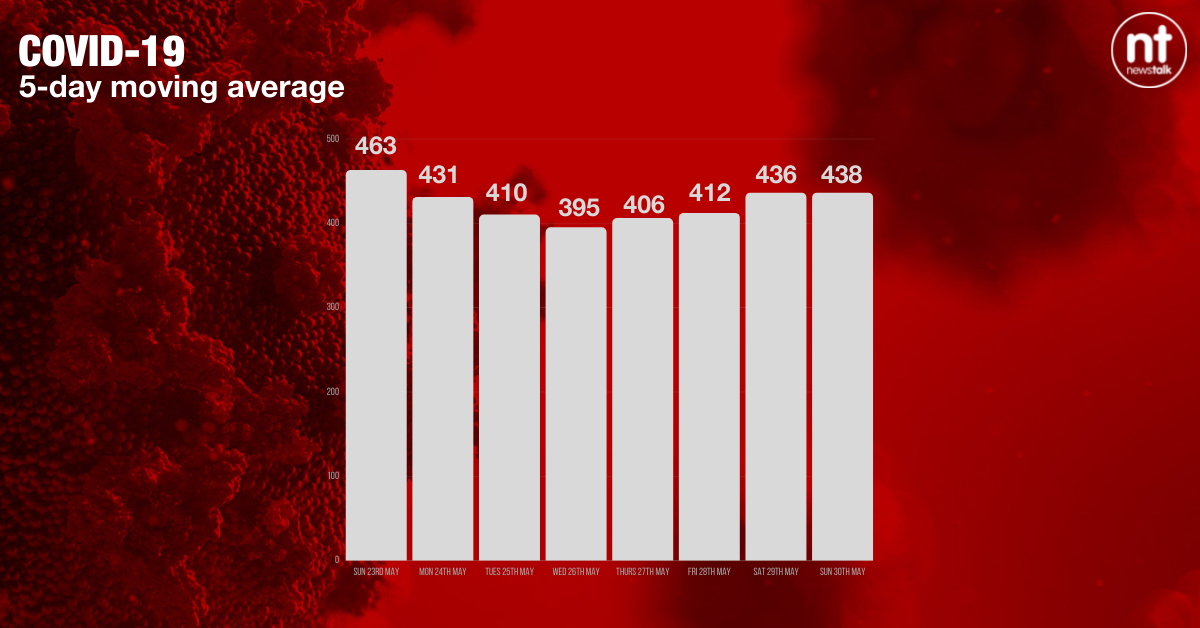 The CEO of the HSE Paul Reid said today that the vaccination programme in Ireland "is now making great headway".

He said there were more than one million doses administered in May and 2.7 million in total to date.

He added that 50% of the adult population had one dose, while "close to 20%" have had two doses.

It comes after the Chief Medical Officer Dr Tony Holohan said he was "absolutely shocked" by the scenes in Dublin city on Saturday night, describing them as a "major open-air party".

He added that it was not what the country needs given the progress that has been made in fighting the virus.

Gardaí said the arrests were made for public order offences in the South William Street area.

As public health regulations continue to be reduced & activity begins to normalise, we continue to remind the public of the ongoing public health guidelines, which include not to gather in large groups, maintain social distancing & wearing of face coverings in crowded areas. pic.twitter.com/J1sYfNNXI7

Large numbers of people who gathered in Temple Bar and St Stephen's Green were also dispersed by the force.

In a statement, Gardaí appealed to the public to avoid crowded areas and large gatherings and to continue adhering to the public health guidelines.

Following the scenes, the Minister for European Affairs appealed to the public to be cautious when socialising ahead of the easing of further restrictions next month.

Thomas Byrne said people need to be careful to ensure that the roadmap for reopening can go ahead as planned.

Main image: File photo of samples from people with suspected COVID-19 in a laboratory for further analysis. Photo: Sven Hoppe/dpa