Brendan Howlin's height, Mary Lou McDonald's age and Leo Varadkar's marital status were some of the top Google searches about the General Election by Irish voters in the last week.

The search engine has released details of what has been on people's minds ahead of next Saturday's vote.

Google Trends showed that in the last seven days, Sinn Féin was the most searched for political party, followed by Fine Gael, Fianna Fáil, the Social Democrats and Aontú.

The top searched question on party leaders was 'how tall is Brendan Howlin?'.

This was followed by questions about Mary Lou McDonald's age and hometown. 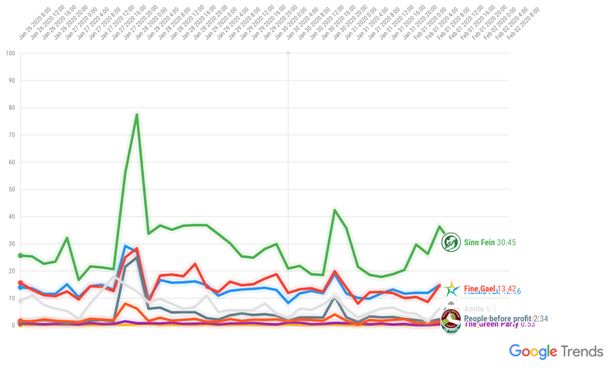 Top searched parties in Ireland in the last week according to Google Trends.

The top 20 most frequent questions were largely focused on Leo Varadkar.

With regard to the Fine Gael leader, people wanted to know his age, height and whether he was married, a landlord or a doctor.

Other searches questioned his salary, when he became Taoiseach, where his mother is from, which party he belongs to and what constituency he represents.

Queries relating to and Micheál Martin were similarly about his age and height, while people were curious about Green Party leader Eamon Ryan's age and marital status.

When it comes to the most searched questions on specific parties in the last week, the top posed questions were:

The areas where people were most interested in searching for General Election topics were Maynooth, Bray, Letterkenny, Malahide and Galway.

Labour 'swept away by tsunami of support' for Sinn Féin