A new book is to be published later this year about Seán Cox. Mr Cox was attacked outside Anfie...

A new book is to be published later this year about Seán Cox.

Mr Cox was attacked outside Anfield Stadium in Liverpool in April 2018.

The assault happened ahead of the team's Champions League semi-final against AS Roma.

Liverpool manager Jürgen Klopp has written a foreword for the book, which is entitled 'With Hope in Your Heart'.

Written by his wife Martina, along with Newstalk presenter Susan Keogh, the book recalls how on April 24th 2018 life was changed irrevocably for Martina and her family.

Seán was left unable to walk or talk following the 17-second brutal attack.

The book brings the story right up to date - with Seán returning to the family home for the first time in almost two years - just as the coronavirus lockdown took hold.

It tells how the support of community at home and from the extended Liverpool FC supporters helped the Cox family along the way. 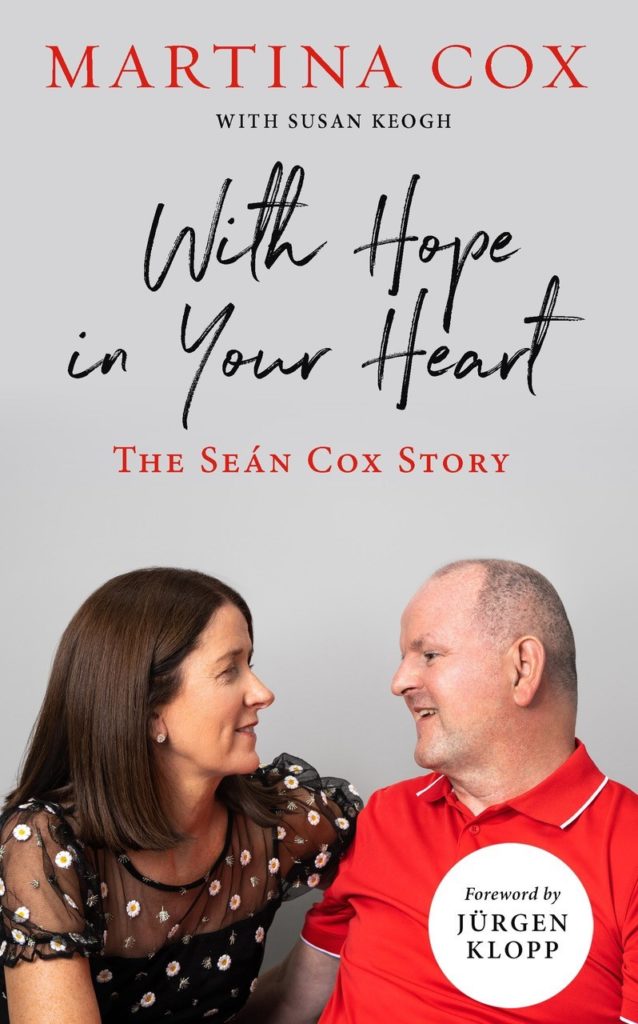 The cover of  'With Hope in Your Heart'. Picture: Supplied

The special place that Seán has in the hearts and minds of management, players and fans at the club was shown once again when Liverpool took home the Premier League title after a 30-year wait.

The club confirmed that the banner honouring Seán will be displayed in the famous Kop stand for the rest of the season.

At home, Seán is surrounded by his family and a team of carers every day.

Martina says she is hopeful for the future.

"The last two years have been unimaginably difficult but our love for Seán and determination that he gets the best care possible has kept us going.

"It has been an uphill battle but he is making progress every day.

"The book emphasises how, with the help of family, community, Liverpool and tens of thousands of people across the world who were touched by Seán’s story, we have achieved what was thought to be impossible and we are so grateful for that."

Newstalk Breakfast presenter Susan Keogh says: "It’s been the ultimate privilege to work with Martina over the past six months on this book.

"Through laughter and tears, we kept each other company during Ireland’s COVID-19 lockdown.

"I have been completely blown away by Martina’s strength and her commitment and love for Seán.

"As the whole country learns to readjust to a ‘new normal’ Martina and Sean’s story offers a valuable lesson about turning heartbreak into hope".

In his foreward, Mr Klopp writes: 'I often get asked about leadership in football but in “real life” I can think of no greater example of what a leader is than Seán’s wife, Martina.

'I have followed what she has done for her husband and her family and it has humbled me.’

Seán and Martina Cox have three children and live in Dunboyne, Co Meath.

While Seán requires full time medical care, is not likely to walk again and finds speech and many other daily tasks very challenging, his family are determined to give him the best treatments possible to ensure he can live as normal a life as possible.

The book will be published by Gill Books this October.

Main image: The cover of  'With Hope in Your Heart'. Picture: Supplied