An Irish MEP wants the Taoiseach to summon the US ambassador over the behaviour of President Dona...

An Irish MEP wants the Taoiseach to summon the US ambassador over the behaviour of President Donald Trump.

It is in the wake of his handling of the fallout from the death of George Floyd.

A wave of protests has swept across the country, with Mr Trump threatening to deploy the US military to tackle violence.

Fianna Fáil MEP Barry Andrews has told The Hard Shoulder Ireland should use the close ties between the countries to outline concerns about the US president.

"The president of the United States is using language which is incendiary, which is deepening the tensions, deepening the divisions in the United States, talking about 'if looting starts, shooting starts', using the bible as a prop and the methods that he's using: teargas against peaceful protesters, threatening to use active duty troops against American citizens and attacking journalists.

"Not just in word, as he has done throughout his presidency, but now physically attacking journalists who are trying to report what's going on to the wider public.

"And I think the nature of the man is a very serious concern.

"He's surrounded, as we know, by sycophants who tell him what he wants to hear.

"And I believe that we are no friend of the United States if we assume the same cringing posture that his advisers are clearly assuming at this stage.

"I profoundly believe that our friends in the US will thank us for being frank, and I think that's what the Taoiseach should convey to the US ambassador". 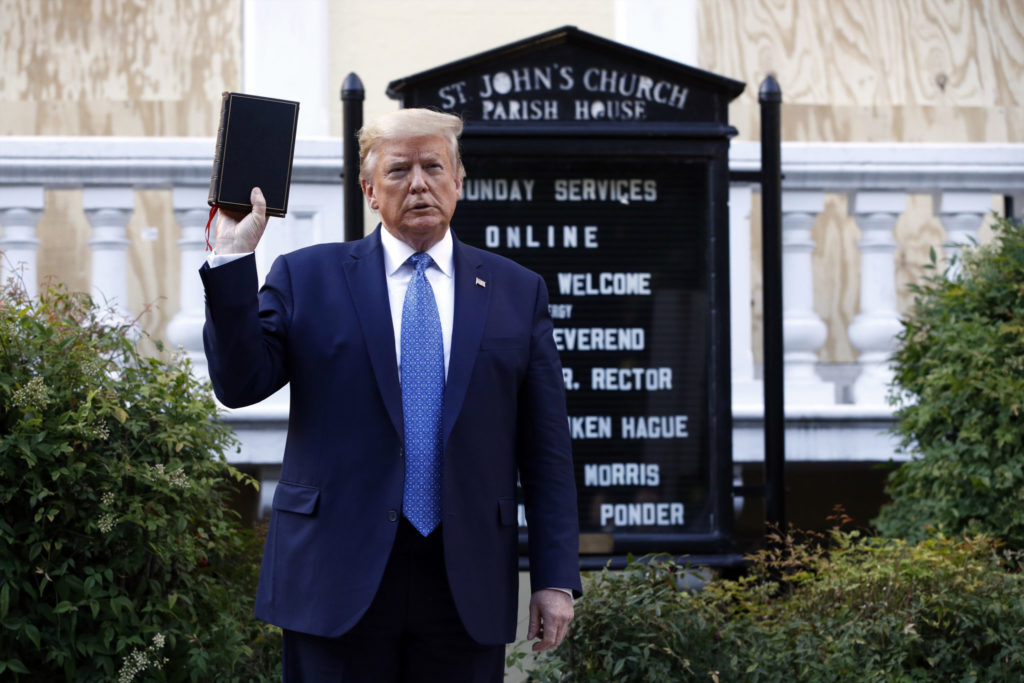 US President Donald Trump holds a bible as he visits outside St John's Church across from the White House Monday in Washington. Picture by: Patrick Semansky/AP/Press Association Images

"I think that we say that what we've seen over the last few days is thoroughly unacceptable, we're a friend of the United States, we have a centuries old relationship with the US and... I don't believe it is in the nature of that friendship to to simply say nothing.

"I think we've gone over certain red lines in the way that President Trump is dealing with this crisis.

"This belongs in a pattern of behaviour, particularly towards the European Union and towards multilateralism which is extremely hostile - whether it is defunding the World Health Organisation, whether it is failing to appoint appellate judges in the World Trade Organisation or undermining the Paris Climate Agreement".

President Trump called on State Governors there to deploy the national guard to end the “riots and lawlessness that have spread throughout our country.”

He said he would send in the US military to any state that refused to do so.

The protests against racism and police brutality have been ongoing for the six nights since the death of George Floyd at the hands of the Minneapolis police.

The unarmed black man died after police officer Derek Chauvin knelt on the back of his neck for nearly nine minutes on May 25th.

Video of the incident shows Mr Floyd repeatedly saying “I can’t breathe,” to the policeman, who has since been fired and charged with third-degree murder and manslaughter.

In Dublin hundreds of people gathered outside the US embassy on Monday.

Main image: A demonstrator is taken into custody by police after a curfew took effect during a protest over the death of George Floyd near the White House in Washington. Picture by: Alex Brandon/AP/Press Association Images