The British Prime Minister Boris Johnson has told the UK parliament it is 'paralysed'. He address...

The British Prime Minister Boris Johnson has told the UK parliament it is 'paralysed'.

He addressed MPs following a British Supreme Court ruling on Tuesday, which found that his earlier suspension of the parliament was unlawful.

In their unanimous decision, the 11 judges found that prorogation was "void and of no effect".

Their judgement stated they had been presented with no reasons - “let alone a good reason” - for the five-week suspension of parliament in the weeks leading up to the October  31st Brexit deadline.

Mr Johnson was heckled at the beginning of his speech in the House of Commons on Wednesday evening, with one MP shouting that he should be in jail.

He challenged opposition parties to call a confidence vote that could trigger a general election there.

"And we can have that vote tomorrow," he said.

"This parliament must either stand aside and let this government get Brexit done - or bring a vote of confidence and finally face the day of reckoning with the voters".

UK Labour leader Jeremy Corbyn responded that Mr Johnson's statement was 'null, and should be quashed' - likening it to his decision to suspend parliament.

He also repeated his demand for Mr Johnson to resign following the Supreme Court ruling: "For the good of this country he should go."

"Surely the prime minister can have the humility to say sorry for misleading the queen, misleading the country and illegally shutting down our democracy".

The SNP's Westminster leader Ian Blackford told MPs his party "fully supports" stopping a no-deal Brexit as their "priority", as he also called for Mr Johnson to resign.

He also floated the possibility of an "interim" prime minister seeking an Article 50 extension from the EU "to take back control and to protect our economy from the cliff edge". 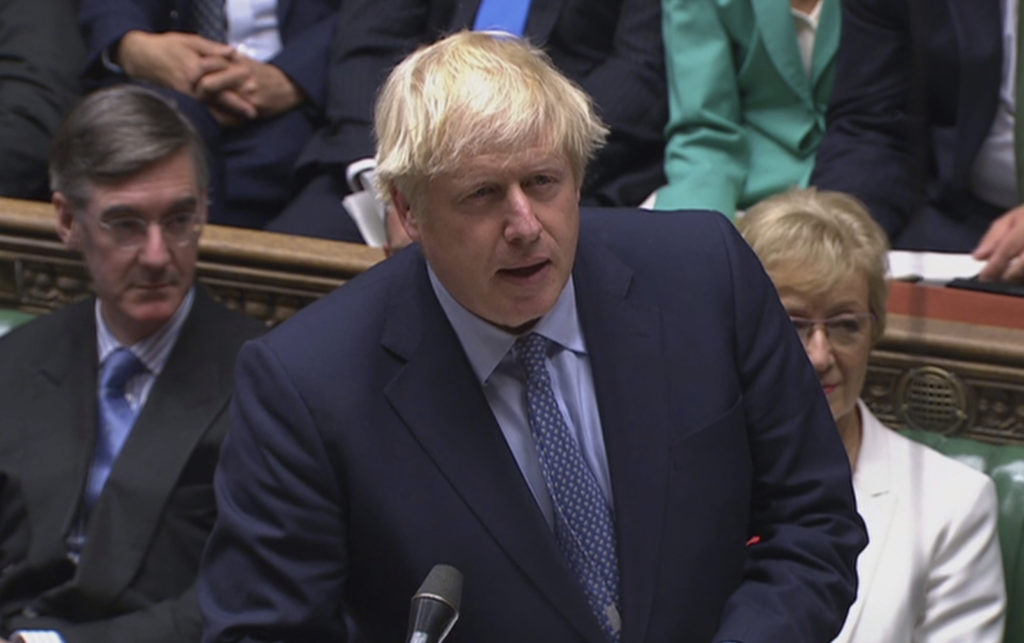 Politicians rushed back to London for the sitting, where the agenda gave MPs an opportunity to question the British government on issues such as Brexit and other topical issues.

The SNP's Joanna Cherry - who took one of the cases that led to the Supreme Court hearing - demanded Mr Cox disclose the full details of the guidance he gave.

He suggested: "The government accepts the judgement, and accepts that it lost the case.

"At all times the government acted in good faith, and in the belief that its approach was both lawful and constitutional."

Mr Johnson was in New York when the ruling was handed down.

Opposition leaders and parties have called for him to resign in the wake of the court's decision.

Addressing party members at the Labour annual conference on Tuesday, Mr Corbyn insisted Mr Johnson's government "will be held to account for what it has done".

The opposition leader argued: "[Boris Johnson] thought he could do whatever he liked just as he always does. He thinks he’s above us all.

"He is part of an elite that disdains democracy. He is not fit to be prime minister."

Criticism has also been directed at Mr Johnson's senior adviser Dominic Cummings and  Geoffrey Cox for their apparent roles in the prorogation decision.

Speaking in New York before his departure, he claimed he is now going to get on with making sure Brexit happens.

He suggested: "We in the UK will not be deterred from getting on and delivering on the will of the people to come out of the EU on October 31st - because that is what we were mandated to do."

Mr Johnson met with Taoiseach Leo Varadkar on Tuesday, only hours after the Supreme Court decision was handed down.

The Taoiseach said the meeting was a useful exchange – but warned that there is still a huge amount of work to do if a deal is to be struck by the end of October.

Leo Varadkar says he had a good meeting with Boris Johnson this afternoon but the two are still very far apart on a deal pic.twitter.com/68whsAFbuu