The UK Supreme Court has ruled that Prime Minister Boris Johnson's decision to suspend parliament for five weeks was unlawful.

The 11 judges made a unanimous ruling.

President of the British Supreme Court Brenda Hale said the judges concluded the cases were justiciable.

She said the prorogation took place in 'quite exceptional circumstances' ahead of the Brexit deadline - and parliament had a right to a voice.

On the prorogation itself, she explained there was "no justification for taking action with such an extreme effect" put before the court.

She said: "The Court is bound to conclude, therefore, that the decision to advise Her Majesty to prorogue Parliament was unlawful because it had the effect of frustrating or preventing the ability of Parliament to carry out its constitutional functions without reasonable justification.

"The order in Council to which it led was also unlawful, void and of no effect and should be quashed.

"The prorogation was also void and of no effect - parliament has not been prorogued. This is the unanimous decision of all 11 justices."

In their judgement, the justices said: "It is impossible for us to conclude, on the evidence which has been put before us, that there was any reason - let alone a good reason - to advise Her Majesty to prorogue Parliament for five weeks, from 9th or 12th September until 14th October."

Reacting to the ruling, Boris Johnson told reporters in New York that he didn't think the court's decision was the right one.

He argued: "It's perfectly usual to have a Queen's Speech - that's what we want to do.

"We have a parliament that is unable to be prorogued, that doesn't want to have an election... and I think it's time that we took things forward."

He added that while he "strongly disagrees" with the court's decision, his government will respect the decision and parliament will resume.

Speaking shortly after the ruling the speaker of the UK House of Commons, John Bercow, said it will sit again on Wednesday at 11.30am.

In an earlier statement, Mr Bercow said parliament "must convene without delay" - adding that he would consult with party leaders as "a matter of urgency".

"The judges have rejected the Government’s claim that closing down Parliament for five weeks was merely standard practice to allow for a new Queen’s Speech.

"They have vindicated the right and duty of Parliament to meet at this crucial time to scrutinise the executive and hold Ministers to account. "

Opposition politicians - including Labour leader Jeremy Corbyn - have called on Mr Johnson to resign in the wake of the ruling.

Scottish National Party MP Joanna Cherry - who took one of the cases - said it was a huge victory for the rule of law and democracy, and called on Boris Johnson to step down. 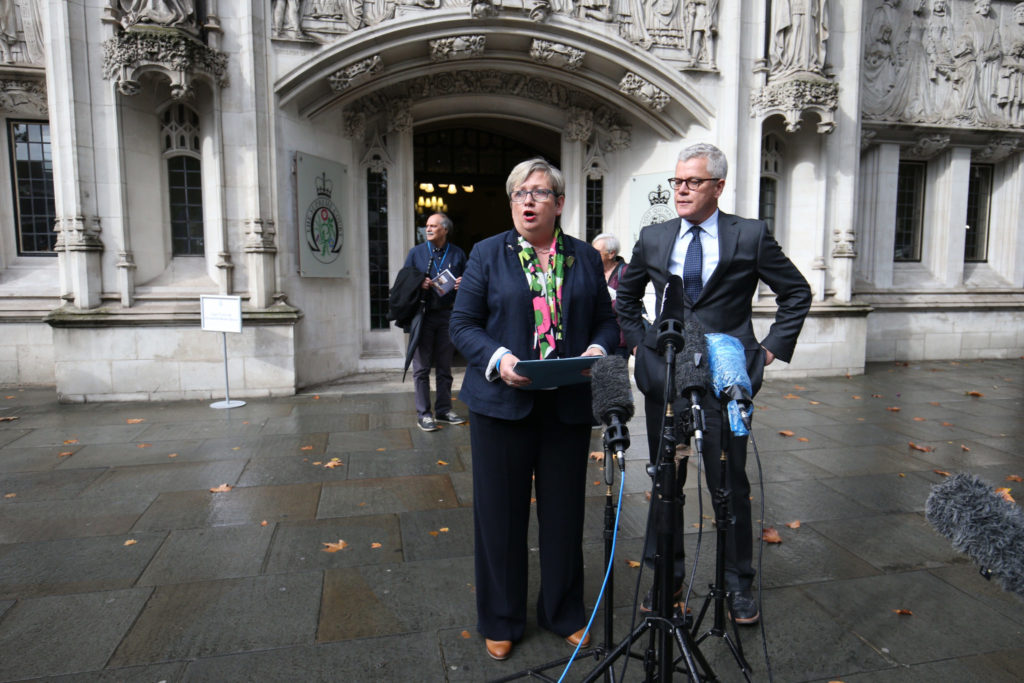 SNP MP Joanna Cherry and lawyer Jolyon Maugham speaking to the media outside the Supreme Court in London, where judges have ruled that Prime Minister Boris Johnson's advice to the Queen to suspend Parliament for five weeks was unlawful. Picture by: Jonathan Brady/PA Wire/PA Images

It means MPs are not sitting for more than a month in the lead-up to the current Brexit deadline of October 31st.

Boris Johnson has insisted the five-week break is a routine move to allow for a Queen's Speech to set out his new government's agenda.

However, opponents of the move have claimed the move is aimed at silencing the parliamentary debate on Brexit.

The case was taken to the UK's Supreme Court after two conflicting rulings in lower courts.

However, judges at the High Court in England - in a case taken by anti-Brexit campaigner Gina Miller - had earlier found Mr Johnson's decision was a 'purely political' one and dismissed the case.

Main image: Anti-Brexit supporters react as they gather outside the Supreme Court in London. Picture by: Frank Augstein/AP/Press Association Images