Republic of Ireland captain Katie McCabe has said she wants to lead both "on and off the pitch" a...

Republic of Ireland captain Katie McCabe has said she wants to lead both "on and off the pitch" as Vera Pauw's side get set for a pair of crucial EURO 2021 qualifiers this week and next.

Greece are the visitors to Tallaght Stadium this Thursday night, with a trip to Montenegro on the horizon on Wednesday of next week. The Irish team currently sit second in qualifying Group I after picking up two wins and a draw from their opening three games.

One player undoubtedly at the height of her profession right now is 24-year-old Dubliner Katie McCabe, who along with international teammate Louise Quinn, is a regular with Arsenal in the Women's Super League (WSL) cross-channel.

McCabe spoke to Off the Ball's Shane Hannon in the build-up to this Thursday's crucial game, and said they are pretty pleased with how they have fared so far in the group, as well as the increased competition for places within the squad.

"Obviously we started off the campaign really well with the two wins and we were very frustrated over in Greece to concede the late equaliser. We're really looking forward to Thursday night, it's been great being back in with the girls.

"All these headaches are good headaches to have. The quality of players we have at the minute is fantastic to see. Obviously there's Rianna [Jarrett] scoring two goals on her debut [for Brighton last week], I actually told her to stop scoring and to save them for Thursday night!

"It's great to see the girls doing really well and to have the squad go from strength to strength is fantastic and only brings us confidence now into Thursday."

The Kilnamanagh native was made captain by Colin Bell back in 2017 and McCabe says that experience has stood to her as her career has progressed.

"Obviously I was made captain at a young age but I think if I didn't have those really experienced players to help me and guide me I wouldn't be where I am today.

"For me what's important is to not just lead off the pitch but to lead on the pitch and produce and help score goals and help us win games. That's my main concentration, obviously it's great that we have such a dynamic squad now and we're going from strength to strength - it's a really exciting time for us."

McCabe will have watched a number of her Arsenal teammates playing at the most recent World Cup, and helping this Irish team qualify for its first-ever major tournament is a definite ambition for this current crop of players, especially given the rise in attendances and support for the team. 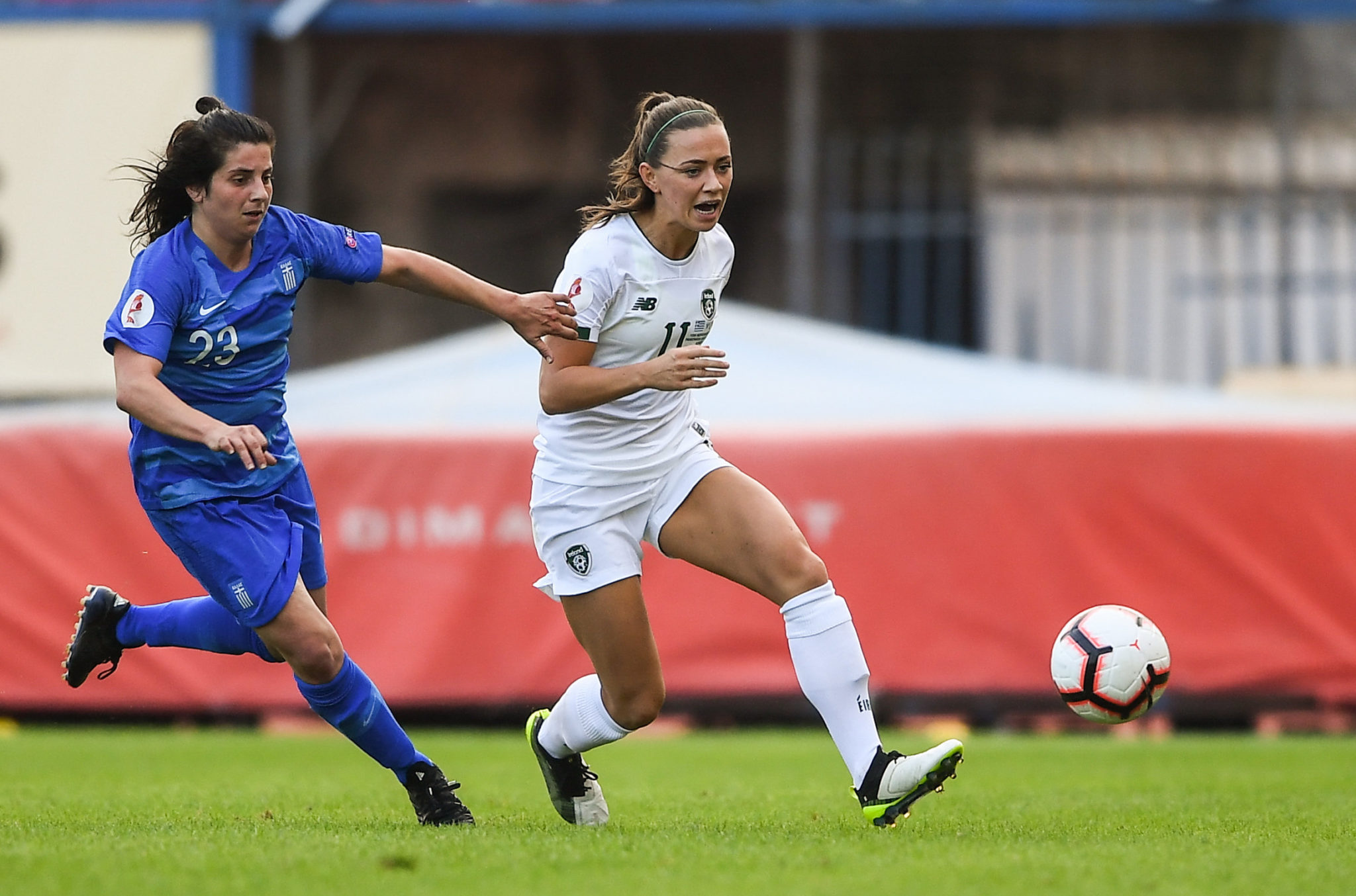 12 November 2019; Katie McCabe of Republic of Ireland in action against Christina Kokoviadou of Greece during the UEFA Women's 2021 European Championships Qualifier - Group I match between Greece and Republic of Ireland at Nea Smyrni Stadium in Athens, Greece. Photo by Harry Murphy/Sportsfile

"It's our goal, that was our goal that we set at the start of the campaign. But what's most important now is Thursday night, if we don't attack it there's no point thinking about England [EURO 2021] that far away.

"Playing in front of those crowds, that's why we play the game. We want to be playing in front of 5000, 6000, even more than that. We know how important those supporters are... even the Ukraine game [3-2 win in October], I know for a fact they got us over the line in that game and made us get the three points. I'm hoping they do the same now on Thursday night."

At club level McCabe has a number of big games on the horizon - not least an FA Cup quarter-final against north London rivals Tottenham and Champions League last-eight ties against PSG, and she says having a busy period is good for a players' focus.

"Playing those really big games you're at the height of your performance, and if you're performing at your highest level week in, week out then it helps when there is a massive game like on Thursday night. We're flying to get over the line then!"

You can still purchase tickets for Thursday night's qualifier against Greece here on the FAI website, with over 5000 tickets sold as of yesterday.