The Republic of Ireland broke their record for most goals scored in a single game, as they hammer...

The Republic of Ireland broke their record for most goals scored in a single game, as they hammered Georgia to move second in Women's World Cup qualifying Group A.

A hat-trick from Denise O'Sullivan, and two from Katie McCabe helped Vera Pauw's side to an 11-0 win on a blustery night at Tallaght Stadium.

After last week's disappointing draw with Slovakia, Pauw had labelled the Georgia game as "must-win".

But there were just three-and-a-half minutes on the clock when the deadlock was broken, and it was already evident this was a night to improve Ireland's goal difference.

Katie McCabe sent a customary searching ball from the left flank across the Georgian six-yard box, and 18-year old Maiko Bebia headed into her own net in attempting to guide the ball out for a corner.

Ireland 1-0 Georgia
Great start for Ireland as Maiko Bebia turns the ball into her own net after Katie McCabe whips a great cross across the Georgia goal#IRLGEO #RTEsoccer
📺https://t.co/2W5kFtUgZE
📻https://t.co/QHSJNYlfx8
📱https://t.co/s4K86Eg3Fi pic.twitter.com/vh4tOpO2DR

It likely should have been 2-0 inside two minutes, when Kyra Carusa opted to stoop to head, rather than putting a toe to a cross from the right from Lucy Quinn.

As Ireland continued the pressure, McCabe drew a save from the feet of Georgian keeper Teona Sukhashvili from a clever free-kick routine.

Sukhashvili had to produce a fine save low to her right, moments later, from a deflected Lucy Quinn shot from just outside the box.

Ireland finally found their second in the 21st minute. McCabe's in-swinging corner was met initially by the head of Louise Quinn, before Carusa's head flicked the ball beyond the each of the Georgian keeper.

Ireland's pressure was such that their back-three were able to patiently pass the ball around inside the Georgian half. And it was their probing that saw Denise O'Sullivan and Katie McCabe link up with the latter's cross smartly converted by Lucy Quinn. 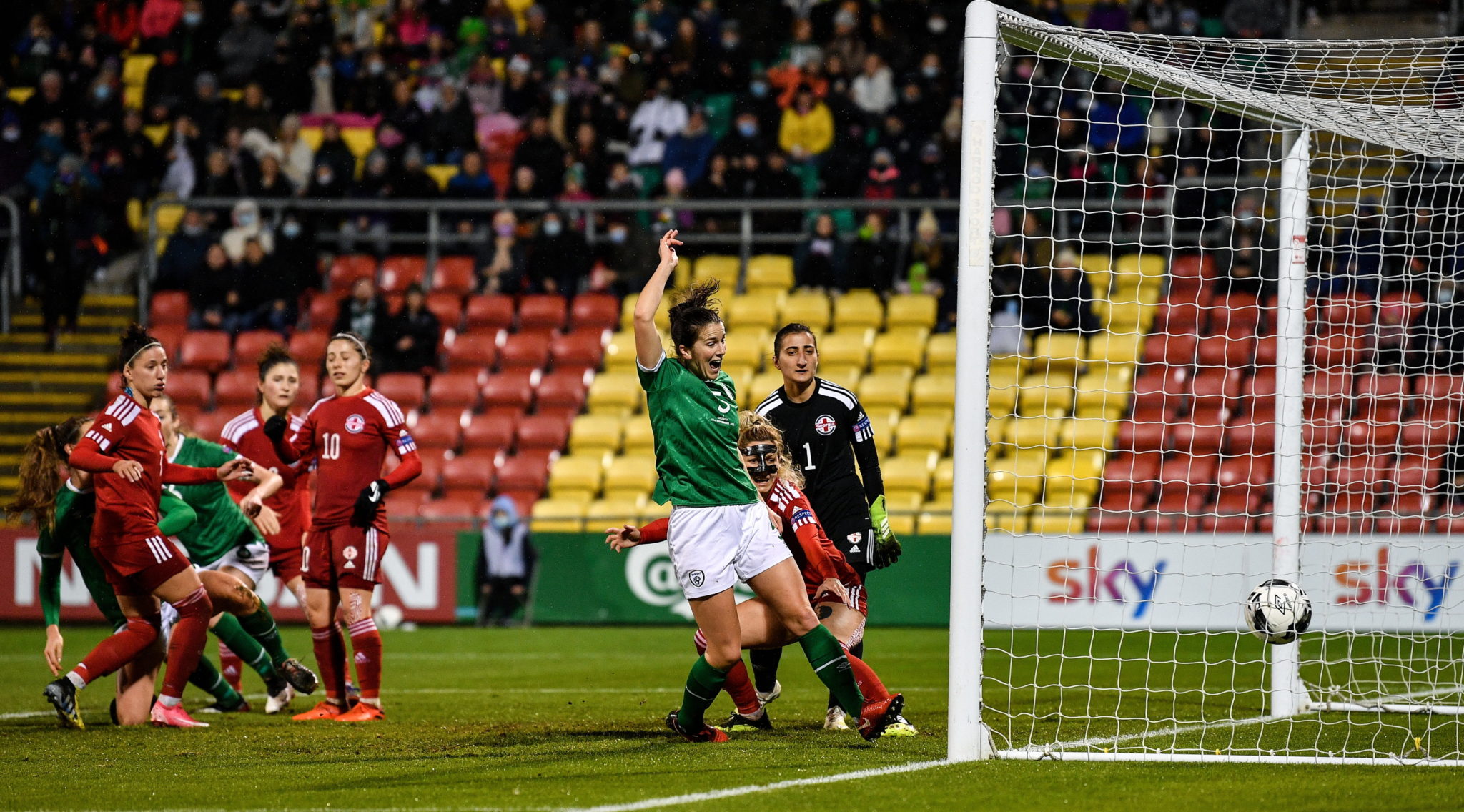 30 November 2021; Niamh Fahey of Republic of Ireland celebrates her side's second goal, scored by Kyra Carusa, during the FIFA Women's World Cup 2023 qualifying group A match between Republic of Ireland and Georgia at Tallaght Stadium in Dublin. Photo by Eóin Noonan/Sportsfile

The fourth came on the stroke of half-time. Ruesha Littlejohn was allowed sail through the Georgian defence before squaring for O'Sullivan, who made no mistake from close range.

Sukhashvili produced a pair of fine saves inside the first two minutes to deny Ireland a fifth - first from Katie McCabe, and then with an acrobatic effort to deny a curling long-range effort from Denise O'Sullivan.

O'Sullivan did put one beyond the reach of the keeper 13-minutes into the second half. She claimed the ball on the edge of the Georgian area, spun and sent an unstoppable shot into the top left hand corner of the net.

O'Sullivan's hat-trick was secured just after the hour mark as she headed home another McCabe cross.

The Georgians were - frankly - awful, but Ireland refused to take their foot from the pedal.

McCabe added her name to the scoresheet 20-minutes from the end from the penalty spot. Bebia's rotten night bottomed-out when she was shown a red card for handball. The Arsenal winger cooly slotted the ball to Sukhashvili's right to make it 7-0, and Ireland were closing in on equalling their record win.

Fed by Roma McLaughlin just outside the Georgian box, McCabe made it 8-0 with a powerful low shot inside the hapless keeper's near post. 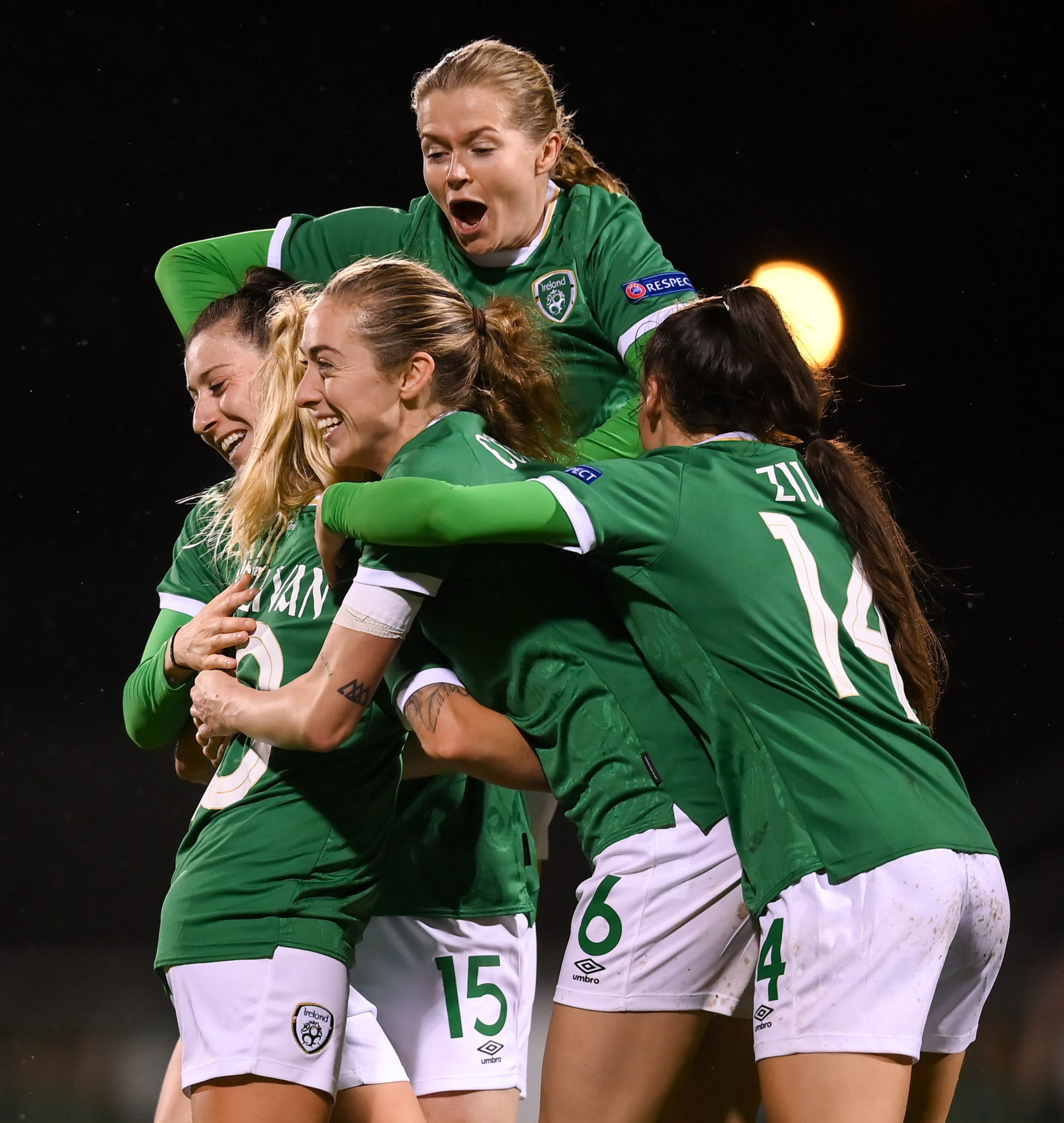 To her credit, Sukhashvili produced a fine save to deny McCabe her hat-trick ten minutes from time. But from the resulting corner, Diane Caldwell's header was cleared off the line only for substitute Saoirse Noonan to smash home Ireland's ninth - equalling their record of most goals scored.

Amber Barrett turned out to be Ireland's record-breaker. As the chants of 'we want ten!' swirled around Tallaght, Barrett ghosted in at the far post to make it 10-0.

And the goalscoring was completed in injury-time, with Megan Connolly's hopeful free-kick evading everyone - including her teammates - to nestle in the Georgian net.

Ireland end the year second in Group A, with a goal difference one better than leaders Sweden. They'll reconvene in April, when the Swedes await on their own turf.