On The Saturday Panel this week four inter-county managers from this season's football championsh...

On The Saturday Panel this week four inter-county managers from this season's football championship joined Nathan in the studio to discuss a wide range of issues, from the championship structures to disciplinary proceedings and disparity in GAA funding.

It was the issue of Dublin's funding and the widening gap between them and the rest which brought quite a bit of debate.

Dublin gathered almost €18m in games development funding from 2007-18, with Cork the next highest on €1.4m. Last year Dublin received 22% of the Games Development Fund, and in commercial revenue earned €1.46m in 2017, more than twice that of their closest rival financially.

John Evans, manager of a Wicklow side that lost out narrowly to both Kildare in the Leinster championship and Leitrim in the qualifiers this year, thinks the figures are mind-boggling.

"It's like throwing apples into an orchard, the orchard is already full! What are you doing? There are clubs down in Kerry who are trying to bring fellas down from Cork and Dublin to play games for them, and they don't have the funding for it." 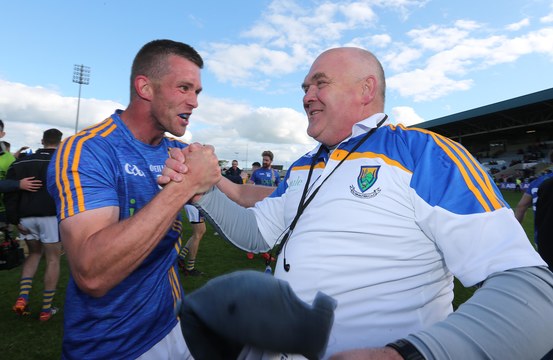 Wicklow's Rory Finn and John Evans celebrate at the final whistle of their win over Offaly in the Leinster championship last year.

O'Brien meanwhile says the GAA could take a leaf out of the NFL's book with some form of draft system to level the playing field.

"We need some kind of positive discrimination in the GAA towards the lower-ranked teams - probably in funding. It's very strange for the strongest to get the most support when it's not needed."

The 'drive for five' is, without doubt, the main reason why the conversation around Dublin's funding is at such a fever pitch level right now, and yet Liam Kearns is of the opinion that people should hold off jumping the gun on drastic measures to even the scales.

"I think this conversation regards Dublin is too soon for me anyway. There are other counties like Kerry who have done four-in-a-row, there's Kilkenny in hurling who have done four-in-a-row. Dublin are going for five-in-a-row. I think if they're getting to six and seven... I'll put it to you this way if they get beaten this year will there be the same amount of interest in talking about Dublin and what they're doing?"

Turlough O'Brien however says the trophies don't actually matter - it's the simple fact that Dublin are getting more money than everyone else.

"Whether they have the success or not, they're getting the funding, and the disparity is just too big at the moment."

"We [in Carlow] just don't have the resources or money to look after our county team as well as other counties. We wanted a training weekend but couldn't afford it. We went to St Sylvester's for the day, the hurlers went to Tramore. They're the realities of it, we're not going to France to look at World War One graves.

"It's a different level, we'll always struggle. And that's the fear too with a tiered championship - if you're playing an extended season through a tier two competition that nobody wants, you've extended your cost base as well. It puts more pressure on the county boards, so I don't know if it's going to be attractive for county boards." 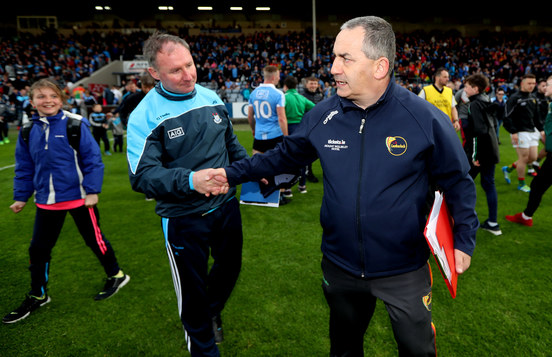 The argument that Dublin have more (or more committed) volunteers is one that has been bandied around of late, with Jim Gavin saying recently it was "insulting" to say funding made these Dublin players into what they are. John Evans used the example of his native Kerry to shoot down that argument.

"It is less money they should be getting! They have bars, they have pitches, they have the numbers here. So to me it doesn't make sense.

"You go down to Dr. Crokes and the Gooch is there, Pat O'Shea is there, Johnny Buckley is there. You go over to Laune Rangers and Peter Crowley is there, you go to [Austin] Stacks and Donaghy is there. There's volunteerism all over the place - however, we're not getting the financial end of it. Don't anybody cod yourself!"

Louth exited the championship in disappointing fashion this year. Having beaten Wexford by five points in the Leinster preliminary round, they were pummeled by Jim Gavin's Dublin on a 5-21 to 0-10 scoreline, before a meek exit at home to Division Four Antrim.

Their manager Kierans says if counties are given the same financial resources as the capital county, county boards need to be sure they know how to spend it properly in order to give smaller sides a chance of success.

"All our own counties have to look at ourselves and think, if we get an increased budget over the next couple of years, are we going to spend it in the proper way?"

How do fellow Leinster counties and those around the country level the playing field and halt Dublin's dominance?

We tackled the issue on Off The Ball's Saturday Panel. Full Discussion from today's show 👉https://t.co/bWKmZsxQOQ

It wasn't all negative around the Dubs either though, with O'Brien keen to stress that it's not the teams' fault.

"They're not just a good team, the way they carry themselves. They're brilliant people, they're so committed to it. Dublin GAA people traditionally have been generally great GAA people. They are a superb team  - but there are other issues too."

Wicklow boss Evans echoed that sentiment, pointing the finger more at administrative figures who provide the money to Dublin in the first place.

"Don't be blaming the Dublin football team for this - this is the structure they've set up. They have the money to do it. If [GAA President] John Horan or [Dublin County Board Chief Executive] John Costello come on and they want to throw a bucket of water over the fire [and say] that they're not financially advanced, I think it's inflaming it. I think they're throwing petrol on it by denying it like."