Irish-language broadcaster Hector Ó hEochagáin says the Irish language needs a facelift, and should be worth more in the Leaving Certificate exams.

He was speaking as some 15,000 students are taking part in the Gaeilge24 challenge with Conradh na Gaeilge.

Their task is to talk Irish only for the entire day.

Hector told Newstalk Breakfast that such initiatives are good to see, but be careful how you word it.

He hit out at the expression of 'keeping the language alive'.

"I think it's an easy term to say about something - but we're not talking about an endangered spices of white rhino in an African country.

"It's never been more alive in the Gaelscoils and all over the country, on TG4 - so I just don't like that term.

"We're not talking about a frog that's only in a marshy part of Belmullet, that there's only six of them left in the country.

"We're not 'keeping the language alive', we are alive - God knows this year we need to be more alive than ever.

"And it's easy for people - and it's the same old people hammering the Irish language on the keyboards every year going 'Why do we do this, why do we do that' - but it is a great language, it's a living language and it's out there". 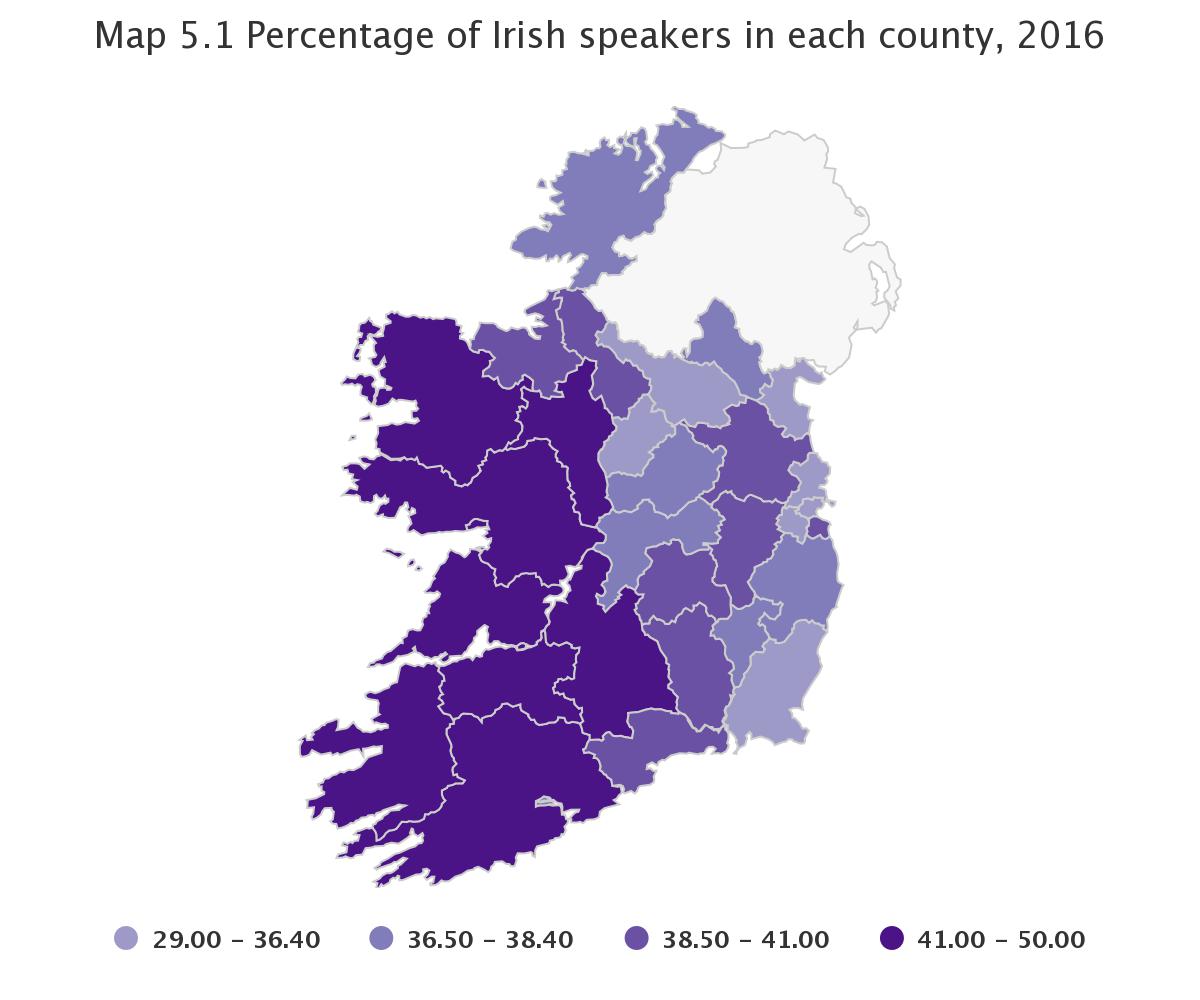 Percentage of Irish speakers in each county for 2016. Source: CSO

Host Ciara Kelly asked him about the perception of the language for older generations where it was 'a chore and inaccessible'.

Hector said the Department of Education needs to move on this.

"We need to catapult the language into the 21st century, we need to funk it up.

"Peig Sayers was a mighty, wild, brilliant, hippy woman that lived on the Blasket Islands - we need to give her a new lease of life.

"The Department of Education needs to take this language and the way its taught and bring it a fresh outlook.

"It took them 20 years almost to decide that students in the Leaving Cert could get 50% for speaking the oral Irish exam [but] it should be 75%.

"I know text and prose and poetry all that has its place, but the living language is where we're at.

Of those who said they were able to speak Irish, 418,420 indicated they never spoke it - while a further 558,608 say they only spoke it within the education system.

Galway city and its suburbs had the highest rate of Irish speakers (41.4%) followed by Cork city and suburbs (40.9%).

The lowest rate for a city was recorded for Dublin city and suburbs (32.8%).

Of the other urban areas, smaller towns with populations of less than 1,500 persons had the highest rate of Irish speakers at 40.8%.

Rural areas had the highest rates of all with 44.6% of the population were able to speak Irish.

Main image: Presenter Hector O'hEochagain on top of a roof on Merrion Row, Dublin in 2003, Picture by: RollingNews.ie