Thousands of people have hit the streets of Dublin for the city’s first Pride parade since 2019...

Thousands of people have hit the streets of Dublin for the city’s first Pride parade since 2019.

Usually the social highlight of the year for LGBT Irish people and their allies, COVID forced the celebrations online and for many young people it was their first in person parade:

“Even to be able to come and be part of the parade on the streets is a hugely important thing for someone who has felt that isolation and that loneliness,” Aifric Ní Chríodáin, Director of ShoutOut, the LGBT youth charity, explained to Newstalk.

“And I think most of us growing up queer would have felt that loneliness and it hurts to think of anyone feeling it now but we’re really glad that they can be part of the parades today in some way, whatever way is safest and most comfortable for them.

Ready for the parade to kick off with Taoiseach @MichealMartinTD and Grand Marshal @BexDeHavilland pic.twitter.com/tdeR2RmnwB

Political leaders were also marching, including Taoiseach Micheál Martin and Tánaiste Leo Varadkar - the first dressed in a sensible suit, while the later wore his favourite red t-shirt.

So too was the newly elected Mayor of South Dublin, Cllr Emma Murphy, who made history this week when she became the nation’s first out LGBT woman to serve as a local authority mayor:

“The sentiments of me being the first female LGBT local authority Mayor is not lost on me,” she said.

“It’s something that I am very humbled by and hope that it opens more doors for women and members of the LGBT community to come forward and get involved and engaged in political life.” 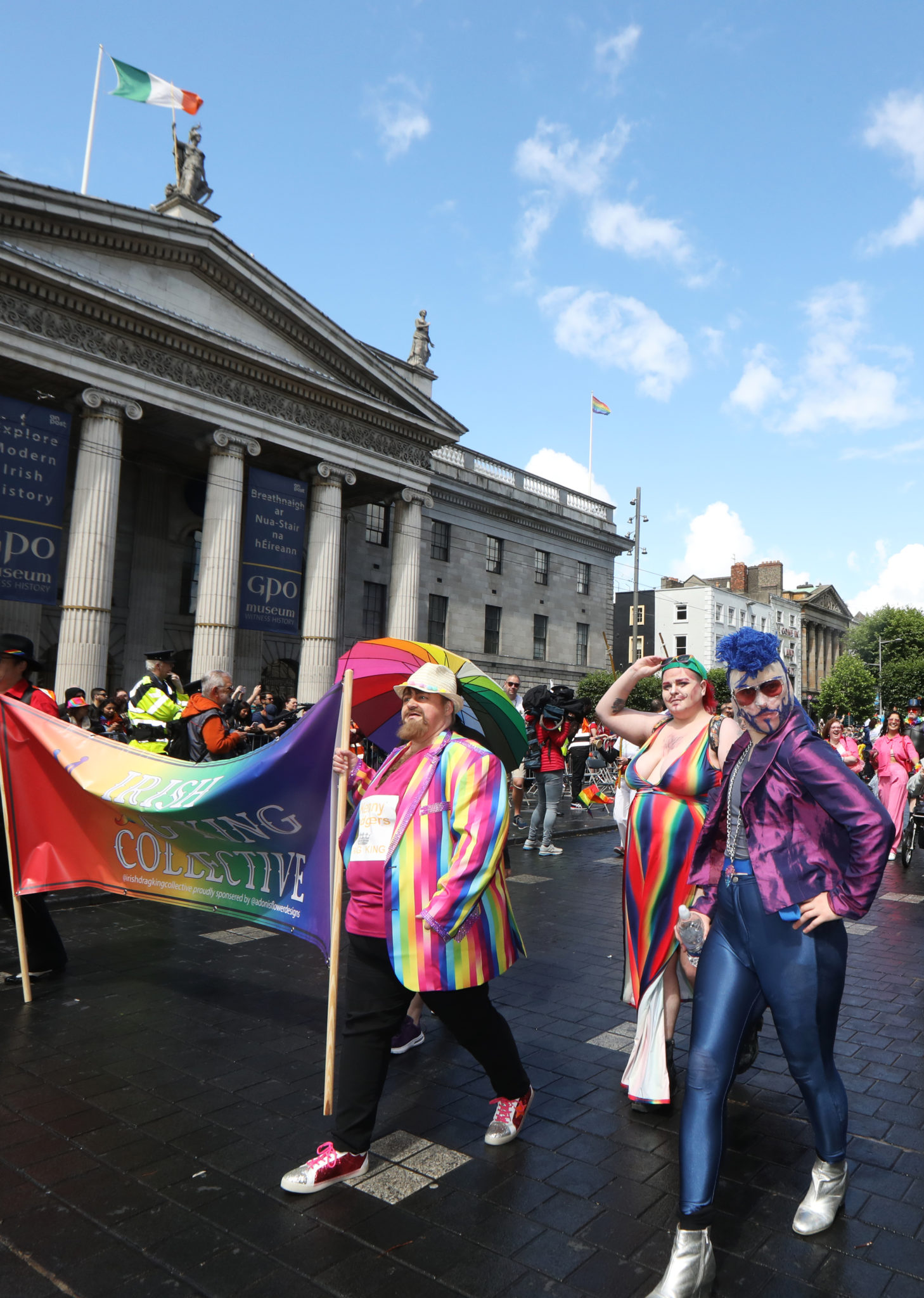 25/06/2022.Pride Parade.Pictured are people taken part in the parade outside the GPO on O'Connell Street in Dublin today, as crowds gathered for the 2022 Pride Parade. Photograph: Leah Farrell / RollingNews.ie

One noticeable difference between the parades in 2019 and 2022 was the ubiquitous presence of Ukrainian flags being waved alongside the traditional rainbow flag of the LGBT community.

It is a solidarity that the parade’s Ukrainian contingent say is deeply appreciated:

“We really appreciate being included and being invited to the parade,” one Ukrainian, Igor, enthused.

“And we have quite a big community today joining the parade supporting the great cause and supporting the society which has welcomed pride with open arms.”

However, it was not all about smiles and cheering; famously Pride has its roots in protest and for many attendees the day’s events are about more than just having a good time:

“Especially right now when we really feel that trans people are being villainised in the media and we’re really not getting… healthcare and we need to see progress on legislation.

“It’s so important that we’re here, we’re celebrated and we’re here with joy rather than only ever talking about the difficulties.” 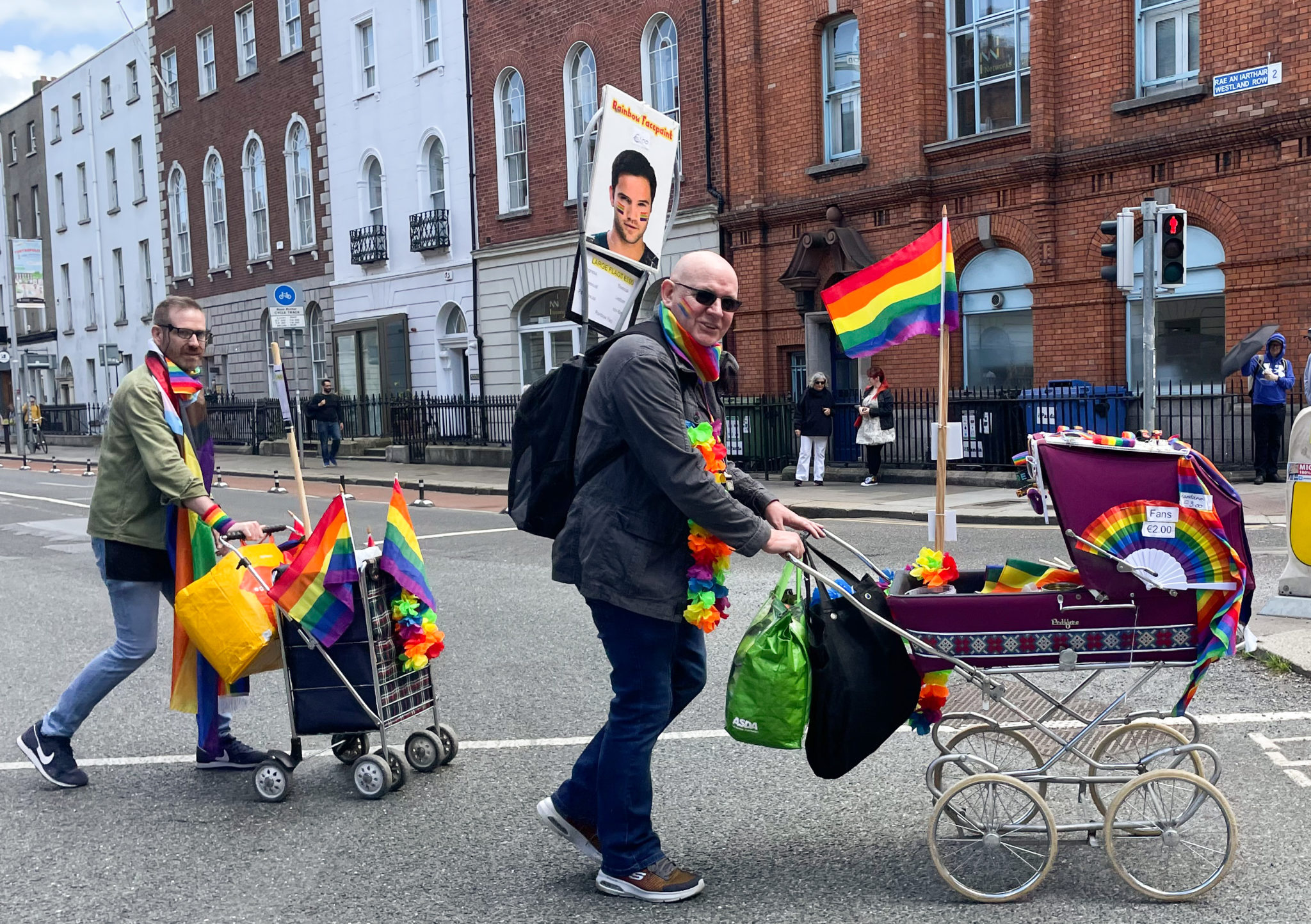 25/06/2022 Street Vendors get in on the Rainbow Phenomenon at Westland Row Dublin today, as they await the arrival of the 2022 Pride Parade. Photograph: Eamonn Farrell / RollingNews.ie

The first Pride parade in Ireland took place in Dublin in 1973 when 10 people marked on the Department of Justice to protest the ban on male homosexuality.

A decade later in 1983, hundreds marched under a cloud of fury and fear after the killers of gay man Declan Flynn were given only suspended sentences. “It could be interpreted as a license to kill,” Senator David Norris said at the time.

The Oireachtas went on to decriminalise gay sex in 1993 and gay marriage by legalised by a popular vote in 2015.

Parenting: 'My 11-year-old daughter has told me that she thinks she is bisexual'