President Michael D Higgins has led tributes to cervical cancer campaigner Vicky Phelan, who has died at the age of 48.

She passed away at Milford Hospice in Limerick in the early hours of Monday morning.

President Higgins said her death would be met with "the deepest sense of sadness".

"All of us who had the privilege of meeting Vicky will have been struck by the powerful inner strength and dignity with which she not only faced her own illness, but with the sense of commitment to the public good and the rights of others with which she campaigned," President Higgins said.

"Vicky, in all of this, made an enormous contribution to Irish society.

"Thanks to her tireless efforts, despite the terrible personal toll she herself had to carry, so many women’s lives have been protected, and will be protected in the future.

"She will be deeply missed, by all of those who were in awe of her courage, her resilience, offered not only to women but to all of us in Ireland.

"She will of course be missed above all by those closest to her. May I express my deepest condolences to Vicky’s parents Gaby and John, her husband Jim, her children Amelia and Darragh, and to all of her family and friends."

"I am deeply saddened at the passing of Vicky Phelan. On behalf of the Government of Ireland, I extend my deepest sympathies to her husband Jim, children Amelia and Darragh, family and friends," Mr Martin said.

"Vicky was a woman of extraordinary courage, integrity, warmth and generosity of spirit.

"She made a very significant contribution to public life in Ireland and Vicky’s actions and commitment will live long in the memory of the entire nation.

"Vicky ensured the embedding of the principle of full public disclosure in the area of public health. 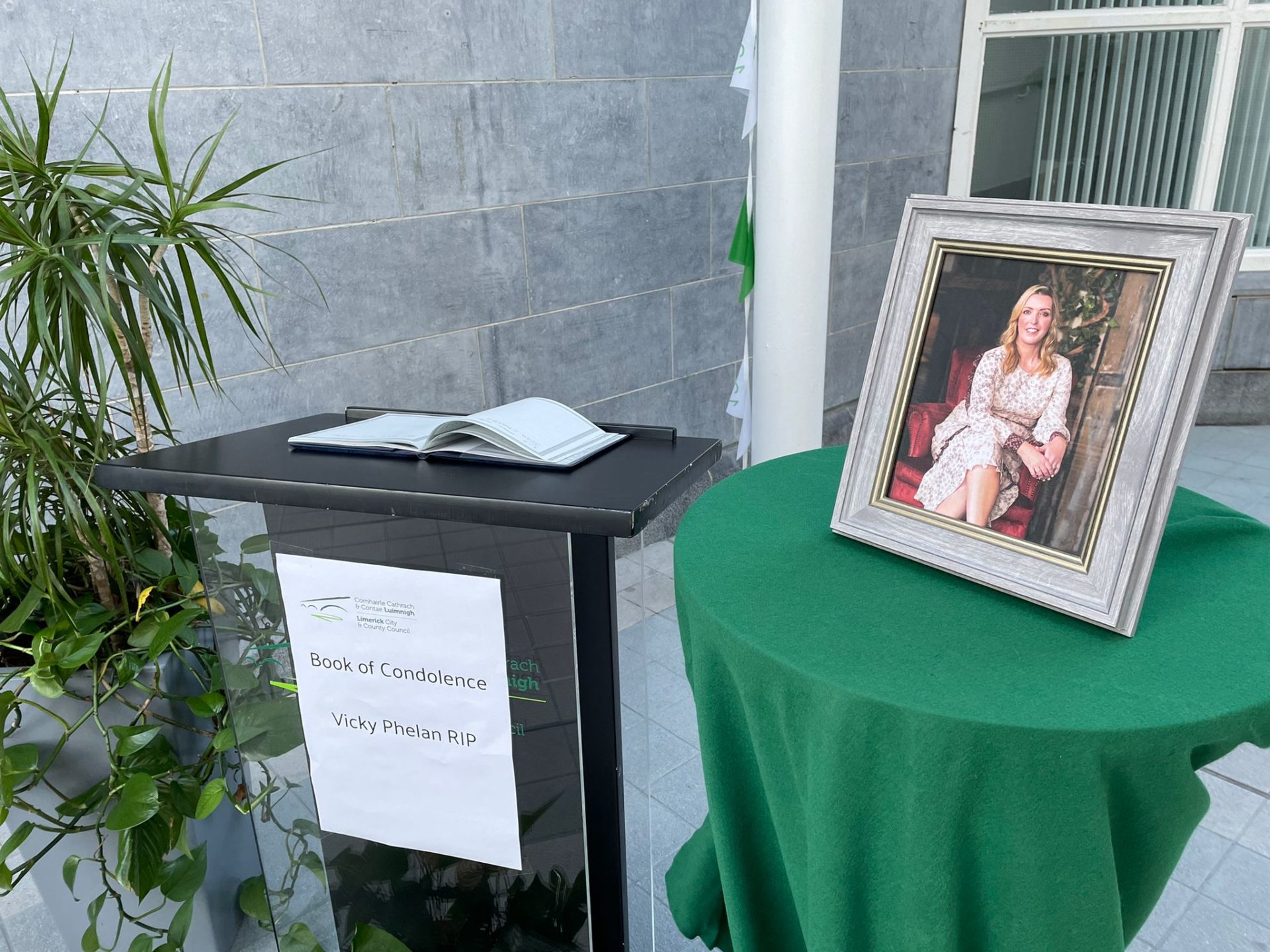 A book of condolence for Vicky Phelan in Co Limerick. Picture by: Josh Crosbie/Newstalk

"Vicky stood up for the public interest, particularly in relation to the CervicalCheck scandal.

"She was an outstanding advocate for women across this country, and across the globe.

"Vicky always gave selflessly of her time to help others, even though she was going through severe illness herself.

"The people of Ireland have a deep affection for Vicky, and will always hold her contribution to public life in the highest regard."

"Today Ireland has lost a woman of limitless courage, compassion and strength," he said.

"I want to extend my deepest sympathies to Vicky’s family, particularly to her children on the loss of their incredible mother.

"Vicky was a shining example of the power of the human spirit. Her fight to uncover the truth and the courage with which she faced her illness made her an inspiration to us all.

"We mourn her as a nation, as a society, and as individuals."

"Today we have heard the very sad news of Vicky Phelan’s passing. I send my deepest condolences and sympathies to Vicky’s family on their loss," Minister Donnelly said.

"Vicky leaves a legacy of enormous and enduring impact which has touched the lives of many people, and in particular women and families affected by cervical cancer.

"My thoughts are with Vicky’s family and many friends on this sad day."

"Today we have lost our biggest big sister. We are shattered.

"She told us this day would come but she fought so hard and so well that we couldn’t let ourselves think it would happen.

"Our hearts go out to Jim, Amelia and Darragh and to Vicky’s Mam and Dad, her sisters and brothers and her extended family.

"Our pain is suffocating just now but it is nothing compared to their loss.

Vicky raised her voice in 2018 because she wanted those in power, those with responsibility to learn from their mistakes. In her own words, two years ago, she said:

"Let those words be her legacy. Cervical screening saves lives.

"It failed Vicky in life. In her memory those with responsibility must ensure that it never fails others."

"Today it is no small understatement to say we are poorer for the loss of Vicky Phelan, but truly richer as a nation for the contribution she so generously made to Irish life," Ms Power said.

"Vicky refused to be silent in the face of great personal challenge and the issues she brought to light changed the course of history for women in Ireland. Without her courage and her determination, others would not have known the truth behind the Cervical Check failings.

"Despite her own experience Vicky was a staunch champion of screening and tirelessly encouraged others to take up the offer when it was their turn.

"Unselfishly – and true to her trademark sense of fairness and conviction – it is the promotion of screening that is such an important part of Vicky’s legacy, which will go on to save many lives."

We are devastated today to have lost our beacon of light for those affected by cancer in Ireland. Our thoughts today are with Amelia, Darragh, Jim, her parents John and Gaby and all Vicky's family and friends. Ar dheis Dé go raibh a hanam.💛 pic.twitter.com/w6ms5EItLs

"Cervical cancer robbed her of her future and left her coping with severe side effects during her final years. Because of her advocacy, others will never have to go through what she went through.

"On top of her national advocacy, which will leave a lasting impression on Ireland as a country, Vicky was so generous with her time and energy to support others affected by cancer.

"She spoke candidly about her own experience, including the physical and sexual side effects of her cancer and treatment, which was a catalyst for better conversations and supports for women facing similar situations.

"In response, the Irish Cancer Society piloted the Women’s Health Initiative, to help women cope with a wide array of symptoms caused by their cancer treatment – including sexual problems, infertility and premature menopause.

"This ground-breaking programme for women was inspired by Vicky’s openness about the implications of her own cancer treatment, which also helped other women to break their silence regarding their own challenges.

"Most of all we will remember Vicky’s good humour, her empathy, her kind-hearted nature and her openness that contributed so much to Irish life and to the cancer community in recent years.

"We owe her a debt of gratitude that we must work tirelessly to repay by ensuring that women’s health is prioritised and promoted. Vicky’s legacy demands nothing less.

"Our thoughts today are with her children, Amelia and Darragh, husband Jim and all her family and friends," Ms Power added.

The Hard Shoulder host Kieran Cuddihy paid his own tribute to her.

So sad to hear of the death of Vicky Phelan 💔

After refusing to sign a confidentiality agreement, she was the one who lifted the lid on the CervicalCheck controversy from the steps of the High Court in 2018.

She touched so many lives and her bravery undoubtedly saved many too. pic.twitter.com/3AVyi4kUMS

Our good friend Vicky Phelan has died in the early hours of this morning at Milford Hospice in Limerick.

Our deepest sympathies to Vicky's family and friends, may she rest in peace. pic.twitter.com/X5LcvbbiVI

Vicky Phelan made our country a better place. Everyone who came into contact with her was the better for it. Her advocacy & determination brought about change. Her kindness & decency brightened lives.

The most incredible advocate I’ve ever met. Thinking of her family & friends

Main image: Vicky Phelan is pictured at Aras an Uachtaráin. Picture via @PresidentIRL on Twitter