A female comedian was heckled and two other women were forced to leave a bar after they confronted Harvey Weinstein at an event for young performers in New York.

The movie producer, who is on bail after being arrested on sexual abuse charges including rape, has only appeared in public a few times in recent months.

Dozens of women have accused Weinstein of abuse, but he denies all allegations of non-consensual sex.

He turned up with an entourage of men and women at the Downtime bar in Manhattan to watch Actor's Hour, which is described as a "pop-up speakeasy... designed for artists to indulge in the joy of performance".

Comic Kelly Bachman was among those to call him out and shared a video on Instagram of herself on stage at the show where she said she had to address "the elephant in the room" during her set. 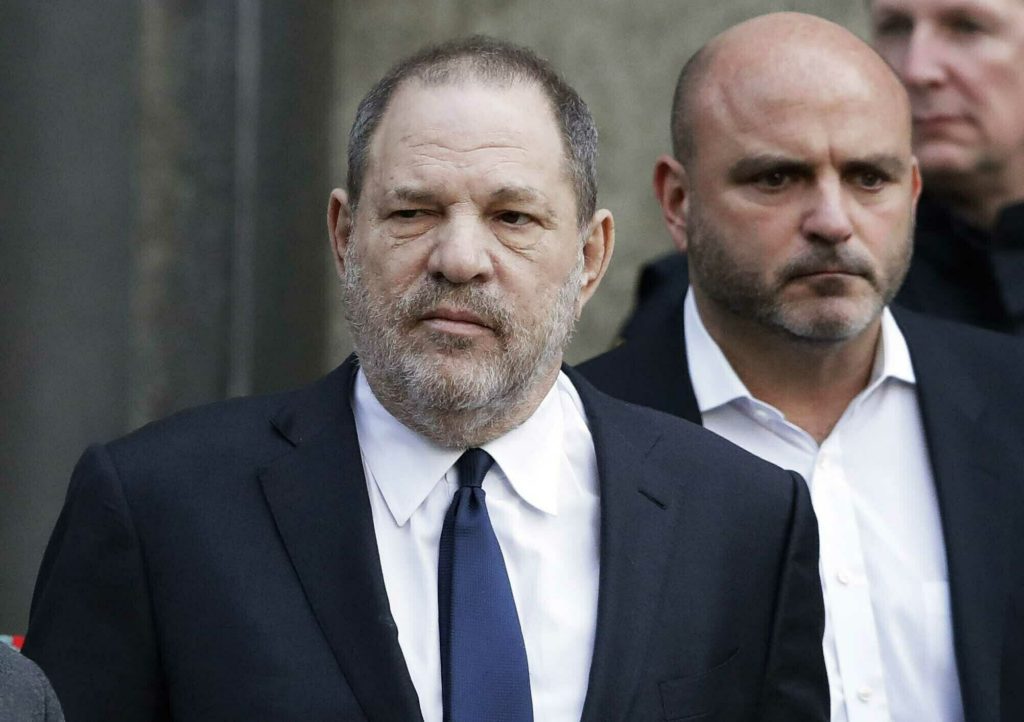 "I'm feeling a little tense. Anybody else?" Bachman can he heard saying in the clip.

"I'm a comic. And it's our job to name the elephant in the room.

"Do we know what that is? Yeah it's Freddy Krueger in the room, if you will.

"I didn't know that we had to bring our own mace and rape whistles to Actors' Hour."

She was booed by some members of the audience, and one person shouted "shut up", to which Bachman responded: "This kills at group therapy for rape survivors. They love it."

Bachman was not the only one to confront Weinstein.

Hey all, I know I’m late to the conversation here. I don’t usually use twitter but it seems like that’s where a lot of this conversation is happening. Last night I confronted Harvey Weinstein in a bar along with a number of other artists. Heres the thread (1/?) #HarveyWeinstein pic.twitter.com/L8Oee5hAO7

"Nobody's going to say anything?" she shouted.

"Nobody's really gonna say anything?" she repeated, pointing at the 67-year-old.

"I'll get out of here. That's fine. I'm happy to leave. But nobody's gonna say anything?

"I'm gonna stand four feet from a f****** rapist and nobody's gonna say anything?" she continued, before she was ushered away.

Bachman's friend and fellow comedian Amber Rollo tweeted: "I cursed out Harvey Weinstein tonight and his goon called me a c***."

She later added she was not only "shocked" to see him out, but also "supported" at the event.

"Some people didn't realise what was going on, some artists knew and were scared and some were outright supporting this f****** serial rapist monster," she wrote.

"Let me explain that one more time, an event that was supposed to support actors and artists invited a serial rapist who has ruined at least 87 actors' lives and supported that monster over an actor in the room. They supported HIM over all the actors in the room."

Downtime Bar NYC addressed the incident on its Facebook page: "A company called Actors Hour rented our bar for a private event, with a guest list all their own.

"Shortly into the evening, one guest began heckling another, causing a disturbance to everyone in attendance. After several requests to stop were ignored, we kindly asked the heckler to leave.

"Please know that our goal at Downtime is to create an environment where everyone feels welcome.

"We respect the privacy of our patrons and event partners, and want to ensure that all guests are treated equally, with the same service and respect. In keeping with this goal, we made a decision that would allow the evening to continue as planned."

Weinstein's representatives confirmed to NBC News that he was in the audience at the event.

"Harvey Weinstein was out with friends enjoying the music and trying to find some solace in his life that has been turned upside down," a spokesman for him told the broadcaster.

"This scene was uncalled for, downright rude and an example of how due process today is being squashed by the public, trying to take it away in the courtroom too."

On Wednesday, actress Rose McGowan launched court action against the Hollywood producer, two of his former lawyers and a private intelligence agency, accusing them of trying to silence her and derail her career before she accused Weinstein of rape.