Dublin's Portland Row has been celebrating this morning after Kellie Harrington took gold in Toky...

Dublin's Portland Row has been celebrating this morning after Kellie Harrington took gold in Tokyo.

The judges gave the first round to the Brazilian boxer, 3-2. 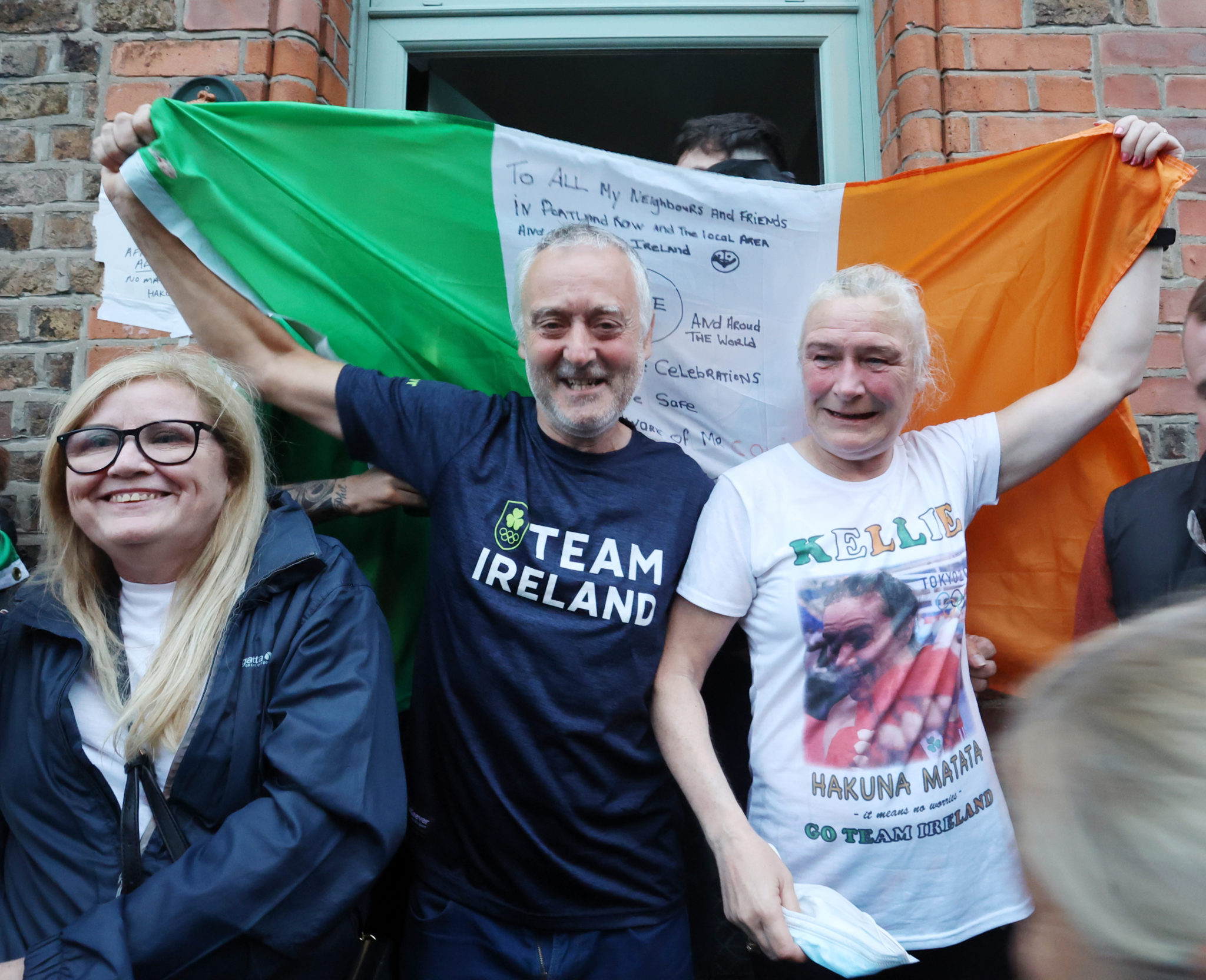 Kellie Harrington's parents, Christy and Yvonne, celebrate with friends and family outside their home on Portland Row in Dublin. Picture by: Sam Boal / RollingNews.ie

However, Kellie managed to win the backing of all five judges in round two - and stayed calm to secure the win in the final round.

She has made history by becoming only the third Irish boxer to win an Olympic gold medal.

Speaking after the fight, Harrington says: "Relieved, totally relieved. I'm just glad that it's over.

"To have the support of a nation backing you is just, it's actually hard to believe, I actually feel the nation has been behind me.

"Regardless of whatever happened out there today - whether I got a silver or a gold - I knew, and I know, that I have made them proud." 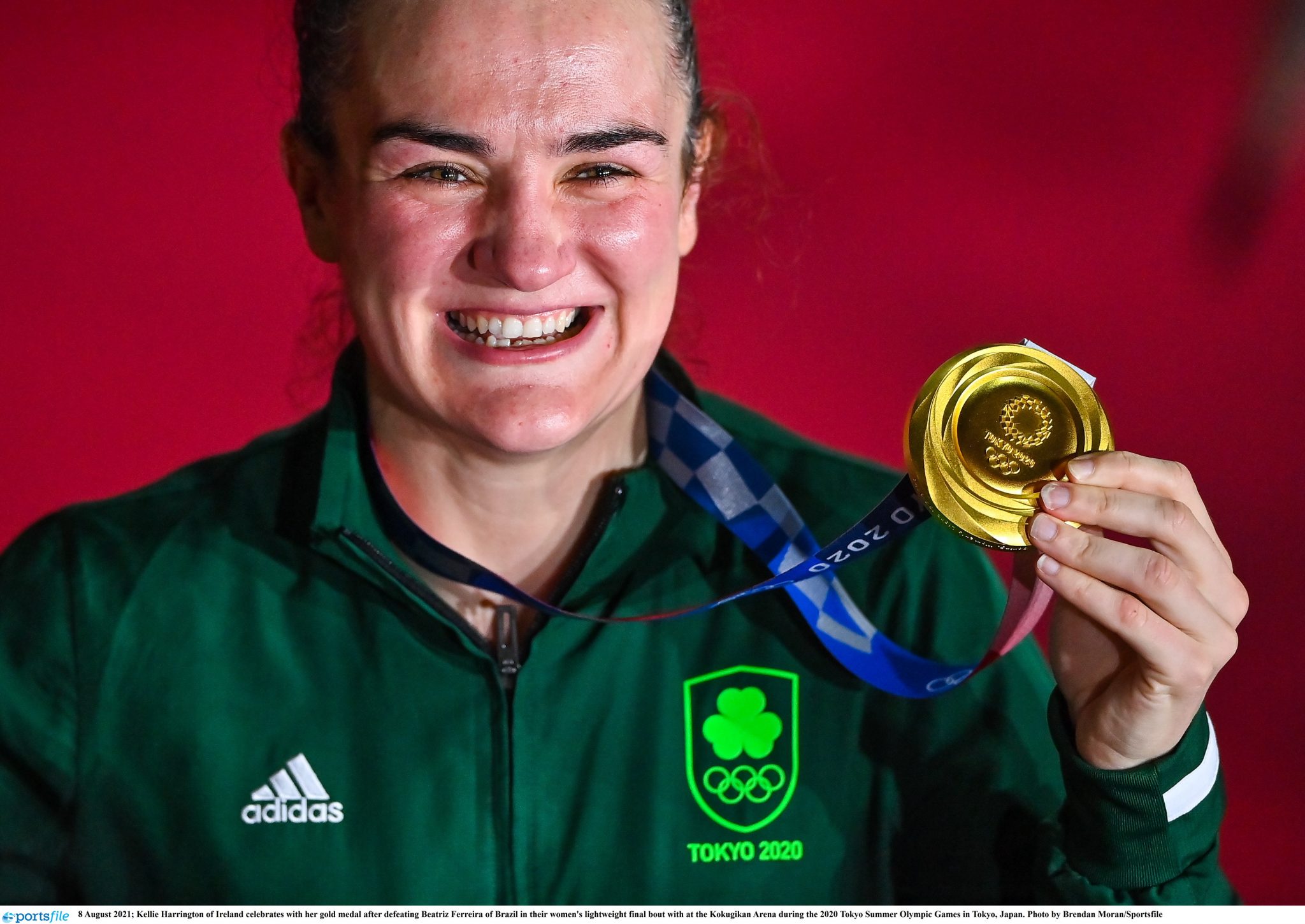 Kellie Harrington celebrates with her gold medal, after defeating Beatriz Ferreira of Brazil in their women's lightweight final bout at the Kokugikan Arena during the 2020 Tokyo Summer Olympic Games in Tokyo, Japan. Picture by: Brendan Moran/Sportsfile

Harrington says she was nervous, but in control.

"You are nervous for every single fight, it doesn’t matter what fight it is.

"But nerves are great, they make you feel alive - they give you energy, they keep you on edge.

"As long as I can control them and not let them eat me up then I'm fine.

Residents on Portland Row in the north inner-city, where Kellie is from, gathered to watch the fight on a big screen.

This is what it means to Portland Row 🙌🏼 #Olympics @offtheball pic.twitter.com/yGEsE6pSgI

Local councillor Anthony Flynn was there and says the celebrations are continuing.

"From Portland Row to Tokyo this morning - the inner-city actually done Kellie proud in terms of what happened here this morning.

"But more importantly Kellie's done not only the inner-city of Dublin proud, but she's done the whole of Ireland proud.

"It's absolutely fantastic this morning to see that she's taking a gold home.

"The atmosphere in the inner-city this morning is absolutely electric, and the comments that are coming in right across the country in support of Kellie are absolutely unbelievable.

He says there's been a massive turnout with "young and old out to see Kellie on that big screen at Portland Row this morning.

"It's still going on there at the moment, and I'd say the celebrations are going to continue late on into the day".

He says plans are still being worked out for her homecoming.

It's 5am and Portland Row has massive speakers playing Hakuna Matata 😂

Portland Row is having a party! Went down for a drive by beeping, loads of others have the same idea 🙌🏻🙌🏻 #KellieHarrington pic.twitter.com/4Oi6JFHofT

Tributes have also been flooding in for the 31-year-old.

“My warmest congratulations to Kellie Harrington on winning her gold medal at the Olympic Games. Hers is an exceptional achievement, and she is an inspiration for us all.” #Tokyo2020 @sportireland @TeamIreland

Congratulations #kellieharrington on winning gold for Ireland in an epic Olympic final. Brilliant fight. Your family community and country overjoyed for you.

True courage , brilliance and humility @Kelly64kg has all the qualities of a true Olympic champion. She represents everything great about being Irish, an Inner City Dub and a class young Woman. Bravo Legend #kellieharrington #Olympics 🇮🇪 pic.twitter.com/rxUvuLuEq9