The European Commission President Ursula von der Leyen has thanked Ireland for its part in the Br...

The European Commission President Ursula von der Leyen has thanked Ireland for its part in the Brexit process.

She was speaking with Taoiseach Leo Varadkar on her first official visit to Ireland on Wednesday.

She met Mr Varadkar on the steps of Government Buildings in Dublin, before they held a joint press conference.

Mr Varadkar is then hosting a dinner for Ms von der Leyen.

The next stage of the Brexit negotiations is set to be high on the agenda.

Ms von der Leyen said Ireland has been crucial to the entire process.

"The European Union has negotiated respectfully, fairly because we wanted an orderly exit... [it] was very important for us to protect citizens' rights".

"And of course one of the top priorities was to ensure peace and stability on the island".

"It would not have been possible to reach this agreement without the very hard work, the patience, and the unity of everybody here in Ireland."

"And therefore Leo, thank you". 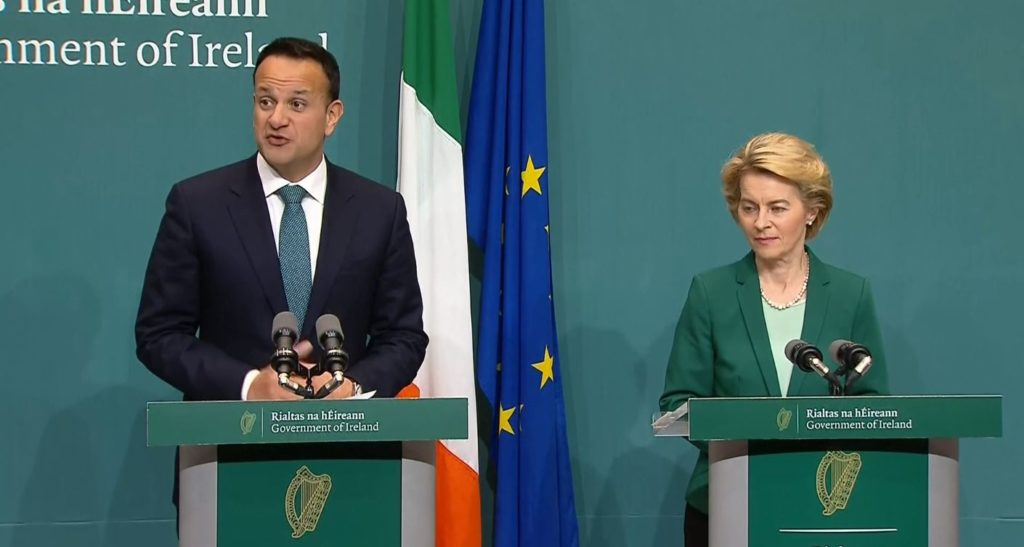 "It's either all four have a free movement or none of this is possible", she said.

Mr Varadkar also said Ireland would be "absolutely on Team EU" in the next phase of trade agreement talks between the bloc and the UK.

"I want to assure President von der Leyen that Ireland, not withstanding our unique relationship with the United Kingdom, will be absolutely on Team EU - part of the 27 in these negotiations - just as the 27 were so much on our side in the first phase of these talks".

He added: "Getting that agreement is crucial for businesses, for jobs, for exporters and also for the agric-food sector as well.

"Whatever problems we face at the moment in our beef industry, they'll be much, much worse if our beef farmers and our meat industry doesn't have access to that British market in 2021".

Climate change and the European Green Deal were also due to be discussed, Mr Varadkar added.

May: Britain needs a further extension to Brexit