The UK Prime Minister has broken down into tears as she announced a date for her departure as lea...

The UK Prime Minister has broken down into tears as she announced a date for her departure as leader of the Conservative Party.

Theresa May will step down as leader on Friday June 7th.

She said she will continue to serve as UK Prime Minister until a successor is chosen.

“I will shortly leave the job that it has been the honour of my life to hold,” she said. “The second female prime minister but certainly not the last.”

“I do so with no ill will but with enormous and enduring gratitude to have had the opportunity to serve the country I love.”

She began her speech by addressing the ongoing UK Parliamentary turmoil over Brexit – noting that it “will always remain a matter of deep regret” that she was unable to deliver it during her time in office.

“I feel as certain today as I did three years ago that, in a democracy, if you give people a choice you have a duty to implement what they decide,” she said.

“I negotiated the terms of our exit and a new relationship with our closest neighbours that protects jobs, our security and our union.

“I have done everything I can to convince MPs to back that deal.

“Sadly I have not been able to do so. I tried three times.

"I believe it was right to persevere – even when the odds against success seemed high. But it is now clear to me that it is in the best interests of the country for a new prime minister to lead that effort.”

She said the process to elect a new leader would begin in the week after her departure and said she intends to continue as Prime Minister until the leadership contest is concluded. 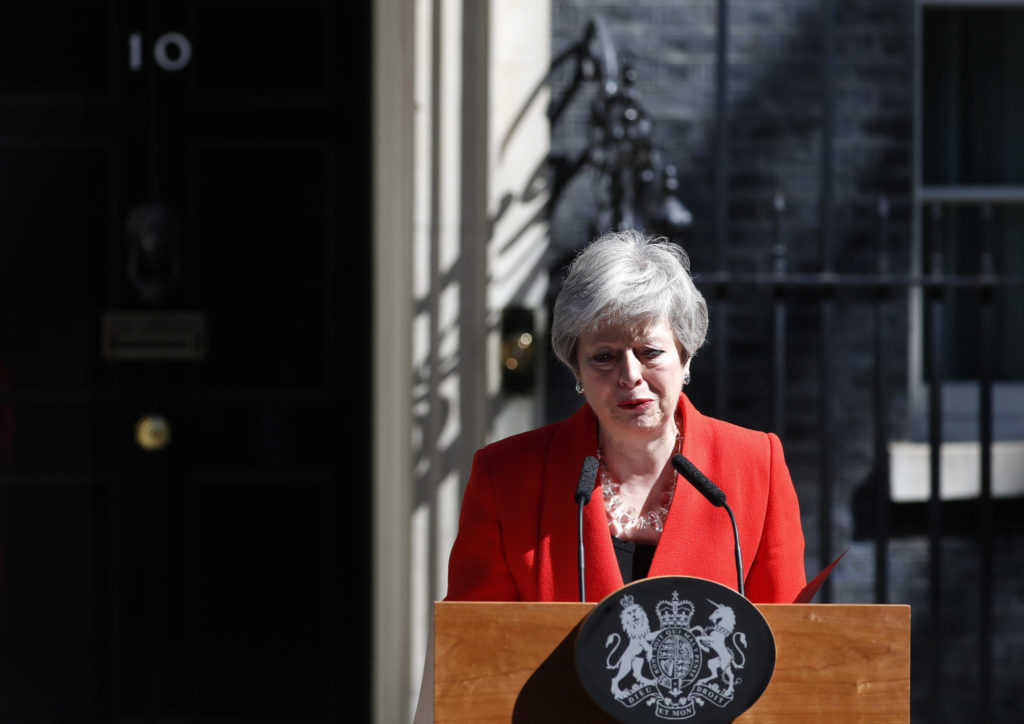 Meanwhile, a number of Conservative politicians have already expressed their intention to enter the leadership contest.

Britain's foreign secretary Jeremy Hunt is the first cabinet minister into the ring, saying he'll join the race to replace her.

Speaking to a packed house in Haslemere Festival today: An historic day with the announcement of the PM’s resignation. Proud to pay tribute to her for the remarkable service she has shown our country. Now we need to put aside Brexit differences and unite party and country pic.twitter.com/KhDf2FHDNd

Other names already in play are Boris Johnson, Esther McVey and Rory Stewart, with the pack expected to expand over the coming days.

The chairman of the backbench 1922 committee - Graham Brady - has also stepped down from that role, saying he's considering running for party leader.

Mr Johnson is considered an early frontrunner, although it's widely expected other prominent pro-Brexit figures such as Michael Gove will also join the race.

Nominations can be made until June 10th, and Conservative parliamentarians will then whittle the list down to two nominees.

All members of the party will then be able to vote on the winner, following hustings around the UK.

In a statement after the announcement, the Taoiseach Leo Varadkar said she had worked to “chart a new future for the United Kingdom.”

“I got to know Theresa May very well over the last two years,” he said.

“She is principled, honourable, and deeply passionate about doing her best for her country and her party.

“Politicians throughout the EU have admired her tenacity, her courage and her determination during what has been a difficult and challenging time.

“Theresa May strove to chart a new future for the United Kingdom. I want to wish her the very best for the future.

He said he looks forward to working with her successor at 10 Downing Street.

He warned however that the change in the British political landscape could be bad news for Ireland.

“In the next couple of months we may see the election of a Eurosceptic prime minister who wants to repudiate the withdrawal agreement and go for no deal or we may even see a new British Government that wants a closer relationship with the EU and goes for a second referendum,” he said.

“But whatever happens, we are going to hold our nerve, we are going to continue to build and strengthen and deepen our alliances across the European Union and we will make sure that we see Ireland through this.”