The European Commission President has said Europe needs to take on some of Ireland's 'stubbornness.'

Ursula von der Leyen praised Ireland during her address to the Joint Houses of the Oireachtas on her visit to Dublin on Thursday afternoon.

Earlier, she met with the Taoiseach Micheál Martin and President Michael D Higgins.

Thank you for the great cooperation over the past 2.5 years - quite eventful years, too.

In difficult times, you always remained true to our European values.

"This country knows what it means to struggle for the right to exist," she said.

"Today, another European nation is fighting for independence.

"Of course, Ireland is far away from the front line in Ukraine - but you understand better than most why this war matters so much to all of us.

"Just like our friends in Eastern Europe, you know that in Ukraine there is more at stake than the future of one country alone.

"Ukraine is fighting for freedom itself; for self-rule; for the rules-based global order." 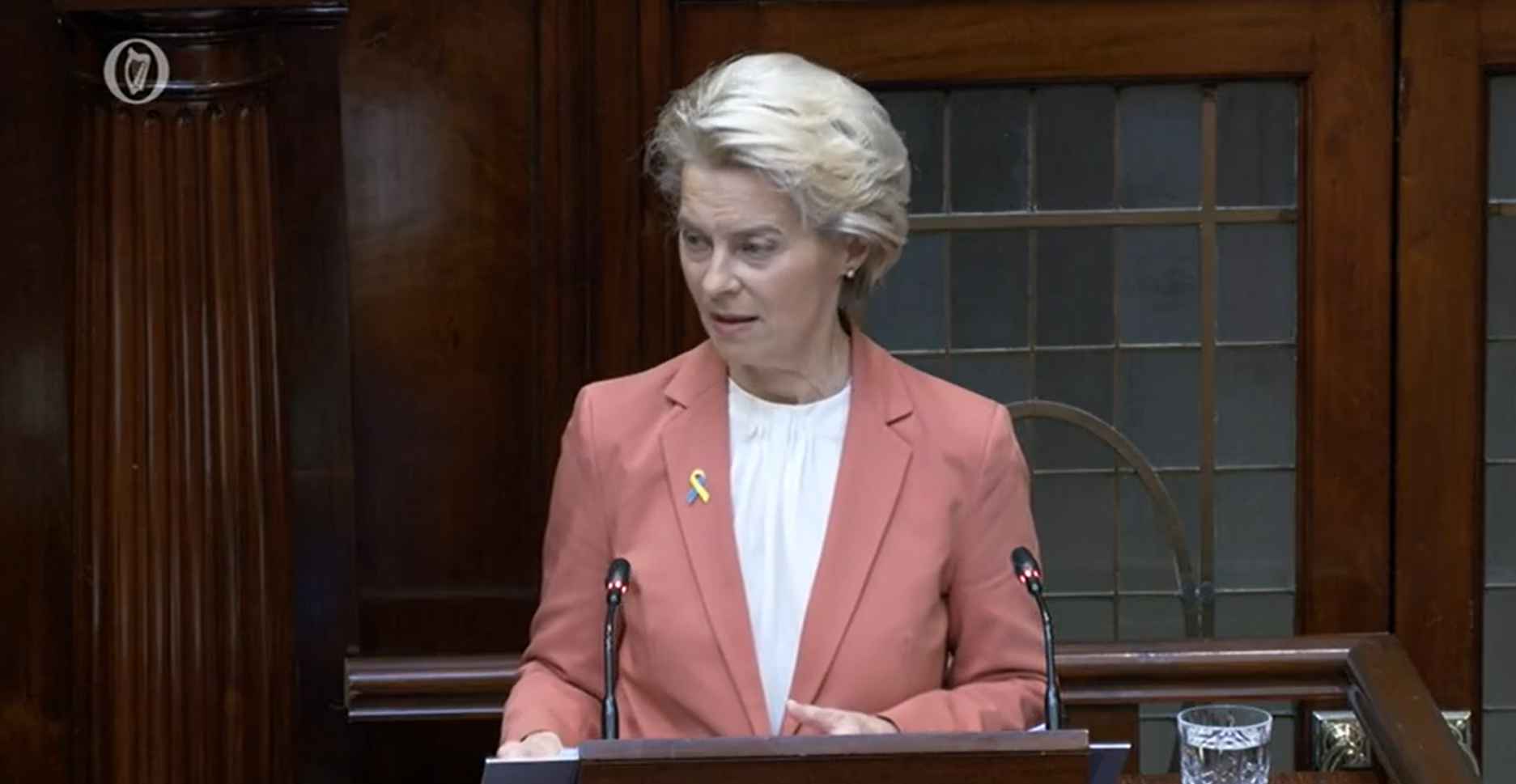 She said Ireland has "gone above and beyond in its support to Ukrainians."

"Our support to Ukraine must continue, for as long as it takes until Ukrainians fully recover what Russia has tried to take from them. Their freedom. A saoirse," she said.

President von der Leyen said the rest of Europe should learn from Ireland.

"This leads me to my second point. Europe should learn the Irish resolve - or some may say, the Irish stubbornness.

"History has never been easy on Ireland, but you have never surrendered your soul – and whenever history hit you, you fought back.

"A country of emigrants has turned into a magnet for global talents.

"Ireland has constantly transformed its economy to make it one of the most successful in Europe - but now, a new crisis is hitting Europe.

"The fallout of the war in Ukraine is weighing on households and businesses across the EU.

"The whole of Europe needs your stubbornness today to keep supporting Ukraine for as long as necessary, and to break free from our dependency on Russian fossil fuels," she added.

On Brexit, she said this will "not become an obstacle on the path of reconciliation in Ireland."

"I can promise you that whenever the European Union sits down with our British friends, we will do so with ‘an honest heart, and an open mind', to quote the great Irish band The Saw Doctors.

"By applying common sense and focusing on the issues that really matter in Northern Ireland, I believe we can make progress in resolving the practical matters surrounding the Protocol."

'A beacon for Europe'

Praising movement on the rights of women and the marriage equality referendum, she said Ireland has become "a beacon for Europe and the world."

She said Ireland's most important contribution is our optimism.

"The Irish people have built your own good fortune, through thick and thin," she said.

"Jack Lynch was an optimist, when he said that you could make Ireland and the EU a better place.

"The heroes of the Easter Rising, and the architects of the Good Friday Agreements were optimists, because they believed that they could change the course of history.

"That is their greatest lesson for us," she added.

Loyal to your history and traditions.

Open to the future and the world.

In 50 years of 🇪🇺 membership, Ireland has made Europe a better place. https://t.co/cB9Bk1MMDH