The Government's 'stay and spend' scheme has been labelled a "complete flop", as new figures reveal a low level of uptake for the scheme.

Under the scheme, people were able to claim a certain amount of tax back on holiday accommodation, eat-in food and non-alcoholic drink between October 1st last year and April 30th of this year.

They had to spend at least €25 on each transaction and could submit receipts of up to €625 for a single person.

Finance Minister Paschal Donohoe initially estimated the scheme would cost about €270 million - but that was before months of tough restrictions and lockdown.

Latest figures from Revenue - released to Newstalk under Freedom of Information legislation - show just under 10,900 claims had been processed by May 10th, about ten days after the scheme closed. 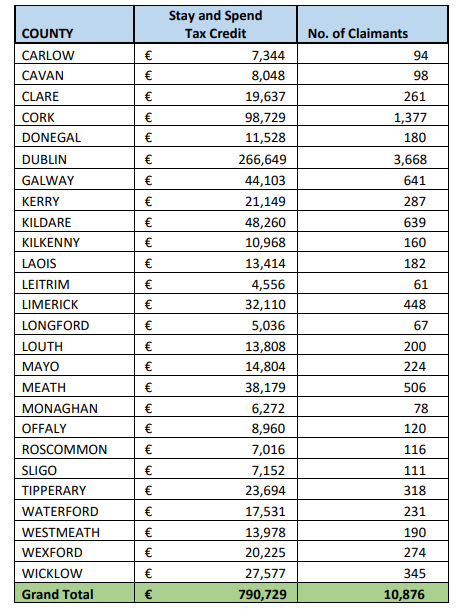 The Government doesn’t think a similar scheme will be necessary this year because of the amount of pent-up demand for tourism and hospitality.

Speaking on Lunchtime Live, Eoghan O’Mara Walsh - CEO of the Irish Tourism Industry Confederation - said the scheme was launched by the Government to "great fanfare".

He said: "It was supposed to be a great stimulus to benefit the public, but also crucially to help the tourism industry. But it’s been a complete flop.

"We know that obviously because there’s been no business through the doors… albeit we’ve been closed for a huge chunk of the time. But it was always poorly designed.

"It was a complicated tax rebate scheme… you had to pay upfront, and claim it back through your tax credits via the Revenue Commission. You had to be employed, so didn’t apply to lots of people.”

He also noted the scheme didn't apply to key areas of the tourism industry, such as guided tours and visitor attractions.

Mr O'Mara Walsh says he does want to see the scheme relaunched and redesigned, but as something more "user-friendly".

He warned that many areas of the country won’t be as busy as others this summer, while there also won’t be the usual level of international tourism needed to support the sector.

He observed: “We do need to lengthen and stretch the domestic tourism season… and I think a new staycation scheme for the autumn is badly needed.”

Richie Sadlier: 'Finger-wagging approach' isn't the way to talk to teenagers about consent