Samantha Power: US 'showing none of the leadership' needed during COVID-19 crisis

Samantha Power, the former US ambassador to the UN, says she believes the Trump administration fa...

Samantha Power: US 'showing none of the leadership' needed during COVID-19 crisis

Samantha Power, the former US ambassador to the UN, says she believes the Trump administration failed to take the necessary steps in February to prepare for the impact of the coronavirus.

While the Trump administration has faced criticism for its handling of the pandemic - including from the likes of New York Governor Andrew Cuomo - Donald Trump has used daily White House press briefings to defend his approach.

Overnight, the US President said he is to "temporarily suspend immigration" into the country due to the coronavirus pandemic

Speaking on The Pat Kenny Show, Ms Power suggested Mr Trump acts "even more rashly and unreliably" when he's "cornered" by a crisis or events.

She observed: “The only algorithms with which you can predict his behaviour are ‘did Barack Obama do it? Therefore I want to do the opposite’ or ‘will it help me politically?’

“What’s so maddening here is that the answer to the second question is not altogether obvious.

“Initially he thought downplaying it… a tonne of wishful thinking… at a certain point he thought ‘I have to get this out of the country before the election’.

“He sort of anchored the public on [a forecast of] 1.2 million deaths… so if it’s far fewer than that he can claim success." 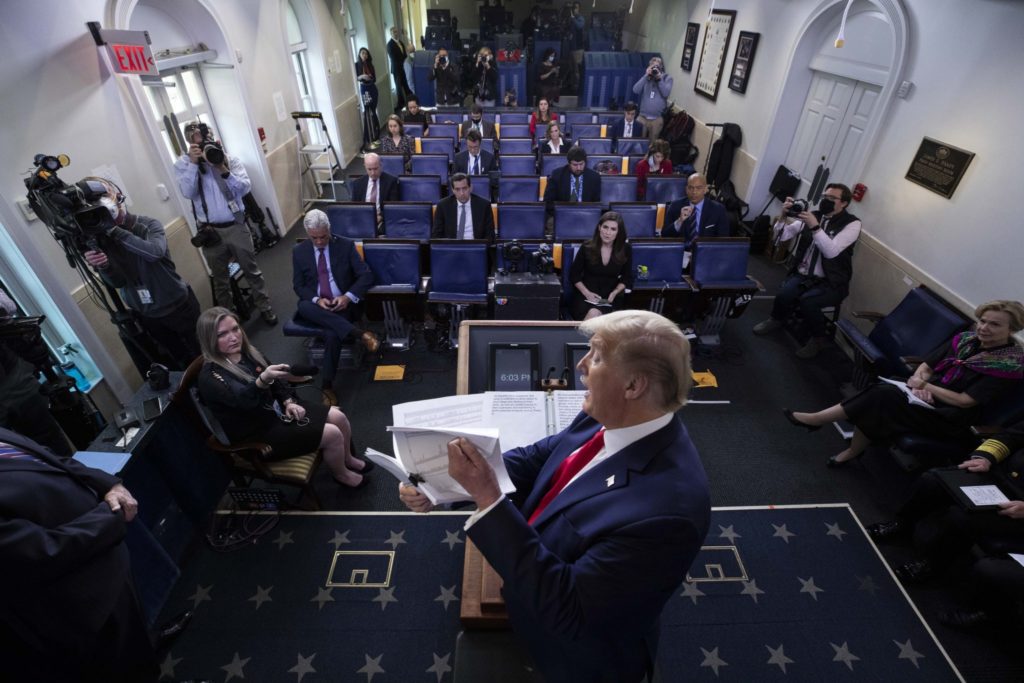 President Donald Trump flips through a stack of papers as he speaks about the coronavirus in the James Brady Press Briefing Room of the White House, Monday, April 20, 2020, in Washington. (AP Photo/Alex Brandon)

She argued: “We’re showing none of the leadership we need to be taking when it comes to how this pandemic hits elsewhere.

"It’s not just through the WHO dimension… it’s also just not using our diplomats, our aid workers, our contacts out in the world.

“[Trump] might want to live in the 18th century and cut off all flights and have America be an island… but that’s not going to happen.

"The economy isn’t going to disentangle itself in the manner in which he might wish, and as a result we have an interest in supporting those parts of the world that don’t have the means to put in place the kind of preventative measures that are necessary now."

She also argued that the US media "echo chamber" makes it very challenging to discipline the US President's decision-making.

She suggested: "If you were a Trump follower you wouldn’t even know quite whether you were meant to be in lockdown or not."

Ms Power said it's been "heartbreaking" to see the number of deaths so far, with more than 40,000 coronavirus-related deaths in the US to date.

She said: "If you look back at the month of February, where none of the steps were taken to put in place the masks, the gloves, the ventilators, the tests that were needed to prophylactically wipe this thing out and prevent it spreading to the degree it has.

“Almost nothing we do now can catch up with the virus sufficiently.

“The odds of the economy coming back to normal any time soon are quite slim… so when Trump feels cornered - as he might, when people present the economic data looking months out - that’s when he starts to act even more rashly and unreliably."

She observed: “That meant undoing the Iran deal with no plan for doing it properly… it means now tearing into every day the alleged Obama stockpiles, when it would have been hard for Obama to have stockpiles of tests for a virus and pandemic which didn’t exist yet.

“He wants to be the best and knock down and tear down anyone who might challenge him, psychologically even.

“I think he’s small in his soul, for lack of a better expression."