10,000 without power, weather alerts in place as Storm Hannah hits

Some 10,000 homes, farms and businesses are without power across the country due to Storm Hannah....

10,000 without power, weather alerts in place as Storm Hannah hits

Some 10,000 homes, farms and businesses are without power across the country due to Storm Hannah.

The ESB has said the outages are mainly in Cork and Kerry, with further power cuts expected throughout the night.

The damage is mainly attributable to trees falling on overhead lines as a result of the high winds, which have been recorded in excess of 130 kph.

Customers can check their area on the ESB Powercheck website.

ESB said it has mobilised and is in the process of dispatching repair crews to affected areas.

Areas most affected include the Iveragh and Dingle peninsulas and areas of west Cork - including Macroom.

Several weather alerts are still in place, with a status Red wind alert in effect for Clare until 11.00pm.

An earlier Red alert for Kerry has been stood down.

In Clare, northwesterly winds will reach mean speeds in excess of 80km/h with "violent gusts" of 130 to 150 km/h for a time this evening.

Status RED - Wind Warning for Clare
Northwesterly winds, associated with Storm Hannah, will reach mean speeds in excess of 80 km/h with violent gusts of 130 to 150 km/h for a time this evening.

People are being urged to stay indoors and not to travel in the Red affected areas.

There are also Orange and Yellow warnings for several other areas.

A status Orange wind warning for Clare, Cork, Kerry and Limerick is in effect until 1.00am on Saturday morning.

A separate status Orange warning is in place for Galway until midnight, and another for Tipperary and Waterford until 2.00am.

Those in the affected areas are tweeting out updates as the storm moves.

It is bringing strong winds to most parts of the country, with counties in the south-west expected to see the strongest winds as the winds move in from the Atlantic. 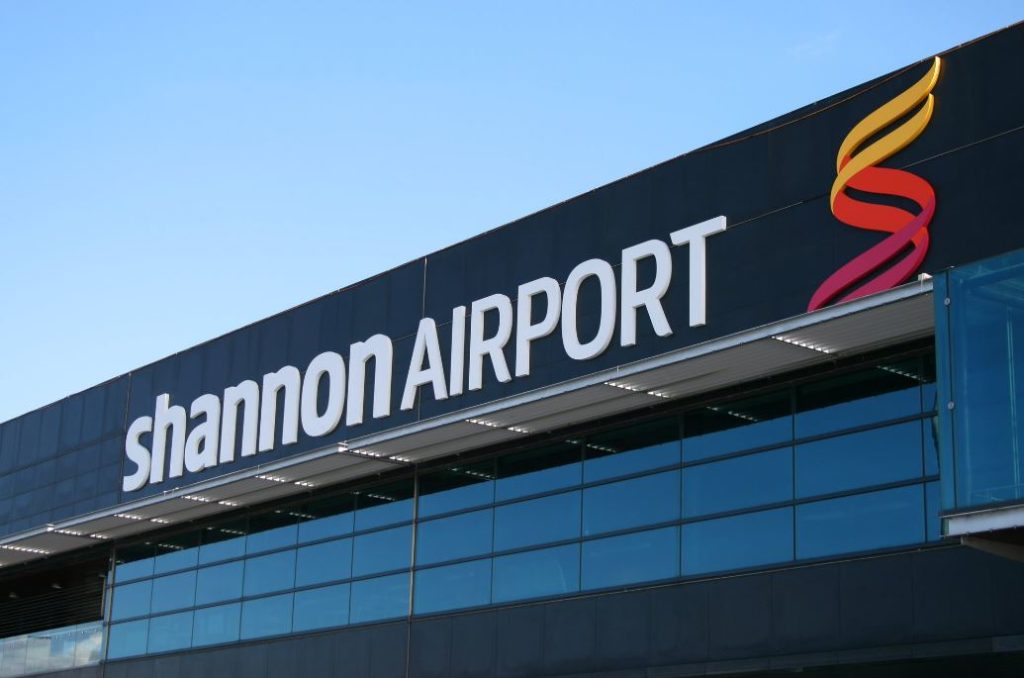 A number of flights at Shannon and Cork Airports have been affected.

Aer Lingus flight EI 386 from Shannon to London's Heathrow Airport was cancelled - as was the returning flight.

Passengers are being urged to contact their airline directly to check their flight status.

While Cork Airport has also advised passengers to contact their airline directly to get up-to-date information.

There have also been cancellations to Bus Éireann services between Limerick and Galway, and on the 343 and 336 routes in Clare.

A number of Irish Rail services in the Orange and Red alert regions will also run at reduced speeds.

Clare County Council is urging people to not travel during the Red warning period, adding that they should not travel overnight unless it is absolutely necessary.

The council said: "Clare County Council is asking members of the public to stay indoors and to avoid all travel from 8pm to 11pm tonight.

"Organisers of events taking place in County Clare this evening are being advised to postpone events in the interests of public safety."

The council's crisis management team is continuing to meet, and cleanup crews will begin any necessary operations after the Red warning has expired.

Meanwhile, the National Directorate for Fire and Emergency Management (NDFEM) has said it is monitoring the situation.

It said coastal flooding is not expected. 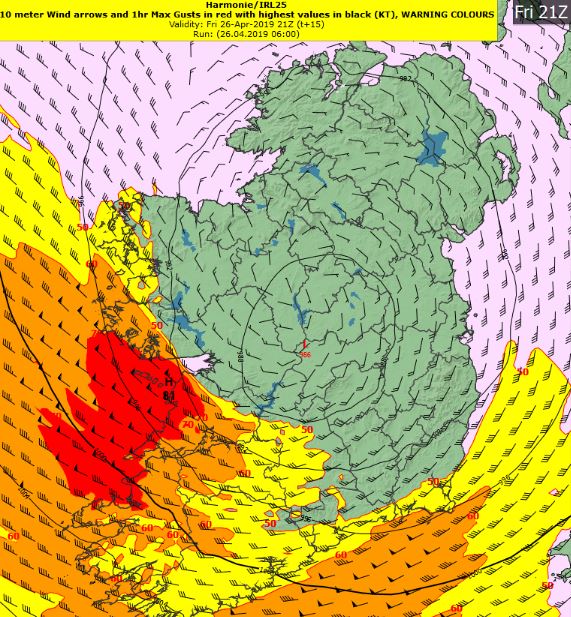 This shows high-resolution surface pressure and wind forecast for 10.00pm on Friday evening - showing the status Red winds in over Co Clare and the north of Kerry and on the Connemara coast | Image: Met Éireann

Officials have been liasing with local authorities, saying the standard emergency response and coordination arrangements as well as public information messaging have been activated.

The NDFEM added: "Appropriate public safety messages are being relayed, especially about staying away from exposed coastal areas during the storm.

"NDFEM have also linked with ESB Networks, which are on standby to respond to any damage to the supply network arising from Storm Hannah.

"We will monitor the storm impacts with the local authorities and make further decisions as judged appropriate."

Gardaí are urging people in the areas affected by the heavy winds to take extra care.

They said in a statement: "Cyclists, motorcyclists and pedestrians should be aware of the danger posed by high winds as they are particularly vulnerable.

"We ask people living near coastal, cliff and waterway areas, particularly those with children, to be extra cautious considering the gusty winds forecast.

Weather warning issued for every county as rain and wind forecast