More Irish citizens have been evacuated from Afghanistan, as the numbers looking to leave the cou...

More Irish citizens have been evacuated from Afghanistan, as the numbers looking to leave the country stand at 35.

The Department of Foreign Affairs says six Irish citizens have now been evacuated.

However it says it is not in a position to disclose specific details of those who have sought assistance.

The Irish embassy in Abu Dhabi is in "ongoing contact" with the European Union and other partners on the ground in Kabul, it adds.

In a statement, the Department of Foreign Affairs explains: "We do not have a diplomatic or consular presence on the ground in Afghanistan.

"However in collaboration with European and other partners, we hope to facilitate further evacuations in the coming days.

"The situation remains fluid and access to the airport remains extremely difficult.

"There are also a small number of Irish citizens who are working for UN and international organisations and currently plan to stay in Afghanistan."

It comes as US President Joe Biden said to Americans, and allies who worked alongside them, "we will get you home".

But he admitted he cannot promise what the "final outcome" of the troop withdrawal will be. 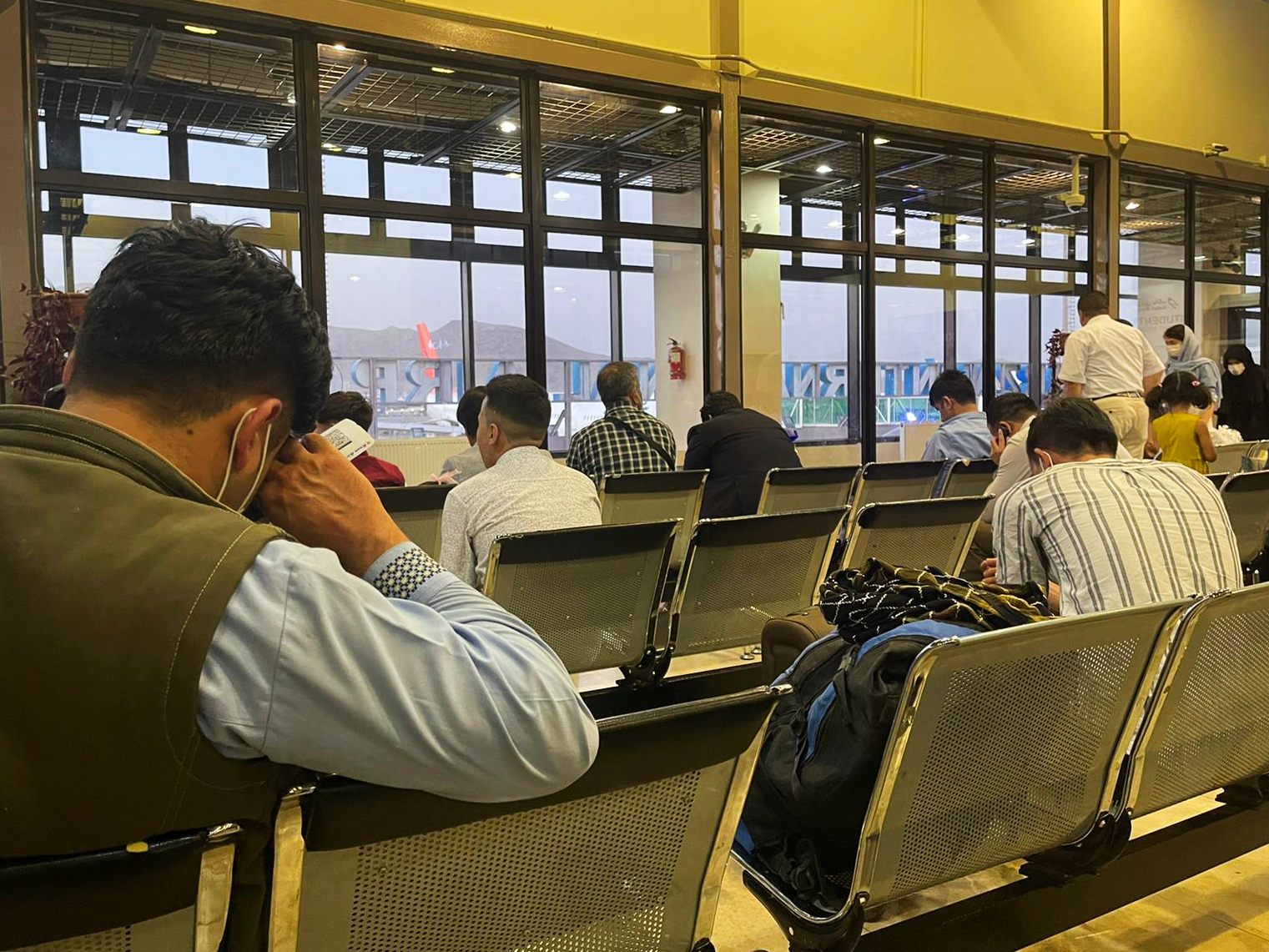 Passengers trying to fly out of Kabul International Airport wait in the terminal in Kabul, Afghanistan on Friday, August 13th 2021. Picture by: Tameem Akghar/AP/Press Association Images

In a news conference at the White House, he admitted images of people desperately trying to flee the Taliban at the airport in Kabul were "heart-breaking" and "gut-wrenching" - but insisted he is "focused on getting this job done".

He said: "This is one of the largest, most difficult airlifts in history. We're going to do everything that we can to provide safe evacuation to our Afghan allies and partners.

"Any American that wants to come home, we will get you home."

Mr Biden said 13,000 people had been safely evacuated from Afghanistan since August 14th - the day before Kabul fell to the Taliban - but added the mission was "dangerous" and "every resource necessary" would be mobilised.

He said the US would "retain a laser focus" on its counter-terrorism mission in the country to prevent it being used as a base to launch attacks, and warned the Taliban that any threat to the US forces would be met with a "swift response".

Mr Biden has faced criticism for the rapid withdrawal of US troops from Afghanistan, with the Taliban now back in control of the country 20 years after being ousted.

He called the pullout of military personnel the "only rational thing to do" and insisted that US allies agreed with the decision.

Speaking to reporters, he said: "I've seen no questioning of our credibility from our allies around the world," and he said: "I've not seen that, as a matter of fact the exact opposite."

He added: "There'll be plenty of time to criticise and second guess when this job is done."

There is a race against time to get westerners and their Afghan allies - including translators, interpreters and other vulnerable people - out as American soldiers, who are leading the evacuation effort, are due to leave the country by August 31st.

Tens of thousands of people remain to be evacuated ahead of the deadline.

Main image: Hundreds of people gather near a US Air Force transport plane at the perimeter of Kabul International Airport in Afghanistan on Monday, August 16th 2021. Picture by: Shekib Rahmani/AP/Press Association Images