Michael Bloomberg has now spent €420m on his US presidential bid

The US billionaire and Democratic presidential candidate Michael Bloomberg has spent more than $4...

Michael Bloomberg has now spent €420m on his US presidential bid

The US billionaire and Democratic presidential candidate Michael Bloomberg has spent more than $460 million (€420 million) on his presidential campaign to date, according to new figures.

Mr Bloomberg entered the race in November, and since then his campaign has spent unprecedented amounts on advertisements.

Figures released by the US Federal Election Commission (FEC) show Mr Bloomberg's campaign has raised $464,145,124 to date - all from the billionaire's own fortune, meaning there is no limit on his spending.

Republican Donald Trump, in contrast, has raised less than half that amount for his own re-election effort - with those funds a mixture of individuals' contributions and committee fundraising. 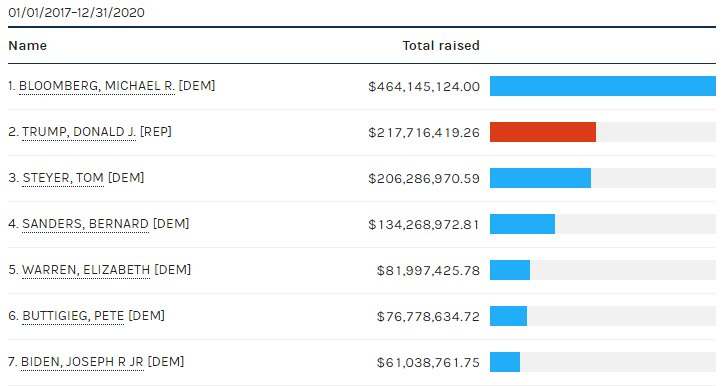 Polls in the US have shown recent gains in support for Mr Bloomberg, despite his late entry to the race and his non-participation in several of the early primary contests.

Senator Sanders continues to lead in opinion polls, while former vice-president Joe Biden continues to struggle to gain momentum after earlier being the clear frontrunner.

The extraordinary spend by Mr Bloomberg made him the focus of sharp criticism from a number of the other remaining Democratic presidential hopefuls during the latest televised debate earlier this week.

He also was attacked for his record as New York City mayor, as well as reported inappropriate past comments about women.

Senator Elizabeth Warren said: "I'd like to talk about who we're running against - a billionaire who calls women 'fat broads' and 'horse faced lesbians'.

"Democrats take a huge risk if we just substitute one arrogant billionaire for another."

We have a grotesque situation where billionaires like Mr. Bloomberg have an effective tax rate lower than the middle class. #DemDebate pic.twitter.com/HzzWUAj05T

Democratic presidential hopefuls are currently preparing for the next round of primary and caucus votes - with Nevada and South Carolina the next states set to select their preferred nominee.

'Super Tuesday' - a major landmark in the race which will see primaries in more than a dozen states - will take on March 3rd.

Newstalk's 20 most influential moments of the last 20 years

HSE given €50 million extra in funding for key services