Former President Mary McAleese said it must be 'very difficult' for Queen Elizabeth to see how sh...

Former President Mary McAleese said it must be 'very difficult' for Queen Elizabeth to see how she and her family are portrayed in The Crown.

Mrs McAleese said she and the Queen got on "like a house on fire" when they first met, and that the monarch is someone with a "deep affection" for Ireland.

As part of a series on the 20 most influential moments of the last 20 years, Newstalk has today been looking back at the Queen's historic visit to Ireland in 2011.

Mrs McAleese was president at the time of the visit, but she told The Hard Shoulder her experiences with the Queen date back to before her time in Áras an Uachtaráin.

They'd previously met in 1995, during the soon-to-be-president's time as a senior staff member at Queen's University in Belfast.

Mrs McAleese recalled: "My job was to take her around and introduce her to all the groups of people who were ready to meet her.

"Some of my colleague in Queens were taking a kind of delight in the fact that they thought I would be obliged to curtsy to her... I don't curtsy. I regard all of that as long past its sell-by-date."

It did provide her with something of a diplomatic headache, but she raised the issue directly with Royal Family officials to see whether it would be an issue - and ultimately it wasn't.

She said: "As it happened, she and I got on like a house on fire. I found her very easy company.

"I did explain to her how I - who had grown up in Northern Ireland, in a household that was very law-abiding and horrified by the Troubles... nonetheless on Christmas Day, when she spoke to her 'loyal subjects', we always knew there was a view we were not among them.

"We talked about the sense of remoteness.. this phrase 'loyal subjects', and how it was desperately loathed in the Irish context.

"She said to me she understood that, and she started to explain her desire to visit the Republic. I knew then it was about someone who knew the history, and would like to be involved in some way playing a role in the reconciling." 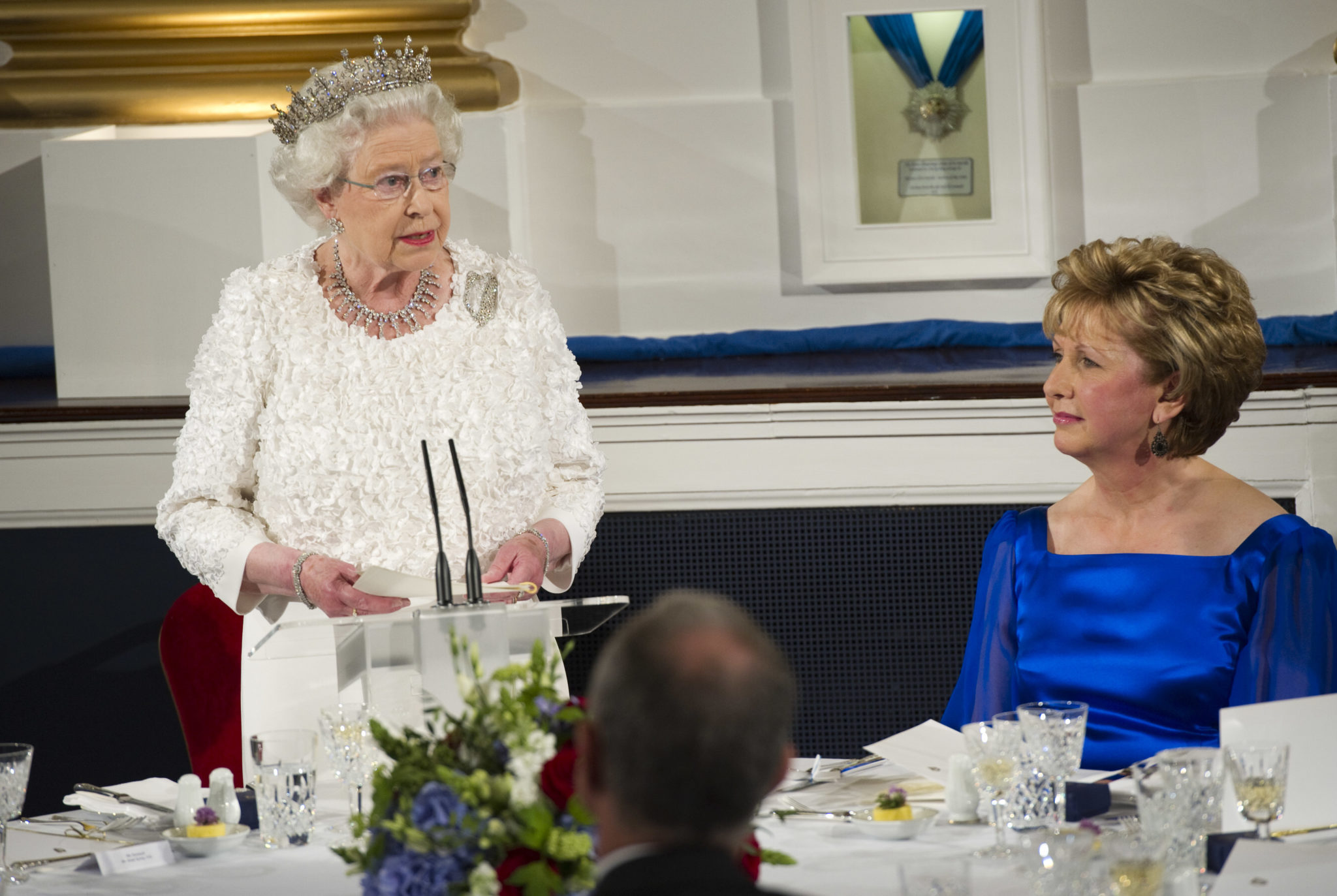 Queen Elizabeth II delivers a speech watched by Irish President Mary McAleese during a State Dinner at Dublin Castle on May 18, 2011 at the end of the second day of an historic visit to Ireland. PA Images

When Mrs McAleese entered the Áras, she knew the Queen would eventually visit the Republic.

She approached the then Taoiseach Brian Cowen to initiate the formal invite - and the incoming Taoiseach Enda Kenny was 'immediately agreeable' to the prospect.

An agreement on a visit was made in March, and the visit happened in May - a speedy turnaround which President McAleese says was the result of officials pulling out 'all the stops' to get it arranged quickly.

President McAleese had some suggestion for the visit - such as the Queen saying 'five words' in the Irish language during a speech, and a visit to the Garden of Remembrance.

She said: "I can tell you, hand on heart... there was absolutely nothing I suggested that eventually didn't make it into it."

For the then president, there were 'quite a number' of standout moments during the trip - including the use of the Irish language, an 'unexpected nodding of her head' at the Garden of Remembrance, and the monarch stepping out to the 'hallowed turf' of Croke Park.

Mrs McAleese said the Queen was informed by the then GAA president Christy Cooney of the history of the Hogan Stand and Bloody Sunday.

She recalled: "I thought she was going to break into tears... she just said very quietly 'I know, I know'.

"It was said in a tone of abject sorrow... She was desperately moved." 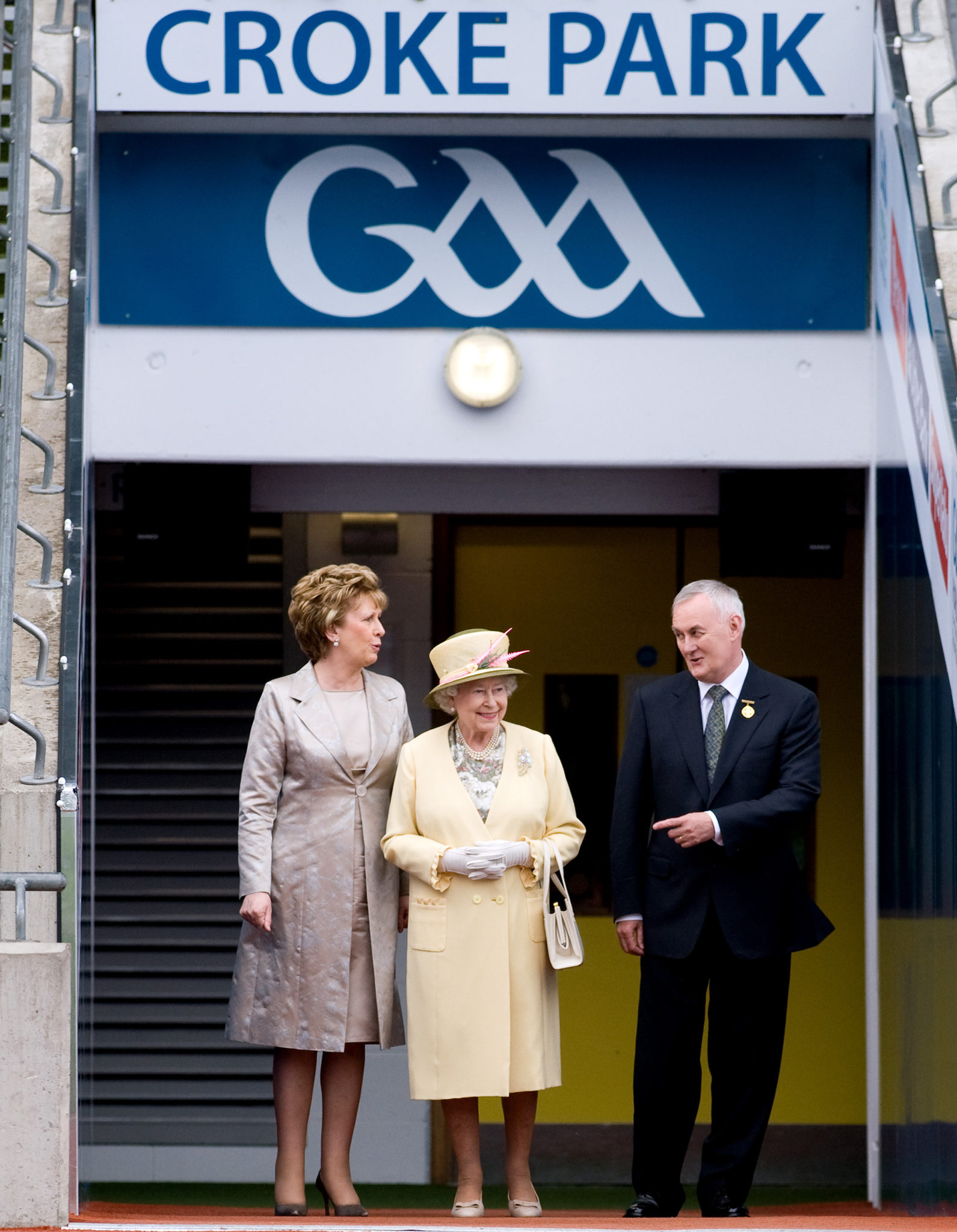 Meanwhile, another standout moment came in a moment of unexpected political solidarity.

Mrs McAleese said: "Sinn Féin had decided to have nothing to do with the visit... they had instructed all their councillors and politicians to not take any hand, act or part in any of the events.

"As it happened, the mayor of Cashel [Michael Browne] was a Sinn Féin member. Completely out of the blue on the day [the Queen] arrived in Cashel, he went and met her and welcomed her.

"This man decided off his own bat to do that. None of us were to know at that time he was dying of cancer, and he would die just a few months later. But it was an act of real courage... political courage."

'I have huge respect for her'

Mary McAleese does still keep in touch with the Queen - saying it's not like they write every week, but 'every so often we would engage in correspondence'.

She said: "I'm not by any means a monarchist, for from it... but she is a person I have huge respect for.

"What she did in those four days [in Ireland], I think played a role in a time of really quite wonderful healing of history."

The Queen is very much back in the public's mind as a result of the hit Netflix drama The Crown - and, like many others, the former Irish president has watched the show.

She said: "It's very watchable if you're not a member of the Royal family - that's the best I can say about it. It's certainly very good entertainment.

"I think her husband is 99, and she's in her late 90s... it must be very hard after a lifetime of self-sacrificing service to her nation... to have to see yourself [and your family] portrayed in the light in which she's portrayed in The Crown.

"From human being to human being, my experience of her... is of a woman of great sense of humour, very exceptionally well-read on Irish affairs... and a deep affection for Ireland, which she really wanted to exhibit when she came here."

Main image: Queen Elizabeth II (right) stands with Irish President Mary McAleese as they arrived for a reception and performance at the Dublin Convention Centre in May 2011. Picture by: Niall Carson/PA Archive/PA Images