Lyra McKee's family has described the journalist as a "gentle innocent soul who wouldn't wish ill...

Lyra McKee's family has described the journalist as a "gentle innocent soul who wouldn't wish ill on anyone".

The family's statement has been released ahead of Lyra's funeral later today.

The service of thanksgiving for Lyra's life will take place at St Anne’s Cathedral on Donegall Street at 1pm, led by the Dean of St Anne’s Stephen Forde and Fr Martin Magill.

President Michael D Higgins, Taoiseach Leo Varadkar and the UK's Northern Secretary Karen Bradley are among those set to attend the service.

It's been confirmed this morning that British Prime Minister Theresa May and UK Labour leader Jeremy Corbyn will also be attending.

In a statement released last night, Lyra's family hailed her as a "smart, strong-minded woman who believed passionately in inclusivity, justice and truth".

They said: "Lyra spoke to and made friends with anybody and everybody, no matter what their background, those of all political views and those with none.

"We would like to thank everyone for the outpouring of support and love we have witnessed these past few days.

"It has been of immense solace that Lyra meant so much to so many".

"Message of positivity and hope" 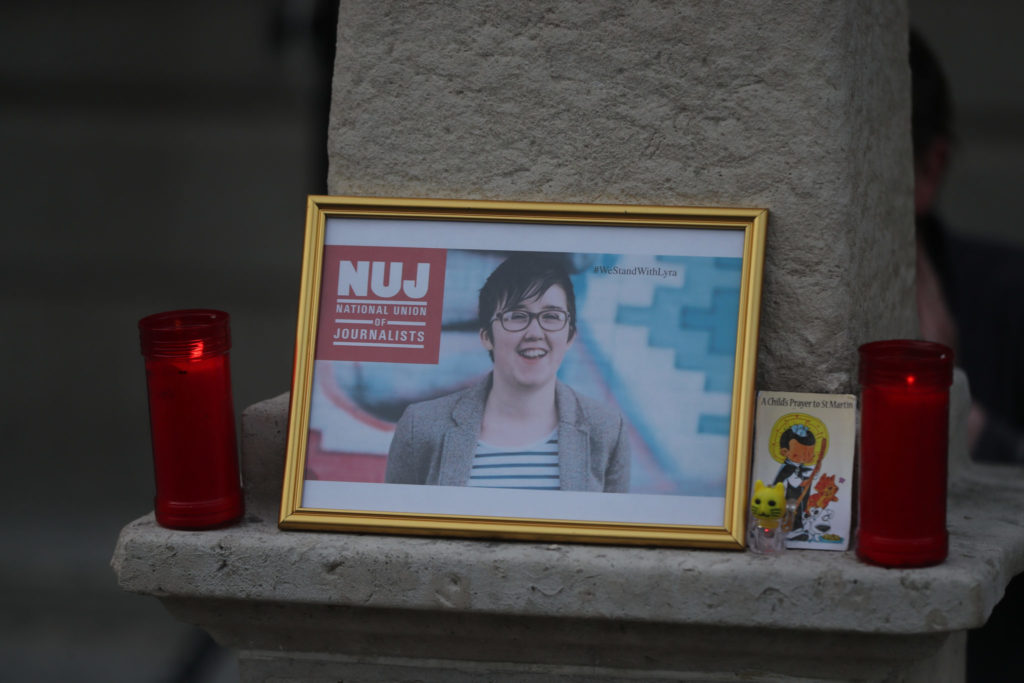 A image of 29 year-old Lyra McKee displayed during a vigil in Dublin for the murdered journalist. Picture by: Niall Carson/PA Wire/PA Images

The family said they're now encouraging anyone who knew the 29-year-old to "continue her message of positivity and hope".

They added: "We as a family know that the whole community has been touched by the events of Thursday night and that many are rightly angry.

"However, we would ask that Lyra's life and her personal philosophy are used as an example to us all as we face this tragedy together.

"Lyra's answer would have been simple, the only way to overcome hatred and intolerance is with love, understanding and kindness."

The PSNI investigation into Lyra's killing is continuing.

Earlier this week, the so-called New IRA admitted responsibility for the killing.

The paramilitary group said it offered "full and sincere apologies" for the journalist's death.

The group's statement was widely criticised, with SDLP leader Colum Eastwood calling it an "absolute disgrace" that was "devoid of any humanity".

Karen Bradley, meanwhile, told the House of Commons: "To those responsible for this act of terrorism we say we have heard your excuses and your hollow apologies - no one buys it - this was no accident.

"There is nothing that can justify this murderous act … and you are being called out for what you really are."

Yesterday evening a 57-year-old woman - the third person to be arrested in connection with the murder - was released without charge.