US President Donald Trump has confirmed the founder and leader of the so-called Islamic State gro...

US President Donald Trump has confirmed the founder and leader of the so-called Islamic State group, Abu Bakr al Baghdadi, is dead.

He was killed in a raid on a compound by US special operation forces in north-western Syria on Saturday night.

Al Baghdadi, who had a US$25m (€22.5m) bounty on his head, had been the subject of an international manhunt for years.

He was known to be at the location of the operation 48 hours prior to the attack, a senior Turkish official said.

Making a statement at the White House on Sunday, Mr Trump said: "Last night the United States brought the world's number one terrorist leader to justice.

"He was the founder and leader of ISIS - the most ruthless and violent terror organisation anywhere in the world".

He said the US had been searching for the leader "for many years" - describing it as "the top national security priority of my administration".

He added that no US personnel were lost in the operation, but "a large number" of Baghdadi's fighters were killed with him.

On the death, President Trump said: "He died after running into a dead-end tunnel: whimpering and crying and screaming all the way".

Mr Trump said the compound in north-western Syria had already been cleared, with 11 children moved out of harm's way.

"The only ones remaining were Baghdadi in the tunnel, and he had dragged three of his young children with him - they were led to certain death".

"He ignited his vest killing himself and the three children - his body was mutilated by the blast, the tunnel had caved in on it in addition.

"But test results gave certain, immediate and totally positive identification: it was him."

Mr Trump added that he watched much of the operation.

The Syrian Observatory for Human Rights, a Syria war monitor, reported an attack carried out by a squadron of eight helicopters accompanied by a warplane belonging to the international coalition.

IS operatives are believed to be hiding in the area, it said.

It said the helicopters targeted IS positions with heavy strikes for about two hours, during which jihadists fired at the aircraft with heavy weapons.

The UK-based observatory, which operates through a network of activists on the ground, documented the deaths of nine people as a result of assault. 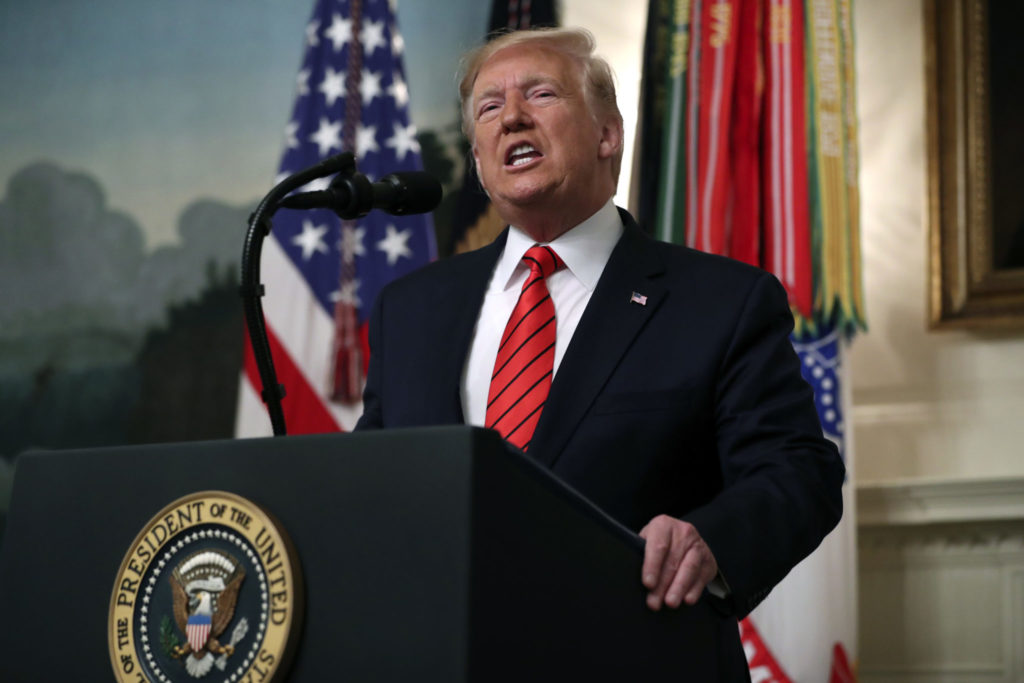 The strike came amid concerns that a recent US pullback from north-eastern Syria could infuse new strength into the militant group, which had lost vast stretches of territory it had once controlled.

Al Baghdadi, who led IS for the past five years, was seen in the summer of 2014 in the pulpit of the Nouri mosque in Mosul.

He urged Muslims around the world to swear allegiance to the caliphate and obey him as its leader.

"It is a burden to accept this responsibility to be in charge of you," he said in a video.

In 2015, he was reportedly severely injured in an airstrike in western Iraq, and he was possibly even killed a few years later - according to Russian officials.

He had also been heard in a number of audio messages to followers, including an 18-minute speech given earlier this year.

Al Baghdadi oversaw a shift away from large-scale attacks towards smaller-acts of violence that would be harder for law enforcement to prevent.