Self-sampling for HPV at home is a “useful” tool in the battle against cervical cancer, Cork-...

Self-sampling for HPV at home is a “useful” tool in the battle against cervical cancer, Cork-based GP Dr Doireann O’Leary has told Newstalk.

Home screening is already available in a number of countries and Dr O’Leary said it would be particularly useful for those who are reluctant to attend an in person appointment:

“It has a role, Andrea, and particularly it helps us to detect HPV in people who don’t attend cervical screenings,” Dr O’Leary told Lunchtime Live.

“So unfortunately, there will always be people who don’t attend their screening for various reasons. Whether they’re embarrassed about attending, they’ve had bad experiences or they find attending for a smear test uncomfortable.

“So home swabs for those women can help. It can help to do the HPV screening at home.

"This isn’t available in Ireland at the moment - this is just something that might come on stream in the future as an adjunct to our screening programme... It is operational in some parts of the UK at the moment.

"There’s a screening programme called YouScreen in London and they are focusing on the boroughs of London where cervical screenings attendances are particularly low.” 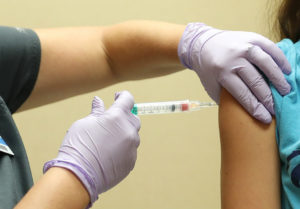 The World Health Organisation has said self-sampling could increase the number of women diagnosed early and Dr O’Leary said it would be “useful” if the HSE were to roll it out in Ireland:

“It would be useful. You know, [it’s] preferable attending a screening [and] seeing your GP or practice nurse, talking about symptoms, screening for red flags.

“Because when we’re doing a cervical screening test, there’s so much more to the appointment than just the test.

“Talking about those symptoms, whether or not the woman has been vaccinated against HPV and just talking all about that.

“So there’s huge clinical benefit there in talking to the patient about her life, what’s going on, risk factors, is she a smoker, is she not a smoker.

“Because sometimes you’ll actually bypass doing a cervical screening test if a patient has a red flag symptom. They will need to be referred directly to gynecology”.

HPV vaccination rates for First Year students have dropped due to covid; this will result in more cancers in years ahead. However, this could be prevented by expanding HPV vaccination beyond First Years. In @NHSuk it’s given for free up to age 25. @HSELive should consider same.

“But no matter what we do, no matter how much public health awareness there is about the importance of screening, there will always be people who don’t attend for various reasons.

“So home sampling is about capturing that cohort and getting them into the system in a way that gives them home testing - which is more preferable to that cohort of women who just won’t attend.”

Main image: A pap smear can detect whether a women needs treatment for cervical cancer.