Four people have died - including one woman who was shot - during violent protests, after support...

Four people have died - including one woman who was shot - during violent protests, after supporters of outgoing US President Donald Trump stormed the Capitol Building in Washington DC.

The three other people died during the protests of "medical emergencies", local police confirmed, with officers making 52 arrests.

Politicians were to formally declare Joe Biden the winner of November's election, with Mr Trump still falsely claiming the result was fraudulent.

In dramatic scenes that drew international condemnation - including Taoiseach Micheál Martin and Foreign Affairs Minister Simon Coveney - supporters of Mr Trump brought violence to the seat of America's democracy on Wednesday - prompting the US Capitol to be put into lockdown.

The Taoiseach said: "The Irish people have a deep connection with the United States of America, built up over many generations.

"I know that many, like me, will be watching the scenes unfolding in Washington DC with great concern and dismay."

The Irish people have a deep connection with the United States of America, built up over many generations. I know that many, like me, will be watching the scenes unfolding in Washington DC with great concern and dismay. 🇮🇪 🇺🇸

While Minister Coveney said the scenes were "a deliberate assault on democracy by a sitting President & his supporters, attempting to overturn a free & fair election".

Shocking & deeply sad scenes in Washington DC - we must call this out for what it is: a deliberate assault on Democracy by a sitting President & his supporters, attempting to overturn a free & fair election! The world is watching!
We hope for restoration of calm. pic.twitter.com/1OdQYEB35K

Ursula von der Leyen, the president of the European Commission, posted on Twitter: "I believe in the strength of US institutions and democracy. Peaceful transition of power is at the core."

She added that Mr Biden "won the election" and said she would "look forward to working with him as the next President of the USA".

The White House revealed the US National Guard had been called in by Mr Trump following clashes between rioters and Washington DC police, while a curfew has been ordered across the city. 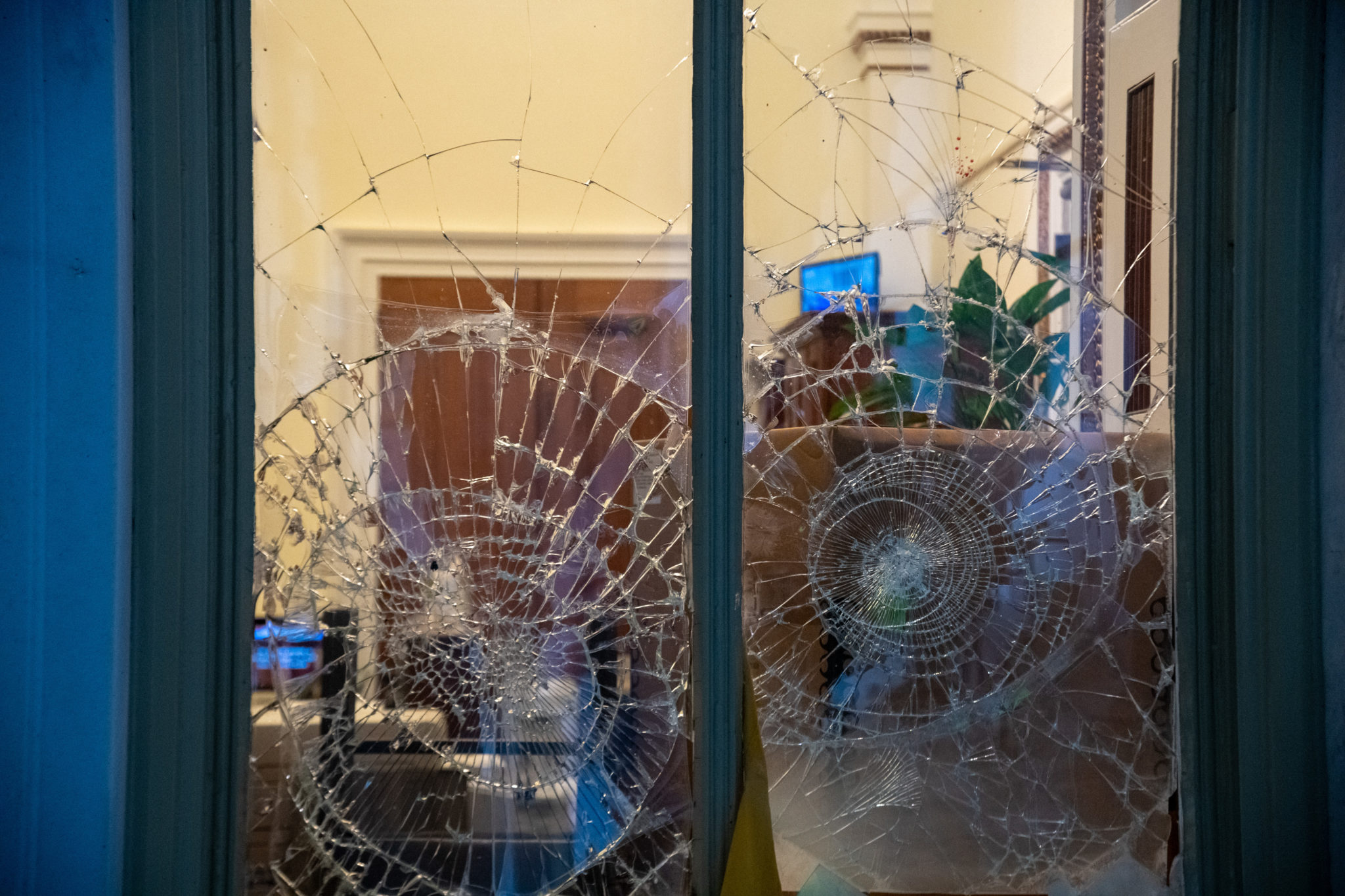 An office inside the US Capitol is seen through windows shattered by supporters of President Trump as they stormed the building in Washington, DC. Picture by: Matthew Rodier/SIPA USA/PA Images

As darkness fell, the FBI were also on the ground to clear remaining protestors.

Groups of Trump supporters breached metal barricades and stormed their way into the Capitol Building as they disrupted the confirmation of Mr Biden's victory in November's election - a fortnight before his inauguration ceremony.

Local emergency services had earlier said one person was in a critical condition after being shot and at least five people - including a law enforcement officer - had been taken to hospital.

According to an NBC report, several officials said at least one improvised explosive device had been found on US Capitol grounds. 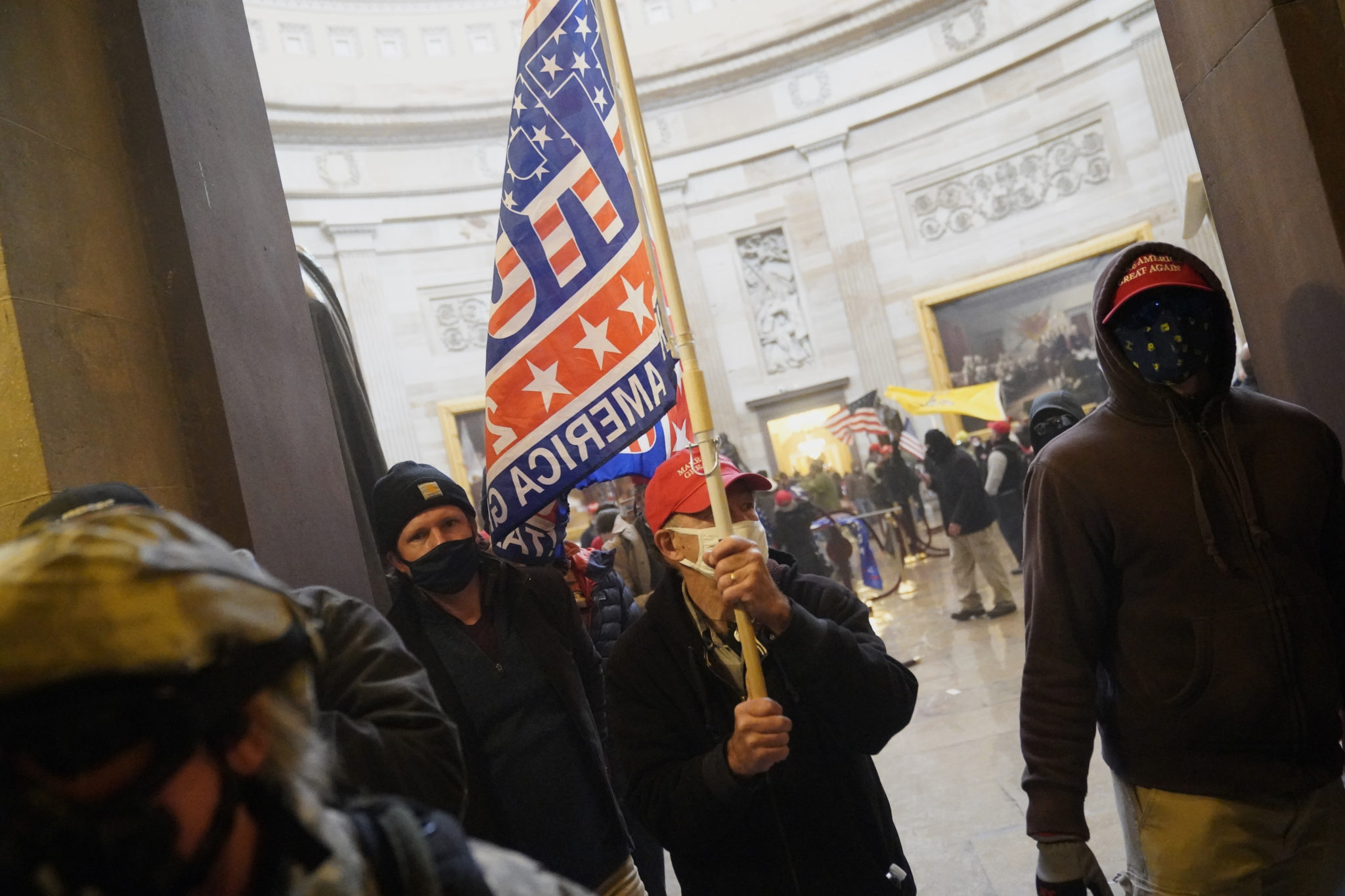 Protestors storm the US Capitol building during a joint session of Congress in Washington DC. Picture by: Sipa USA/SIPA USA/PA Images

And Mr Trump's Republican Party - parts of whom the president has criticised for failing to fully support his unproven claims of election fraud - revealed a suspicious device was found at their headquarters before being detonated by a bomb squad.

Both chambers of Congress in Washington DC were abruptly recessed as they debated Mr Biden's election win when the violence flared.

US Vice-President Mike Pence was ushered out of the Senate chamber to a secure location as protestors entered the Capitol building. 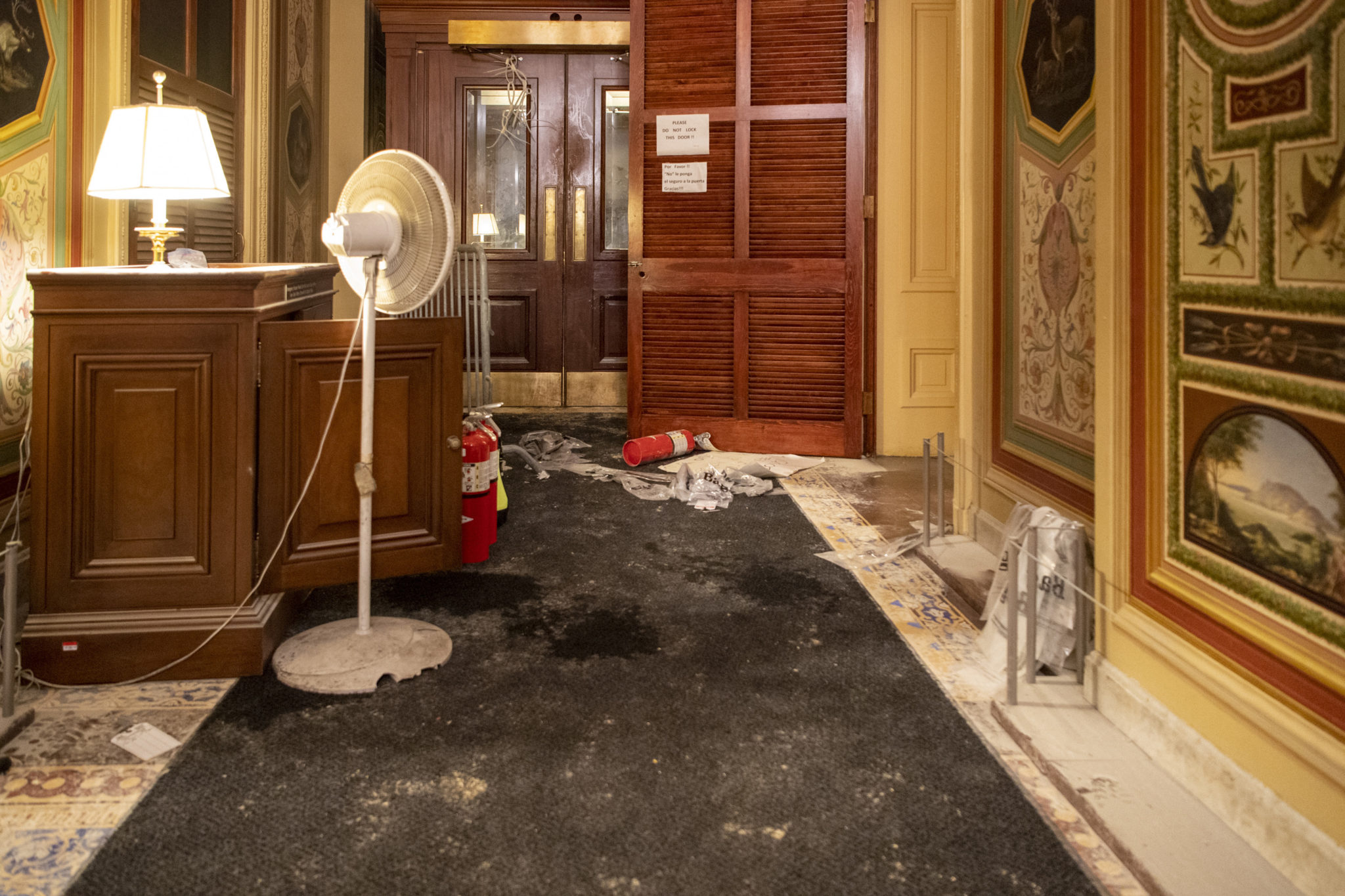 Debris and dust litters a northern entrance of the US Capitol after protesters swarmed the building in Washington, DC. Picture by: USA TODAY Network/SIPA USA/PA Images

In a televised address, Mr Biden said America's democracy was "under unprecedented assault" as he condemned the "small number of extremists dedicated to lawlessness" who had brought "chaos" to the US Capitol.

"This is not dissent, it's disorder. It's chaos. It borders on sedition and it must end, now," Mr Biden added.

"I call on this mob to pull back and allow the work of democracy to go forward."

The president-elect called on Mr Trump to go on national television to "defend the constitution" and "demand an end to this siege".

He did not explicitly condemn the scenes of violence, but urged those who had gathered at the US Capitol to disperse.

"I know your pain, I know your hurt - we had an election that was stolen from us," he claimed.

"It was a landslide election and everyone knows it, especially the other side."

"We don't want anybody hurt, it's a very tough period of time - there's never been a period of time like this where such a thing happened, where they could take it away from all of us.

"From me, from you, from our country."

Twitter swiftly added a warning message to Mr Trump's video, which read: "This claim of election fraud is disputed, and this Tweet can't be replied to, Retweeted, or like due to a risk of violence."

Twitter has also threatened him with "permanent suspension" from the platform.

It comes after the site demanded he remove tweets excusing the violence on Wednesday.

The company had earlier removed the 'retweet', 'like' and 'reply' functions on the video in which Mr Trump addressed his supporters.

"As a result of the unprecedented and ongoing violent situation in Washington, DC, we have required the removal of three @realDonaldTrump Tweets that were posted earlier today for repeated and severe violations of our Civic Integrity policy," Twitter Safety posted.

"This means that the account of @realDonaldTrump will be locked for 12 hours following the removal of these Tweets.

"If the Tweets are not removed, the account will remain locked.

"Future violations of the Twitter Rules, including our Civic Integrity or Violent Threats policies, will result in permanent suspension of the @realDonaldTrump account."

As a result of the unprecedented and ongoing violent situation in Washington, D.C., we have required the removal of three @realDonaldTrump Tweets that were posted earlier today for repeated and severe violations of our Civic Integrity policy. https://t.co/k6OkjNG3bM

"This is an emergency situation and we are taking appropriate emergency measures, including removing President Trump's video," said Facebook's vice-president for integrity, Guy Rosen.

"We removed it because on balance we believe it contributes to rather than diminishes the risk of ongoing violence."

We've assessed two policy violations against President Trump's Page which will result in a 24-hour feature block, meaning he will lose the ability to post on the platform during that time.

The company tweeted: "This will result in a 24-hour feature block, meaning he will lose the ability to post on the platform during that time."

He was also beaten by more than seven million votes in the popular vote.

Main image: Trump supporters climb through a window as they storm and rally at the Capitol Building in Washington, DC. Picture by: Bryan Smith/Zuma Press/PA Images

US envoy to Northern Ireland resigns over Trump protests