Europe's traditional centre has been fragmented in the European Parliament elections as more vote...

Europe's traditional centre has been fragmented in the European Parliament elections as more voters turn to green, liberal and far-right parties.

The far-right and pro-environment Greens gained precedence on Sunday following four days of votes across the EU.

More than 400 million people were eligible to vote in the elections and around half cast their ballot, a bloc-wide estimate showed on Sunday.

Turnout was at a two-decade high for ballots across all 28 European Union countries.

50.5% of EU citizens eligible to vote took part in the European elections, the highest turnout in 20 years. pic.twitter.com/2Z6IJmAih0

Commentators credited the increased enthusiasm to challenges ranging from climate change to the rise of eurosceptic parties.

The elections were viewed as a test of the influence of the nationalist, populist and hard-right movements. 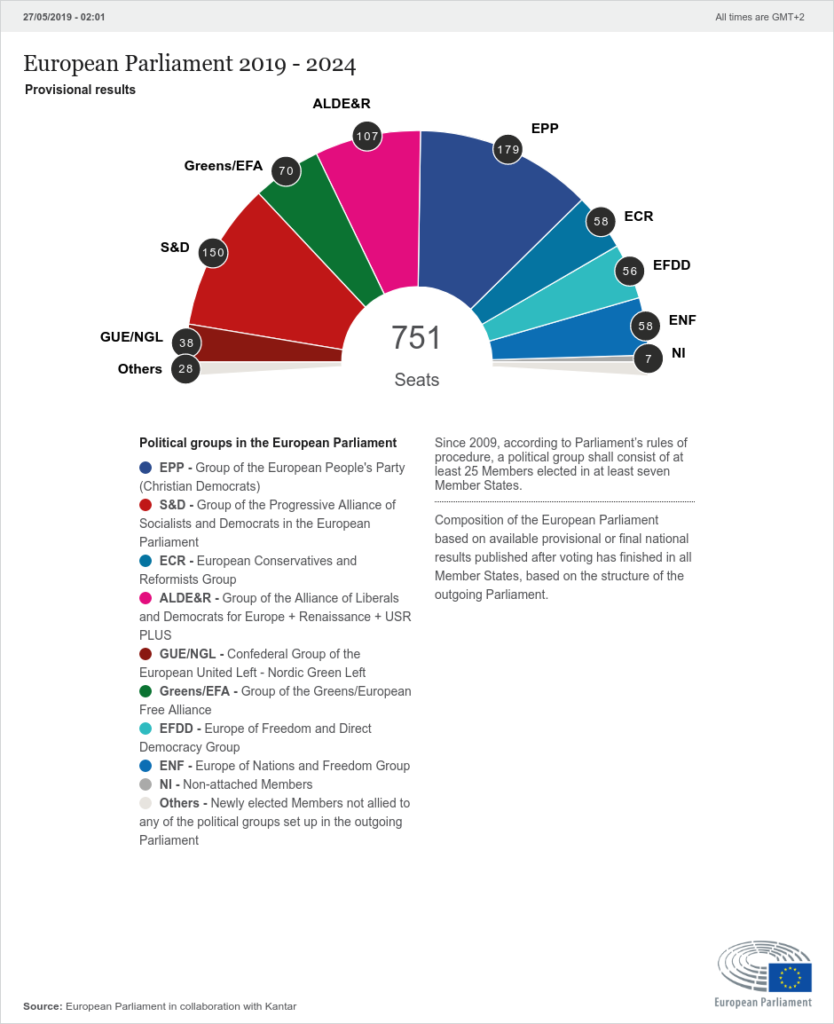 Provisional results from the European Parliament

Britain saw voters go to the extremes, with the strongest showing the newly-formed Brexit Party, led by Nigel Farage.

The Liberal Democrats were the second most voted for party there, jumping from one seat to 15, while the Conservatives faced a near wipe-out.

Ms Le Pen's anti-immigrant party came out on top with 24% in a rebuke of Mr Macron, who has made EU integration the heart of his presidency.

In Germany, Chancellor Angela Merkel's ruling coalition saw a drastic loss in support to the Green party, getting just 28% in their worst ever performance in European elections.

The Greens more than doubled their vote share in Germany, coming second with 22%.

Many countries in Europe have seen a rise in the Green vote, including the Nordic countries and Portugal.

Italy's right-wing League Party, led by Matteo Salvini, claimed 32% of the vote in early projections - a jump from around 6% five years ago.

Mr Salvini said: "Not only is the League the first party in Italy, but Marine Le Pen is first in France, Nigel Farage is first in Great Britain.

"Therefore, Italy, France and England: the sign of a Europe that is changing, that is fed up."

Pro-EU parties were expected to win around two-thirds of the 751-seat legislature that sits in Brussels and Strasbourg, according to the projections released by parliament and based on the results rolling in overnight.

The continent-wide voting impacted internal politics in many countries as well as the functioning of the bloc.

Ahead of the results, Ms Le Pen declared victory over Mr Macron's centrist party and said the expected result "confirms the new nationalist globalist division" in France and beyond.

The French president's party drew just over 21%, according to government results.

Speaking from the Syriza party offices, Mr Tsipras said that "the results does not rise to our expectations... I will not ignore it or quit".

The results will likely leave the EU parliament's two main parties - the European People's Party and the Socialists and Democrats - without a majority for the first time since 1979, prompting complex talks about forming a working coalition.

Current MEPs' terms end on July 1st, with the new parliament being seated the next day.