'Pay and display' parking prices will increase by an average of 10% from February 1st.

Street parking in Dublin is set to become more expensive from next week - a move one councillor has described as an "attack on motorists".

Dublin City Council has confirmed ‘pay and display’ parking charges in all zones across the capital will increase by an average of 10% from February 1st.

Those who use parking tags will pay 5-10c less per hour than those paying cash. 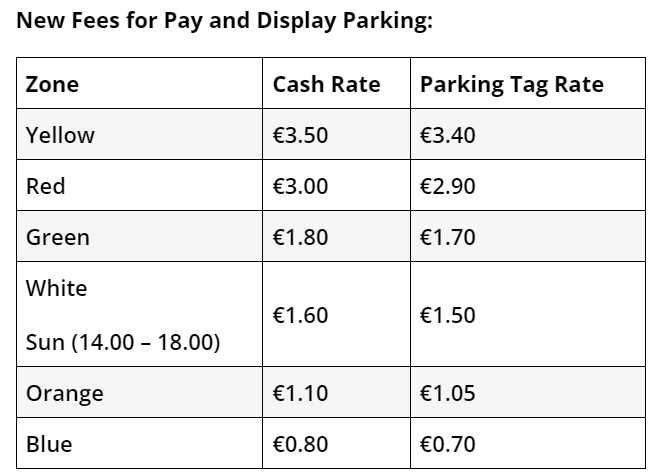 The council says the changes are aimed at deterring people from ‘long stay parking’ in the city, so there’s a “high turnover of users of these parking spaces”.

Officials also want to encourage motorists to consider public transport when travelling into the city centre.

Speaking on Newstalk Breakfast, he said: “This is an attack on the motorists, rather than a challenge to the motor industry in relation to climate action and the consequences of car fumes.

“We talk about language like climate justice… this is an injustice to the many motorists who are going to be really hard-pressed.”

He argued that the impact of this is not something Dublin City Council officials will understand, as they have their own car parks.

He also suggested many members of the public are “terrified” of using public transport to get into the city, due to reports of anti-social behaviour on trains and buses.

However, she said this change does not mean cars can't actually come into the city centre.

She explained: "The reason why there’s an increase… is that there is to be a high turnover of car parking in the city.

"Right now, we have people coming in and because the street parking is cheaper, they stay for longer.

“We want people to come in, do what they need to do - visit the shops, support retail - and then leave. If they stay for longer, then go for public transport.”

Over 1,500 social housing offers refused across the country last year