The US President Donald Trump has said he will visit Ireland this year. He was speaking as he met...

The US President Donald Trump has said he will visit Ireland this year.

He was speaking as he met Taoiseach Leo Varadkar in the White House for the annual St Patrick's Day meeting.

The two leaders are also taking part in the shamrock presentation ceremony.

US President Donald Trump says he will visit Ireland this year. pic.twitter.com/yXIEHapiRx

Asked if he would visit Ireland during a press conference, Mr Trump said: "I will, I'll be coming at some point during the year.

"I missed it last time and I would have loved to have been there, and it's a special place.

"I have a very warm spot for Doonbeg - I will tell you that - and it's just great place".

Speaking in the Oval Office, Mr Varadkar said: "Just wanted to say thanks very much for meeting us again - it's an enormous privilege for Ireland as a small country to have this annual meeting on account of St Patrick's Day.

"It's a chance to make even closer and tighter the bonds between the US and Ireland".

"I look forward to you talking to you later about Brexit, giving your our perspective on it, the real importance of protecting the Good Friday Agreement and the really hard won peace in Northern Ireland".

Mr Varadkar also said he would raise the issues of immigration and trade. 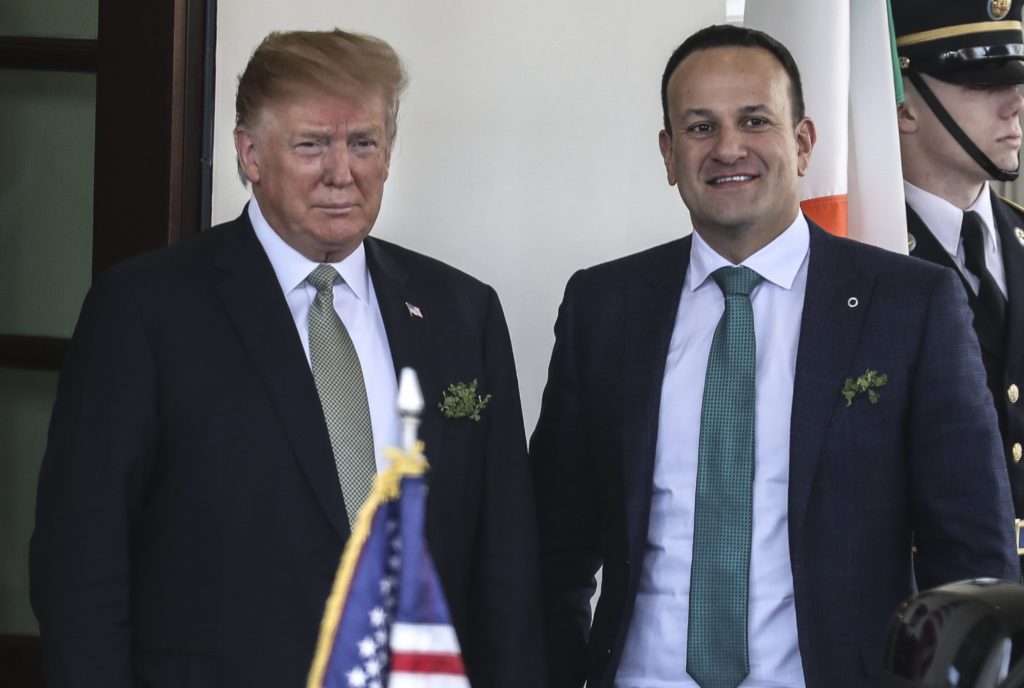 On Brexit, Mr Trump said: "I hate to see everything being ripped apart right now.

"I don't think another vote would be possible because it would be very unfair to the people that won.

"But I thought it would happen, it did happen, and both sides are very, very - they're cemented in.

"And actually the issue on the border of Ireland is one of the most complex points".

"I would like to see that whole situation with Brexit work out".

"It's very sad to see what's happening there", he added.

Asked his opinion Brexit by Mr Trump, Mr Varadkar said: "I regret that Brexit's happening, and the UK was really important part of the European Union but they're going now and that's their decision.

"But the most important thing for us in Ireland is that their decision to leave shouldn't cause any problems in Northern Ireland - where people actually vote to stay - and that we shouldn't have a hard border.

"Also we want to make sure that we still have frictionless trade between Britain and Ireland".

President Trump hosted Ireland this morning in the White House. The Irish relationship with the US remains very strong. We had a great discussion about trade, Northern Ireland, Brexit and Irish immigration and I thanked him for his support protecting jobs at Aughinish. pic.twitter.com/dKoS0HBkSh

Mr Varadkar added: "I think it'll be a few years until the United Kingdom sorts itself out".

During a later speech on Capitol Hill, Mr Varadkar raised the prospect of Irish people being able to access E3 visas - currently only open to Australians.

The E3 visa is seen as significantly easier and less costly to obtain than the traditional visa.

The visa is renewable every two years for an indefinite period of time - meaning people can work on it for as long as they are employed.

"I believe the new E3 visa programme is true to our shared history and offers a chance for a new generation of talented, hard-working, dreamers to give something to this great country. I hope that will come to pass," Mr Varadkar said to applause.

Taoiseach Leo Varadkar has gifted a message of support for Ireland from 1937, signed by 300 US Congressmen and Governors, to US House Speaker Nancy Pelosi. She said she will display it "with great pride in the Speakers Office of the Capitol of the United States" pic.twitter.com/WBhr6ik3Rd

"When I was preparing for this speech, I had a chance to come across something really interesting in our archives.

"It's from 81 years ago - the year was 1937, the year our Constitution came into effect, and a message of support was sent to us from the United States signed by almost 300 Congressmen and Governors, Democrat and Republican alike.

"On that document are names like Harry Truman, Richard Russell and Henry Cabot Lodge Junior.

"So Madam Speaker as a token of appreciation, and the friendship between our two nations,  I'd like to return to you in Congress a framed copy of that message.

"To symbolise our historic connection, to remind us of our shared values and to inspire us of what we can achieve together in the future."

The US House Speaker Nancy Pelosi said: "Taoiseach Varadkar I will display that beautiful document with great pride in the Speakers Office in the Capitol of the United States.

"And I'm sure whoever is Speaker will always display that with great pride in that office for anyone who visits there to see - for so many reasons - the close ties between our two nations, and how far back that relationship goes in a very official way". 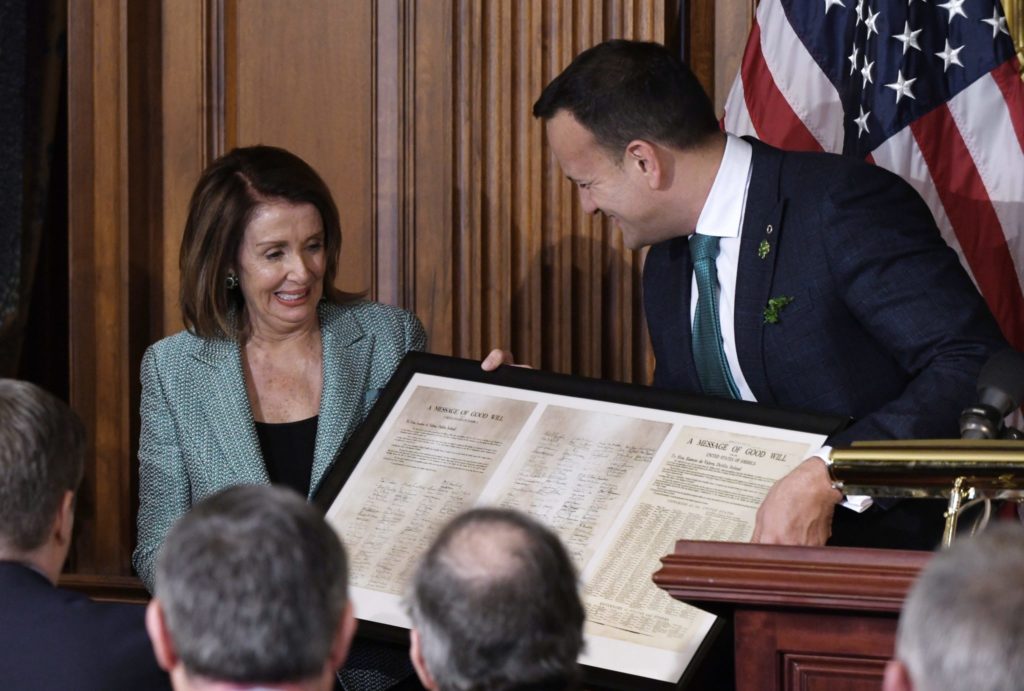 Taoiseach Leo Varadkar presents a copy of letter signed by 300 US Congressmen in 1937 to congratulate Ireland on its new Constitution to House Speaker Nancy Pelosi at the US Capitol in Washington, DC | Image: Olivier Douliery/DPA/PA Images

Earlier, Mr Varadkar and his partner Matt Barrett had breakfast with US Vice President Mike Pence.

The breakfast was seen as significant as Mr Pence has been criticised in the past for his views on LGBT rights.

He has been an opponent of laws promoting marriage equality.

With reporting from Shane Beatty in Washington