Mike Pence hosts Taoiseach and his partner for breakfast

The Taoiseach and his partner have arrived for breakfast with the US Vice President. Leo Varadkar...

Mike Pence hosts Taoiseach and his partner for breakfast

The Taoiseach and his partner have arrived for breakfast with the US Vice President.

Leo Varadkar and Matt Barrett arrived at Mike Pence's residence in Washington DC at around 8:30am local time.

They were greeted by Mr Pence and his sister Anne Pence Poynter.

Today's breakfast represents a significant moment, as Vice President Pence has been criticised in the past for his views on LGBT rights.

Taoiseach Leo Varadkar and his partner, Matt Barrett, arriving for breakfast here at the US Vice President Mike Pence’s residence in Washington. Quite a significant moment... pic.twitter.com/WRZaUwkAuH

He has been an opponent of laws promoting marriage equality.

According to The New York Times, the vice president has also faced accusations that he has supported 'conversion therapy': treatments to try and change someone's sexual orientation.

A spokesperson for Mr Pence denied those accusations, suggesting a past statement had been misinterpreted.

His wife Karen, meanwhile, made headlines earlier this year when she returned to teaching at a Christian school that does not allow gay students.

Mrs Pence is not present for today's breakfast as she's leading the US delegation to the Special Olympics in the United Arab Emirates.

After last year's visit to Washington, the Taoiseach confirmed he'd spoken with the Pences about equality issues.

He said: "They were very well briefed; they knew about my personal story; knew my partner was living in Chicago and they said that both Matt and I would be very welcome to visit their home in the future." 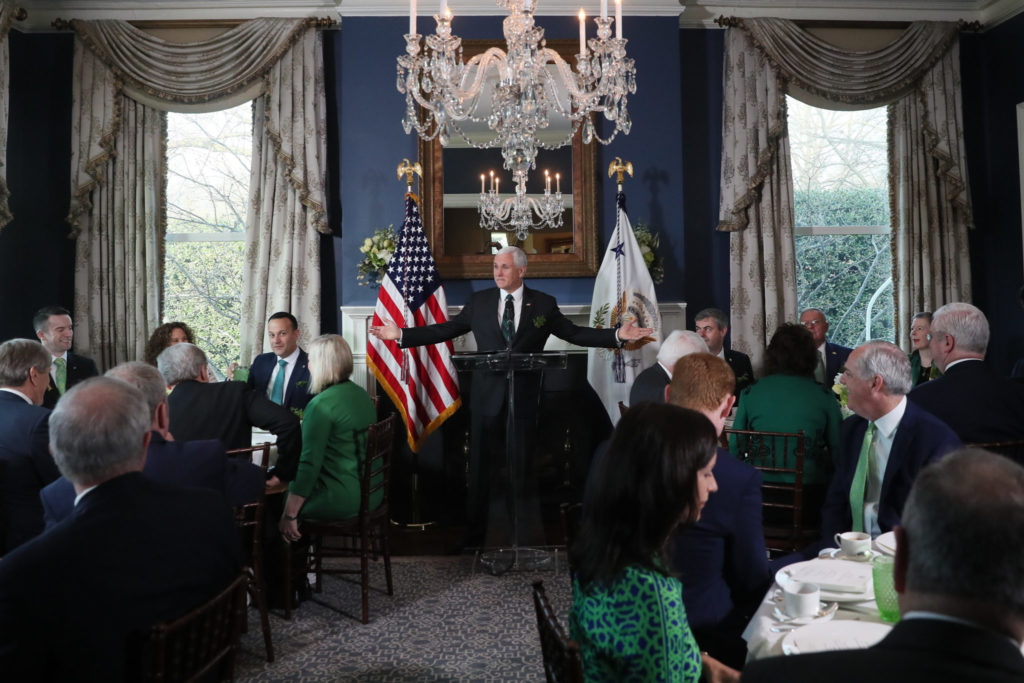 Taoiseach Leo Varadkar (seated left), who is on an official visit to the United States with his partner Matt Barrett (seated far left), listens to a speech by US Vice President Mike Pence (centre) during a breakfast meeting hosted by VP at his official residence in Washington DC. Picture by: Brian Lawless/PA Wire/PA Images

After breakfast, the Taoiseach will head to the White House to hold a bilateral meeting in the Oval Office with Donald Trump.

Taoiseach Leo Varadkar (left) is accompanied by his partner Matt Barrett (right) as he stands in a group photograph with the US Vice President Mike Pence (second right) and the VP's sister Anne Pence Poynter at the VP's official residence in Washington DC. Picture by: Brian Lawless/PA Wire/PA Images

US demands Syria ceasefire as it announces sanctions against Turkey