The US President Donald Trump urged Ukraine's leader to work with his lawyer Rudy Giuliani and th...

The US President Donald Trump urged Ukraine's leader to work with his lawyer Rudy Giuliani and the US attorney-general to investigate Joe Biden, a White House memorandum shows.

In the call, Mr Trump raised unsubstantiated allegations that Mr Biden, the former US vice president and Democrat candidate in the 2020 election, sought to interfere with a Ukrainian prosecutor's investigation of his son Hunter.

"There's a lot of talk about Biden's son, that Biden stopped the prosecution and a lot of people want to find out about that so whatever you can do with the Attorney General would be great," Mr Trump said to Ukrainian President Volodymyr Zelenskiy.

"Biden went around bragging that he stopped the prosecution so if you can look into it ... It sounds horrible to me."

The 30-minute conversation between the two leaders partly is one piece of a whistleblower's complaint that followed the July 25th call.

Top US Democrat, House Speaker Nancy Pelosi, announced on Tuesday that the House of Representatives will examine whether Mr Trump sought Ukraine's help to smear Mr Biden - the frontrunner for the 2020 Democratic presidential nomination.

Ms Pelosi said such actions would mark a "betrayal of his oath of office". She declared: "No one is above the law." 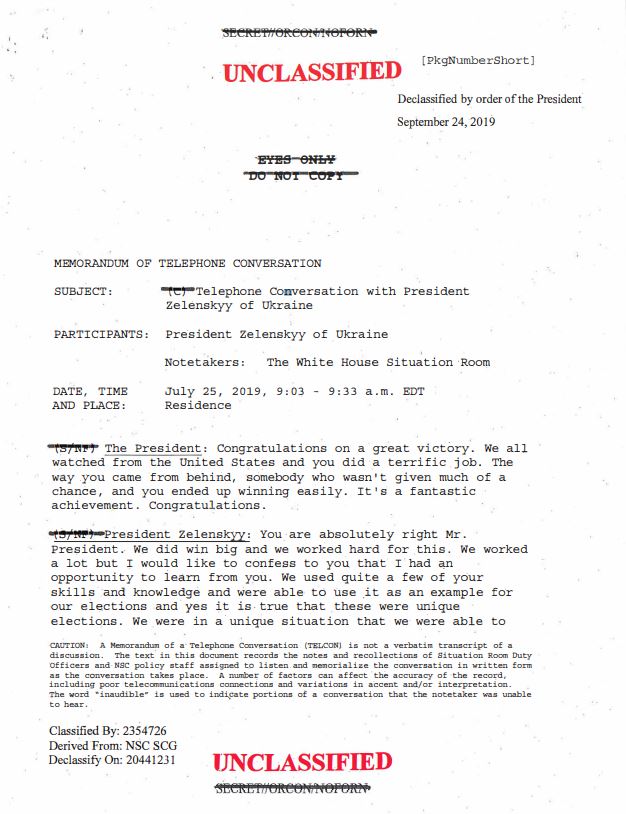 He continued: "I will ask him to call you along with the attorney general. Rudy very much knows what's happening and he is a very capable guy. If you could speak to him that would be great."

The US president also said there was "a lot of talk about Biden's son", lawyer and lobbyist Hunter Biden.

Mr Trump has dismissed the release of the rough transcript as routine, but Democrats claim it laid the ground for an impeachment inquiry.

Ahead of the memorandum's release on Wednesday, Mr Trump tweeted: "Will the Democrats apologize after seeing what was said on the call with the Ukrainian President? They should, a perfect call - got them by surprise!"

Will the Democrats apologize after seeing what was said on the call with the Ukrainian President? They should, a perfect call - got them by surprise!

However the released document is not a verbatim transcript - it is a memorandum of the telephone conversation.

In a footnote, the White House said: "The text in this document records the notes and recollections of Situation Room Duty Officers and-NSC policy staff assigned to listen.and memorialize the conversation in written form as the conversation takes place.

"A number of factors can affect the accuracy of the record, including poor telecommunications connections and variations in accent and/or interpretation."

In the days before the phone call, Mr Trump ordered advisers to freeze US$400m (€365m) in military aid for Ukraine, prompting speculation that he was holding out the money as leverage for information on the Bidens.

He has insisted he has done nothing wrong, but acknowledged blocking the funds, which were later released.

The connection to US Attorney-General William Barr could be the beginning of a serious problem for Mr Trump as it shows he took steps to involve the US government with a foreign country to investigate a political rival. 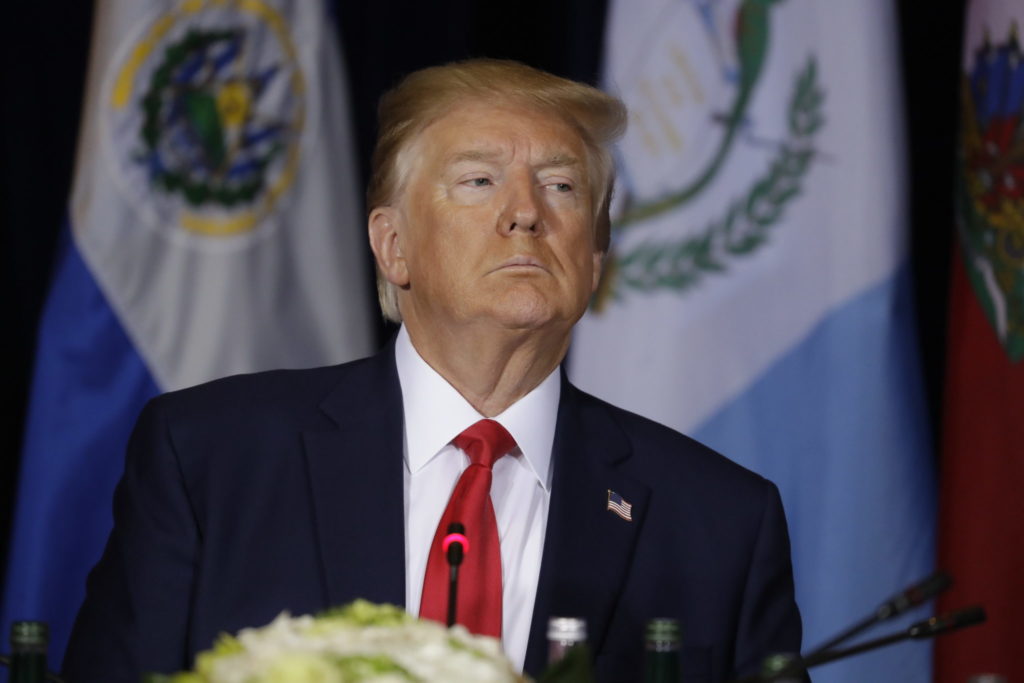 Former Democrat leader Hillary Clinton said that Mr Trump had "betrayed our country" and said she supports the impeachment inquiry.

She tweeted: "The president of the United States has betrayed our country. That's not a political statement-it's a harsh reality, and we must act.

"He is a clear and present danger to the things that keep us strong and free. I support impeachment".

The president of the United States has betrayed our country.

That’s not a political statement—it’s a harsh reality, and we must act.

He is a clear and present danger to the things that keep us strong and free.

The whistleblower, a member of the intelligence community, said in their complaint that they had heard the information from "White House officials", though did not have firsthand knowledge of the call, the US Justice Department official said.

Prosecutors from the department determined Mr Trump did not violate campaign finance law after reviewing the transcript.