Saturday marks a year since the first lockdown came into force in Ireland. However as more questi...

Saturday marks a year since the first lockdown came into force in Ireland.

However as more questions remain over the next steps, we look back at the messaging of the last 12 months.

It was back in June when Professor Luke O’Neill said face coverings should be a condition of travel on public transport.

He said: "It might be hard to make it compulsory - I would definitely make it a condition of travel on public transport, like the UK has done.

"It's just called a condition of travel: you can't get on the bus with a gun, nor can you get on a bus without a mask".

"There's always a few mavericks... who go against it and don't like the evidence or whatever." 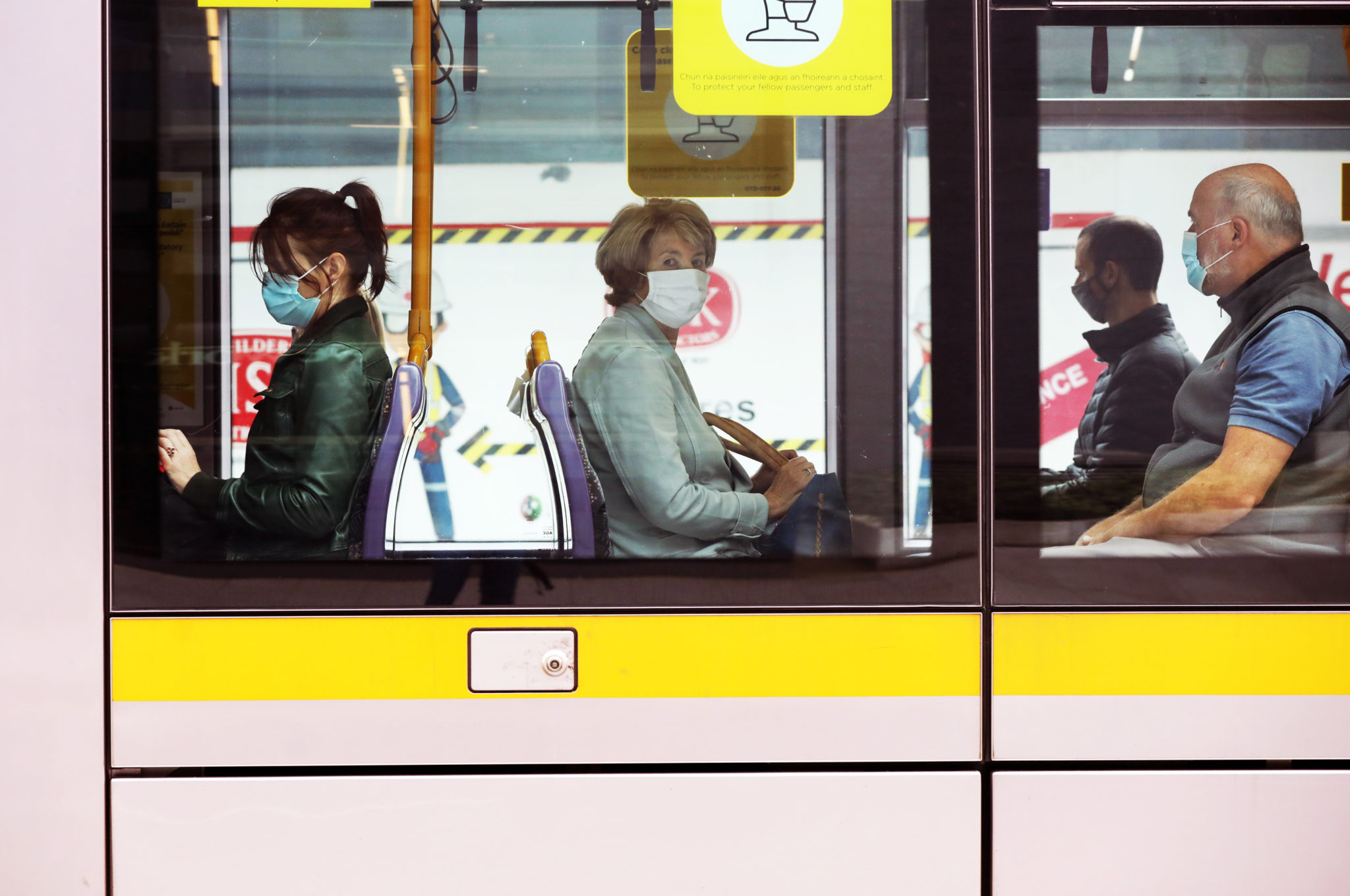 Passengers wearing face masks on the Luas in Dublin. Picture by: Leah Farrell/Rollingnews.ie

This was a day before a new national campaign was rolled out around the wearing of face coverings.

It followed a recommendation from the National Public Health Emergency Team (NPHET).

While it was the middle of July before face masks became compulsory in shops and shopping centres.

But there there was also some confusion over exactly how this would be enforced.

The director of Retail Ireland, Arnold Dillon, said it was not simply be a case of 'no mask no entry' to shops.

"Retailers will be actively encouraging the public to abide by these new rules, but there will be certain exemptions and the rules don't apply to everyone.

"So not everyone in a shop will necessarily be wearing a mask - but we do expect very positive and good compliance", he said last August.

It was also July when the World Health Organisation acknowledged, for the first time that COVID-19 may be spread by tiny particles suspended in the air.

The organisation previously said the virus was primarily spread by large respiratory droplets that come from coughing and sneezing.

However, following an open letter from 239 scientists in 32 countries, it  said airborne transmission cannot be ruled out in crowded or poorly ventilated spaces.

But it was not until October when experts suggested face visors and shields, being widely used by staff in bars and restaurants, were not effective protection.

Dr Ronan Boland said such visors "really have no useful place" other than protecting somebody's eyes when used in addition to another face covering.

"There isn't any debate among my medical colleagues... there's a clear understanding at this stage that face masks or coverings, which cover your nose and mouth, offer much greater protection to the people that surround you. 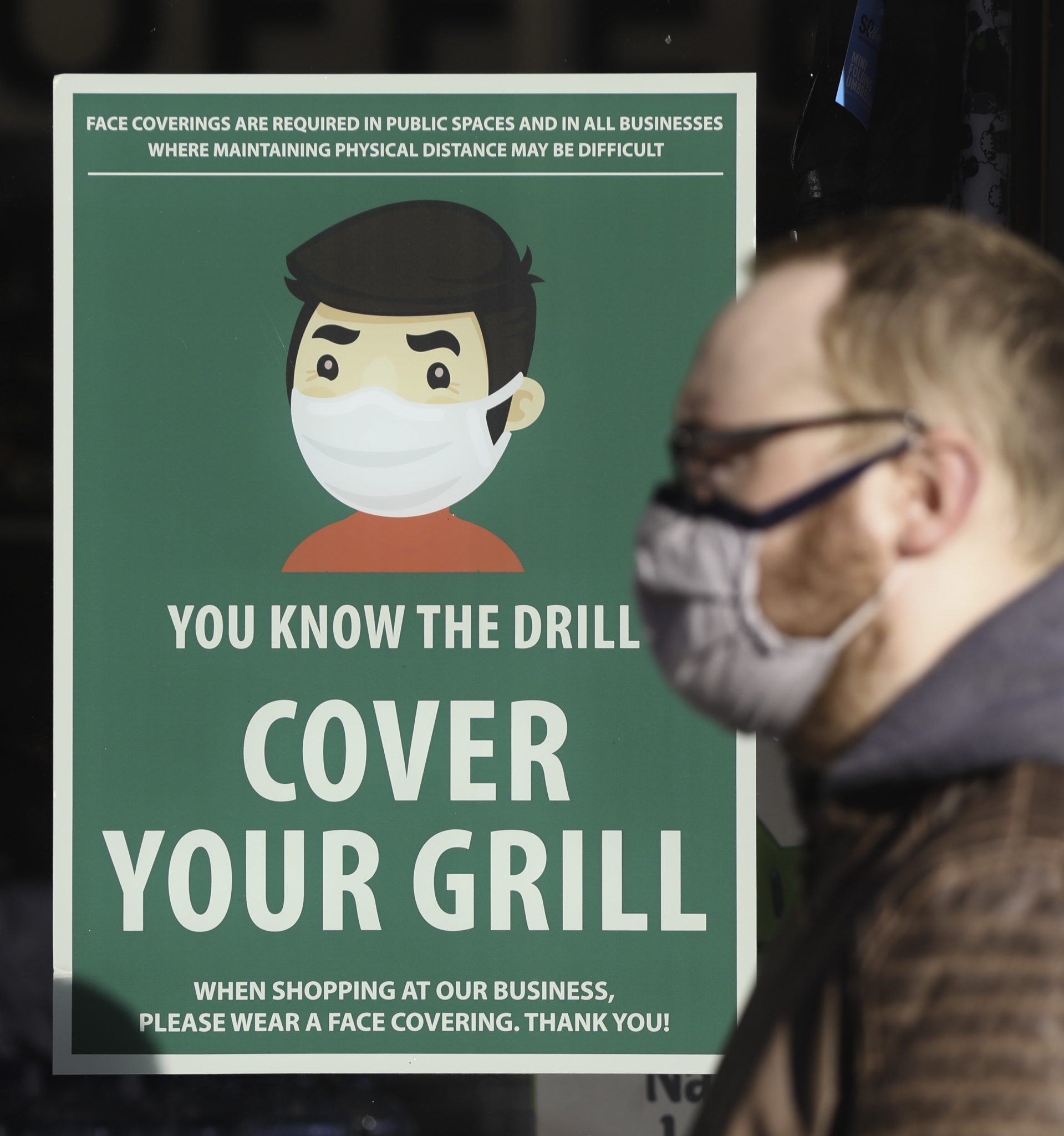 A man wearing a face mask in Dublin city centre as he passes a sign in a retailer window urging people to wear masks when entering the shop. Picture by: Leah Farrell/Rollingnews.ie

"They also provide much greater protection to yourself, than visors or shields do.

"Visors or shields really have no useful place, other than in protecting your eyes used in addition to a face mask. They're designed primarily for use in healthcare settings, because of splash-back episodes where viruses or other infected agents can get into your eyes", he said.

While earlier this month, Health Minister Stephen Donnelly said the issue around vaccines was not about supply but timing.

"We've advanced purchased about 18.5 million doses - it's enough to vaccinate every man, woman and child in the country twice.

"So the issue isn't so much around supply, the issue is timing. Everybody wants to get this vaccine as quickly as possible", he said. 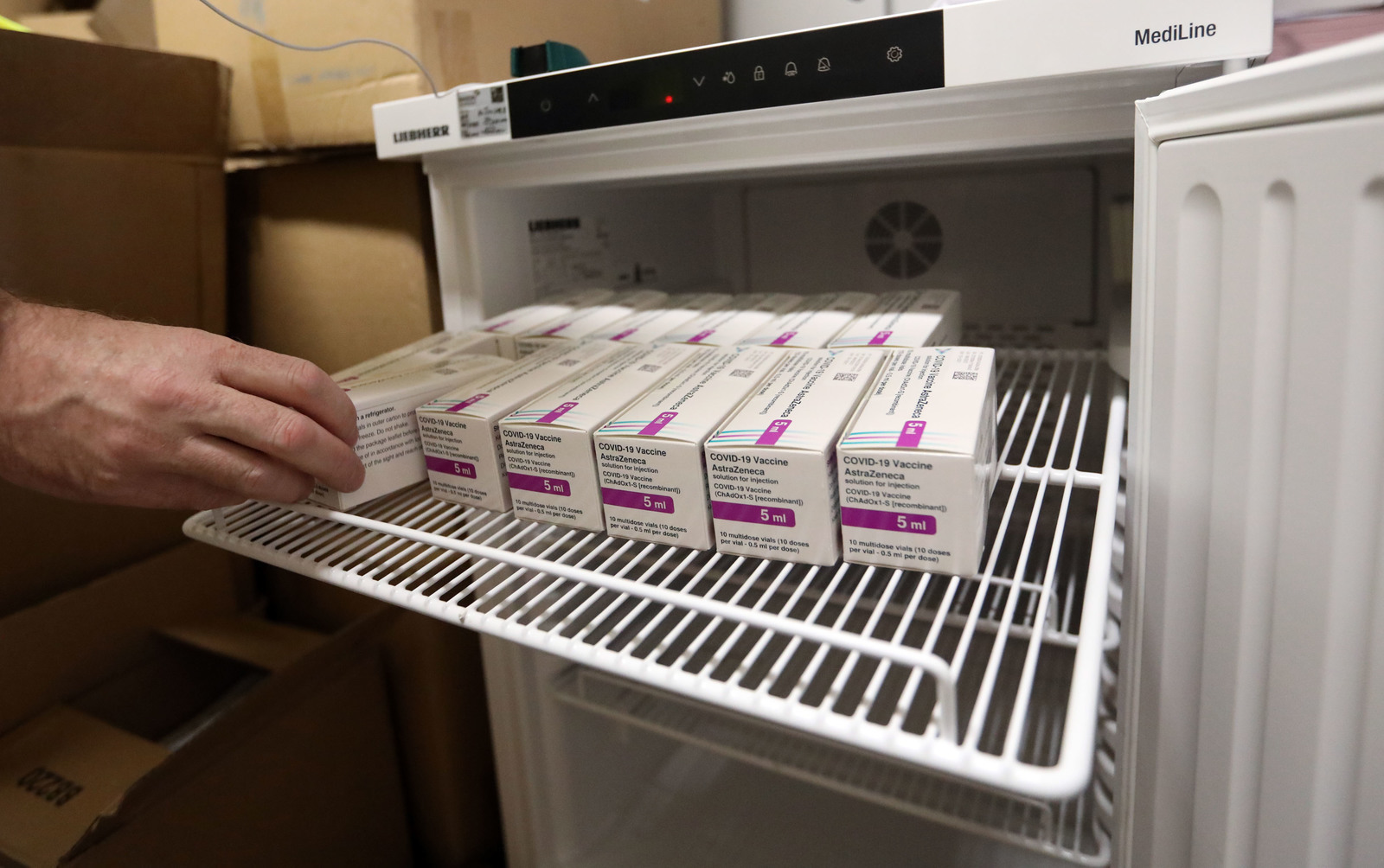 The AstraZeneca vaccine is seen in a fridge at St Mary's Hospital/Nursing Home in Dublin's Phoenix Park. Picture by: Sasko Lazarov/RollingNews.ie

This seemed to go against several other officials, who repeatedly claimed the main issue was supply.

HSE chief Paul Reid preciously said it was "bizarre" the HSE was facing criticism for missed vaccination targets when the problem was supply.

"Our confidence levels have been fairly rocked with them in terms of delivery and supply so that is an ongoing dialogue with them right now."

He said AstraZeneca's deliveries had been thousands of doses short at times.

"So, that is the environment in which we are trying to operate in and we are being held accountable for missing our targets, which is bizarre."

And it was only last week when Tánaiste Leo Varadkar told his parliamentary party that schools could remain closed well into April or May.

But on Friday, the Department of Education said all remaining secondary school students will return to school on April 12th.

"It is the intention of both Government and the Department of Education that all students will return to school from Monday 12th April.

"This is the final stage in the phased re-opening of all schools and will see the return of all children to in-school learning, including the first to fourth year groups at post-primary level", it said in a statement.

Main image: Members of the public wearing face masks as they pass a COVID-19 poster in Dublin city centre. Picture by: Sasko Lazarov/RollingNews.ie