Brazil appears to have backtracked on its rejection of G7 funds to fight the Amazon forest fires,...

Brazil appears to have backtracked on its rejection of G7 funds to fight the Amazon forest fires, saying it will accept as long as it has control over how the money is spent.

Presidential spokesman Rego Barros made the comments in an apparent attempt to smooth over a public spat between the Brazilian and French presidents.

Over the weekend, the G7 offered US$20m (€18m) in aid to battle wildfires which have been causing devastation in Brazil's Amazon basin.

On Tuesday, Brazil's President Jair Bolsonaro said he would only accept an offer of international aid if French leader Emmanuel Macron withdrew "insults".

Mr Macron has questioned Mr Bolsonaro's trustworthiness and commitment to protecting biodiversity, while Mr Bolsonaro has said his French counterpart has called him a liar, and accused him of questioning Brazil's sovereignty.

There now appears to have been a change of heart, with Mr Barros saying on Wednesday: "The Brazilian government, through its president, is open to receiving financial support from organisations and countries.

"This money, when it enters the country, will have the total governance of the Brazilian people." 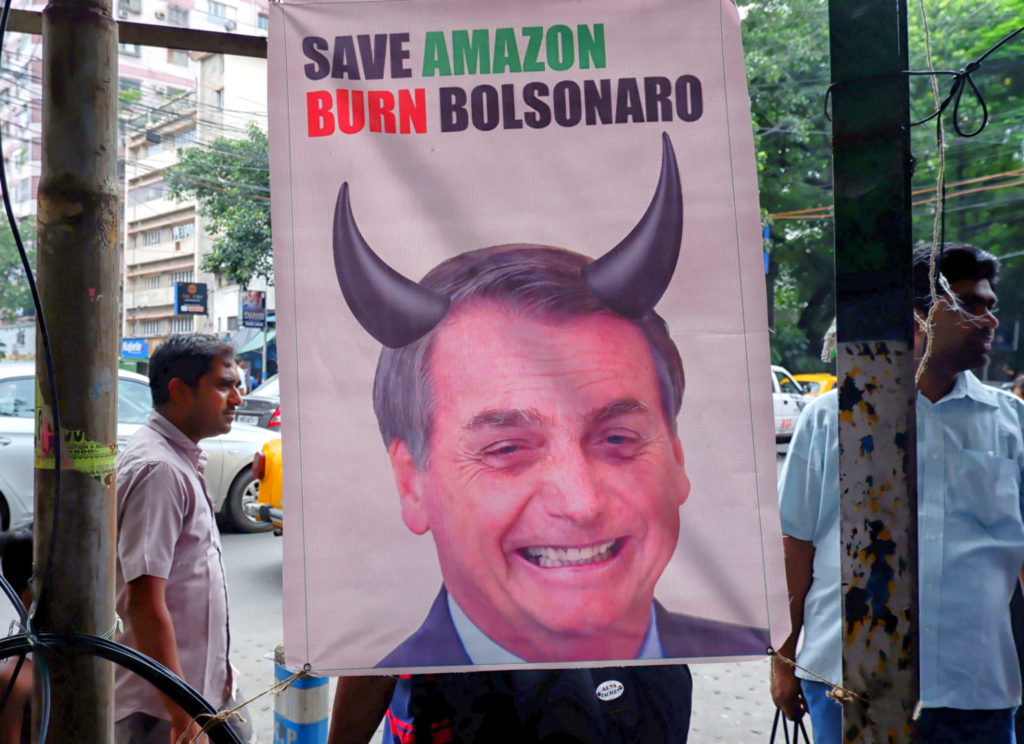 A banner of the Brazilian President Jair Bolsonaro hangs in front of the main road of a Brazil consulate during a protest in Kolkata, India | Image: SOPA Images/SIPA USA/PA Images

The number of fires in 2019 has increased by 80% in the year to date compared with the same period in 2018, according to data from Brazil's space agency INPE.

Brazil's reversal came as a congressional committee there approved a proposed constitutional amendment to allow commercial agriculture on indigenous reserves, a practice that is currently prohibited.

The proposal now has to go to a specially formed committee for consideration.

After passing through committee votes, a constitutional amendment must ultimately be approved by supermajorities in both houses of the Brazilian parliament.

The Amazon basin fires are not limited to Brazil, with neighbouring Bolivia also battling its own vast blazes which have charred an area nearly as large as Lebanon.

In Brazilian cities near to the areas where the forest fires are worst, lingering smoke has been causing health problems - particularly among children and the elderly.

"The kids are affected the most. They're coughing a lot," said Elane Diaz, a nurse in the Rondonia state capital of Porto Velho.

"They have problems breathing. I'm concerned because it affects their health."