Brazil's President Jair Bolsonaro says he will only accept an offer of international aid to fight...

Mr Bolsonaro said his French counterpart had called him a liar, and accused him of questioning Brazil's sovereignty.

It comes after Brazil's government said it would reject US$20m (€18m) in aid from G7 countries to battle wildfires in the Amazon.

Mr Bolsonaro told reporters: "First of all, Macron has to withdraw his insults. He called me a liar.

"Before we talk or accept anything from France... he must withdraw these words then we can talk.

"First he withdraws, then offers (aid), then I will answer."

Mr Bolsonaro and Mr Macron have been embroiled in a deeply personal and public war of words in recent days, with Brazil's president appearing to mock the French leader's wife on Facebook.

Mr Macron responded by saying it was "extremely disrespectful" and "sad".

The French president made the offer of financial aid for the Amazon at the recent G7 summit in Biarritz, after leaders had discussed fires ravaging the world's largest tropical rainforest - often dubbed "the lungs of the world".

The G7 nations have pledged the money to help fight the flames in the Amazon and protect the rainforest.

This is in addition to a separate pledges made by Canada and Britain.

Mr Bolsonaro, a right-wing leader who wants to open the Amazon to more farming and mining, had previously said the offer would leave his country like "a colony or no man's land".

The South American country has deployed nearly 45,000 troops to fight the fires with the government facing increasing outcry at home and abroad. 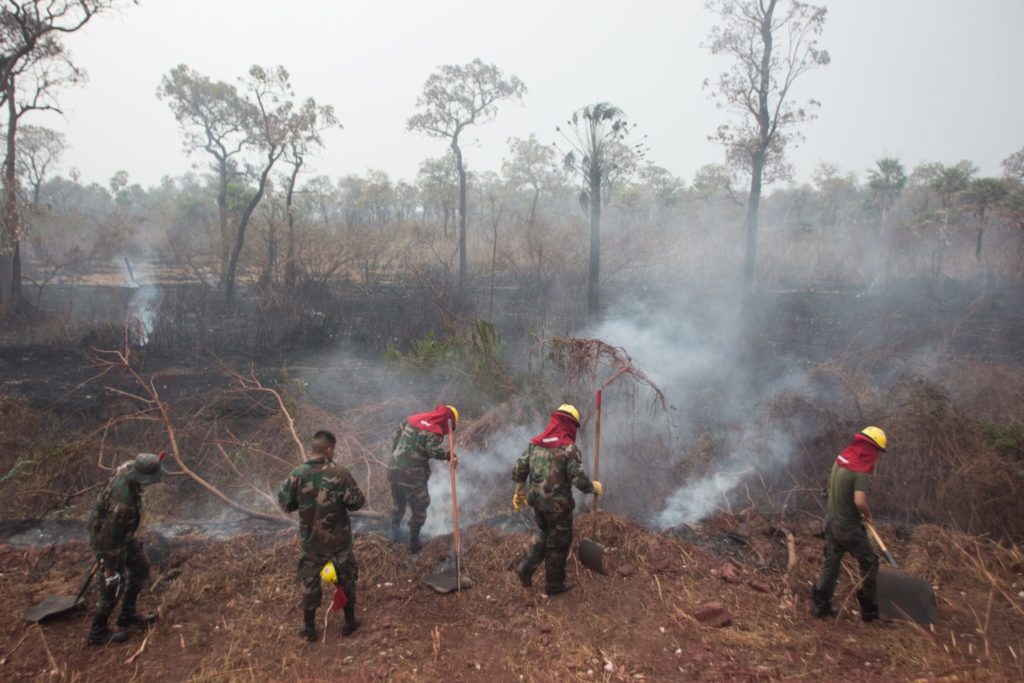 Firefighters work on a field after devastating a fire in the Amazon region | Image: Gaston Brito/DPA/PA Images

Fires are common during the dry season; however, Brazil has seen over 80,000 so far this year - 78% more than it did last year and the highest number since records began.

Just over half of these are in the Amazon.

In Brazil, the rise is being blamed on farmers deliberately setting fires to clear land for agriculture.

The military is working alongside local farmers to fight the fires.

President Bolsonaro has insisted he is not to blame for the crisis. and his Environment Minister Ricardo Salles is also deflecting the blame.

"We are making all efforts to take the necessary measures to combat the illicit environmental crimes in the Amazon region," he said.

"In addition we are collaborating with the agencies and state bodies who are primarily responsible for fighting the fires in each of the respective states."

On Friday, President Macron and the Taoiseach Leo Varadkar both warned that they would oppose the Mercosur-EU trade deal unless Brazil took action to stop the fires.

Ireland to co-chair International Committee of the Red Cross group