US President Joe Biden said the acquittal of Donald Trump in his impeachment trial was a reminder...

US President Joe Biden said the acquittal of Donald Trump in his impeachment trial was a reminder that democracy was "fragile".

The former president was found not guilty in his impeachment trial last night.

Although the final vote came in as 57 guilty and 43 not guilty, the Democrats did not reach the two-thirds majority they needed to secure a conviction.

Seven members of the Republican party joined Democrats on the charge of incitement.

The Republican Senate leader Mitch McConnell was among those who voted to acquit.

Speaking following the result, President Biden said: "While the final vote did not lead to a conviction, the substance of the charge is not in dispute.

"Even those opposed to the conviction, like Senate Minority Leader McConnell, believe Donald Trump was guilty of a 'disgraceful dereliction of duty' and 'practically and morally responsible for provoking' the violence unleashed on the Capitol.

.@LeaderMcConnell: "There is no question, none, that President Trump is practically and morally responsible for provoking the events of the day." pic.twitter.com/CznzAu3B0S

"This sad chapter in our history has reminded us that democracy is fragile. That it must always be defended. That we must be ever vigilant.

"That violence and extremism has no place in America. And that each of us has a duty and responsibility as Americans, and especially as leaders, to defend the truth and to defeat the lies."

Mr Trump had been charged with "incitement of insurrection" over last month's violence when the US Capitol was stormed by his supporters.

In a statement after the acquittal, Mr Trump said it was "a sad commentary on our times" that the Democrats had been given a "free pass to transform justice into a tool of political vengeance, and persecute, blacklist, cancel and suppress all people and viewpoints with whom or which they disagree". 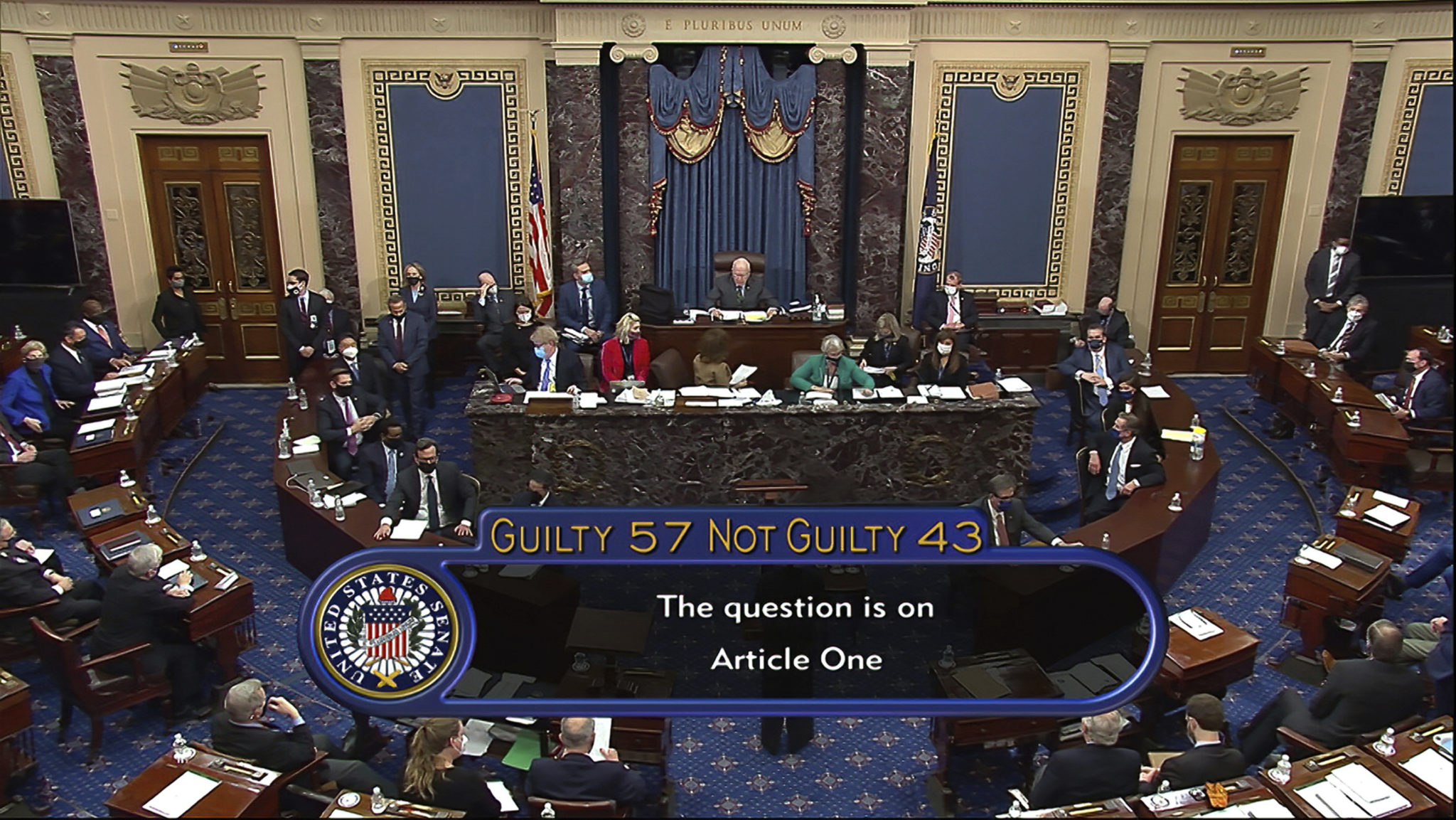 In this image from video, the final vote total of 57-43, to acquit former President Donald Trump of the impeachment charge, incitement of insurrection, in the Senate at the U.S. Capitol in Washington. Credit: Senate Television via AP

He said: "I always have, and always will, be a champion for the unwavering rule of law, the heroes of law enforcement, and the right of Americans to peacefully and honourably debate the issues of the day without malice and without hate."

Mr Trump is the only president to be impeached twice.

He added: "No president has ever gone through anything like it, and it continues because our opponents cannot forget the almost 75 million people, the highest number ever for a sitting president, who voted for us just a few short months ago."