Australia bushfires: A billion animals will have been killed, conservation group says

Up to one billion animals will have died in Australia's devastating bushfires and those who make ...

Australia bushfires: A billion animals will have been killed, conservation group says

Up to one billion animals will have died in Australia's devastating bushfires and those who make it through the flames could die in the coming weeks.

As the blazes rage across the country, Stuart Blanch of conservation organisation WWF Australia said mammals, birds, reptiles, bats, frogs and insects are all victims - and those who survive the infernos may still be doomed.

"Animals that make it through the fires will continue to die in the next weeks and months because of dehydration, starvation, disease and being easier prey for feral cats and foxes," he said.

"Nearly all of Australian wildlife is well-adapted to cope with normal bushfires - but this is not normal, this a climate emergency-driven bushfire catastrophe and a lot of our wildlife simply cannot get away from the fires - they're too fast, they're too big, they're too hot.

"So even animals that are not being burnt to death are cooked because of extreme temperatures, or they get very confused and lost because of the smoke haze so our animals don't stand a chance from these mass mega-fires that burn flames up to 200ft high."

He added: "We can keep exporting coal, or we can keep our wildlife - but we can't do both... otherwise, with even the best-managed national parks, our forests will continue to burn."

A state of emergency has been declared in the states of New South Wales and Victoria.

It has been estimated that over 480 million animals have been killed in the New South Wales bushfires since September.

This includes the death of thousands of koalas, with many more injured and countless others homeless.

The majority of koalas on Australia's east coast live within the 'Koala Triangle' - a region where the species could be extinct in as little as 30 years. 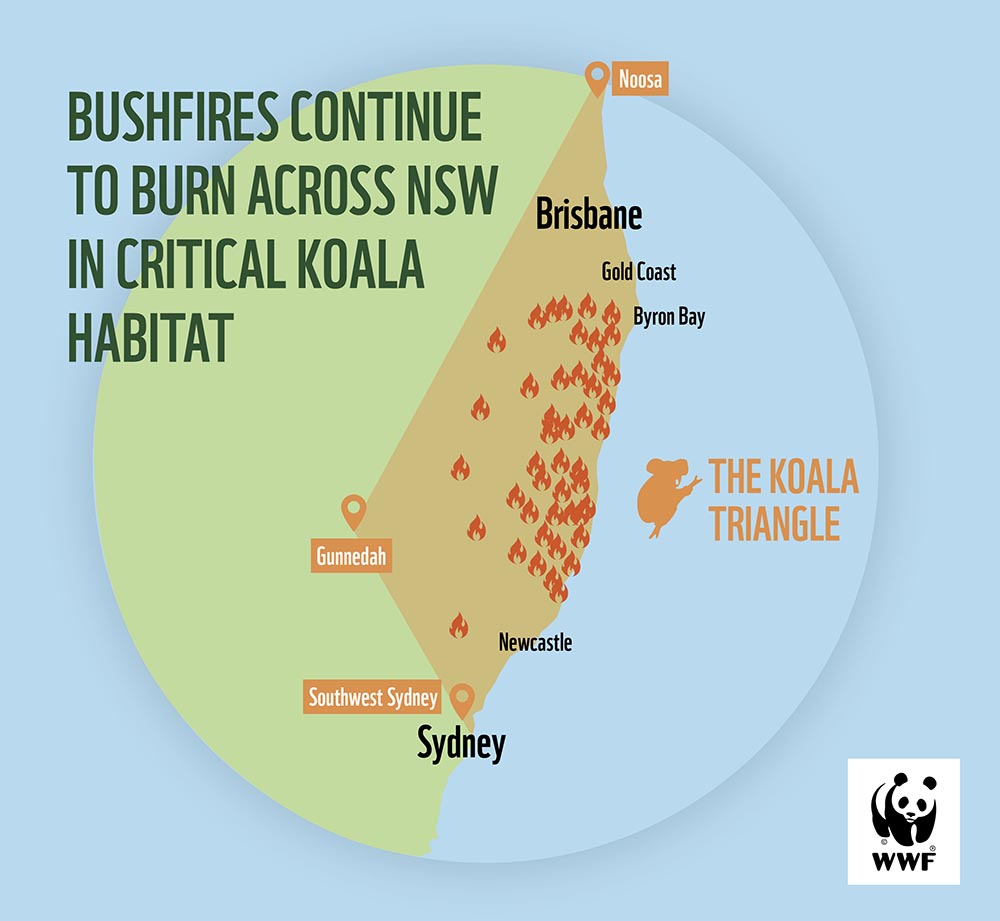 Fires are raging through this area, potentially accelerating this timeline.

Thousands of firefighters are battling to contain the blazes and many continue to burn out of control, threatening to wipe out rural townships and causing almost incalculable damage to property and wildlife.

Soaring temperatures and strong winds fanned fires in New South Wales, Victoria and South Australia on Saturday, forcing thousands to flee and bringing flames to the suburban fringes of Sydney.

The number of people killed has risen in the past 24 hours, with the latest death being a 47-year-old man who died while trying to defend a friend's home.

State police said he was found unconscious in a vehicle and could not be revived.

Earlier on Saturday, a father and son who were battling flames for two days died on a highway on Kangaroo Island, off South Australia state.

A total of 24 people have been killed and almost 2,000 homes destroyed as the bushfires have ravaged three Australian states.

On Sunday, a drop in temperature and rain showers has brought some hope of a respite from the flames.

Not all heroes wear capes

Meanwhile, the country's Prime Minister Scott Morrison told a news conference on Sunday: "It's been another difficult night across Australia, in particular in New South Wales and Victoria and in South Australia, with the confirmation of another life lost.

"While the weather conditions have improved, as you would have heard, as reported from New South Wales and Victoria, there are still many fires that are raging.

"And there is a very significant firefighting effort which is continuing.

"The better conditions today obviously will assist, but it is important to stress, as I've been advised, that the nature of those fires is still very strong.

"And it will take some time. And that will require a considerable amount of effort.

"And we absolutely understand that that is where the primary focus is, particularly of the fire commissioners as they are addressing that very urgent task."

The deadly fires, which have been raging since September, have already burned about five million hectares (12.35 million acres) of land.