The former communications director at the White House has described US President Donald Trump as ...

The former communications director at the White House has described US President Donald Trump as 'a dangerous guy'.

Anthony Scaramucci also said he made a mistake in supporting Mr Trump.

He fell out with President Trump after being sacked just 10 days into his role back in 2017.

Americans go to the polls on Tuesday November 3rd to choose between Mr Trump and Mr Biden.

While early voting has already reached record levels there.

Speaking to The Pat Kenny Show, Mr Scaramucci said Mr Trump would not still be in his job if he was a company CEO.

He explained: "If you step back - let's say the two of us were on a publicly-traded board of a company and we were searching for a CEO - and we selected Mr Trump and then you had this sort of activity go on for the last four years.

"And then if you looked at the bellicosity of his rhetoric - the bullying, the abrasion on Twitter, the way he handles Democratic leaders that are part of the post World War II, Western Alliance.

"You and I, we'd probably lose our board seats, or we would have to seek his removal.

"So to me, it's nothing personal to him.

"But I think it's time for America to move on - and I think he's a dangerous guy."

"He is suggesting to people in the United States, he suggested publicly, that it's not clear to him that he would accept a peaceful transfer of power."

'I did something stupid'

On his firing, Mr Scaramucci said: "I been very accountable for my firing.

"I did something stupid: I talked to a reporter I trusted, I said something off-colour about Steve Bannon - which you guys in Ireland would have enjoyed, because you've got a great sense of humour.

"Having said that, it wasn't appropriate for the public domain.

"The reporter chose to turn it into the public domain, I lost my job.

"I was fired for a reason, I did something fireable - I never blamed the president or General Kelly for that firing.

"However, if you're putting women and children in cages at the border - and we now learn that we have 545 children that cannot find their parents [and] may never see them again - you're denouncing the intelligence agents of the United States that have kept us safe after 9/11... you're decrying that the press is the enemy of the people - it's very hard to support. 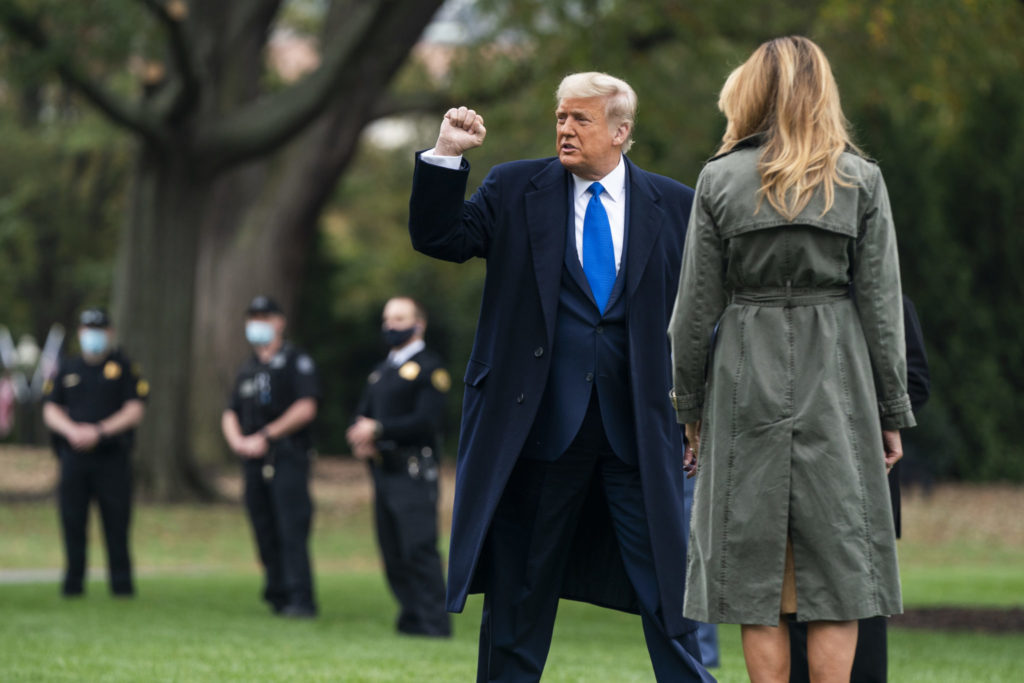 "But the last blow for me - cause remember I'm also from a family of immigrants like the Vice-President [Joe Biden] - the president suggested to the women of the squad, the four Congresswomen, three of which were born in the United States, one naturalised as a citizen, all four democratically elected to the Congress - different shades of colours, I might add - he said to the four of them 'Go back to the countries that you originally came from'.

"So they said that to my Italian-American grandparents 100 years ago.

"And as I told Mayor [Rudy] Giuliani: I'm not going to disavow my personal history in this country, my personal integrity to that extent to support Mr Trump."

Mr Scaramucci said his choices took a toll on him, and his marriage.

But he said things are better now: "I repaired my marriage, I think my marriage to Deirdre is stronger than ever.

"We were in the throws of that, she probably dislikes the president almost as much as Melania Trump dislikes him.

"Probably not quite that much, but certainly in that level.

"It was a difficult period of time, but here's the thing: you go forward and you do the best you can in life".

He said there is a lesson in his life for others: "I did put my pride and ego into my decision-making".

"I was intoxicated by the idea of working for the American president in the White House, and I was normalising Mr Trump.

"And I was doing that for my ego and my pride.

"What I would suggest to your listeners is when your pride and ego are involved in your decision-making, your intelligence is going lower and your emotions are going higher - it's a bad mix".

Earlier this year, Mr Scaramucci told Newstalk he believed Mr Trump would "lose" in the election, and predicted it would be a "humiliating loss".

Main image: Anthony Scaramucci listens as he is introduced in the White House in Washington, DC in July 2017. Picture by: Ron Sachs/DPA/PA Images