The final result announced by the Interior Ministry saw Mr Macron get 58.54% of the vote, compared with Ms Le Pen's 41.46%.

Cheers erupted at the foot of the Eiffel Tower where supporters of the president celebrated his re-election on Sunday. 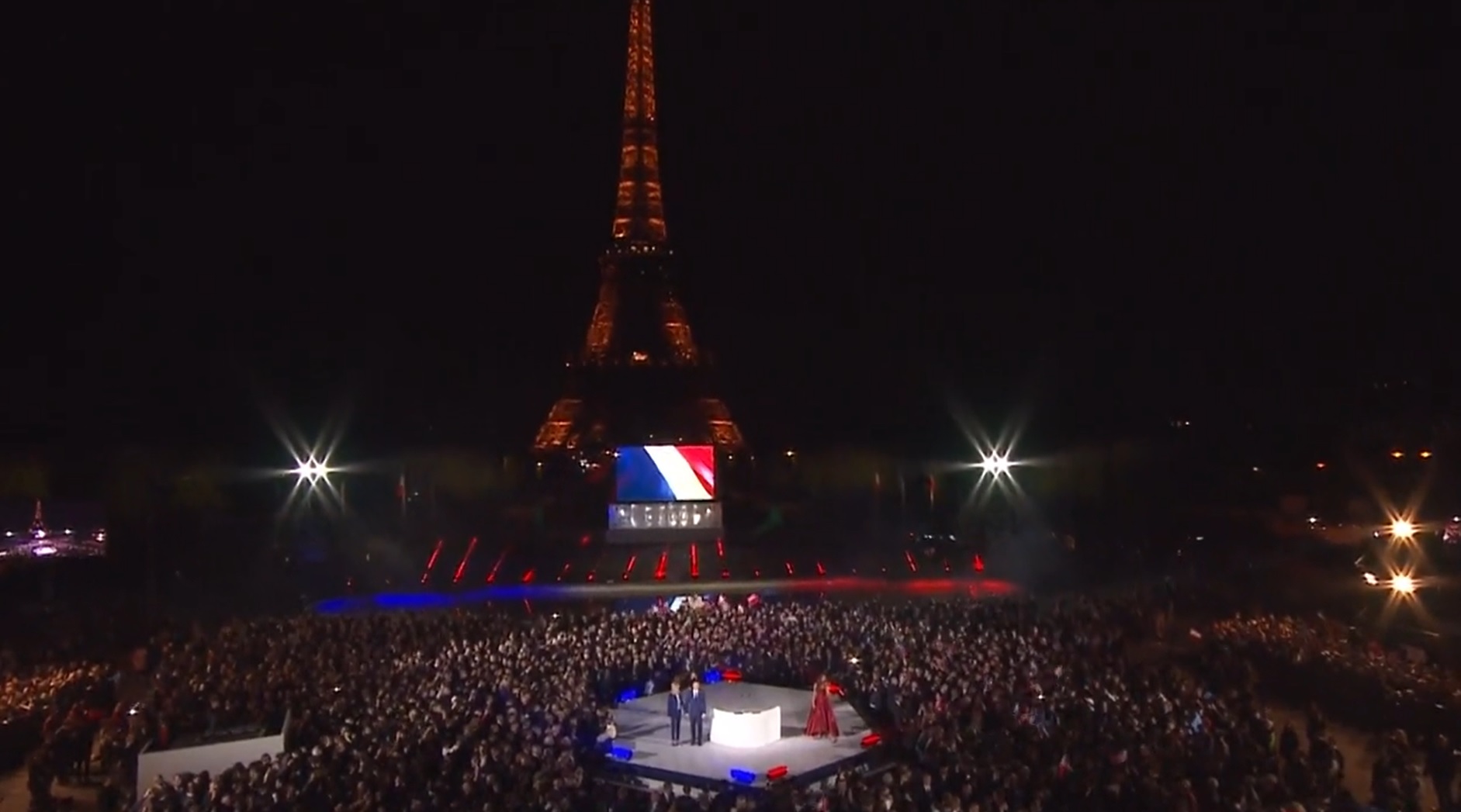 Crowds gather at the Eiffel Tower in Paris, as Emmanuel Macron claimed victory on Sunday. Picture via @EmmanuelMacron on Twitter

And in his victory speech, Mr Macron said he will be "president for all of us" in France.

"Many of our compatriots voted for me not out of support for my ideas but to block those of the extreme right.

"I want to thank them and I know that I have a duty towards them in the years to come.

"We will have to be benevolent and respectful because our country is riddled with so many doubts, so many divisions.

"No one will be left by the wayside. It will be up to us to work together to achieve this unity which will enable us to live happier lives in France.

"The years to come will certainly not be quiet, but they will be historic", he said.

Boos and whistles broke out at the campaign party of his challenger before she conceded defeat.

"Tonight's result is in itself an earth-shattering victory (for us)," she told her supporters.

"I fear that the five-year term that is about to begin will not break with the brutal methods of the previous one. 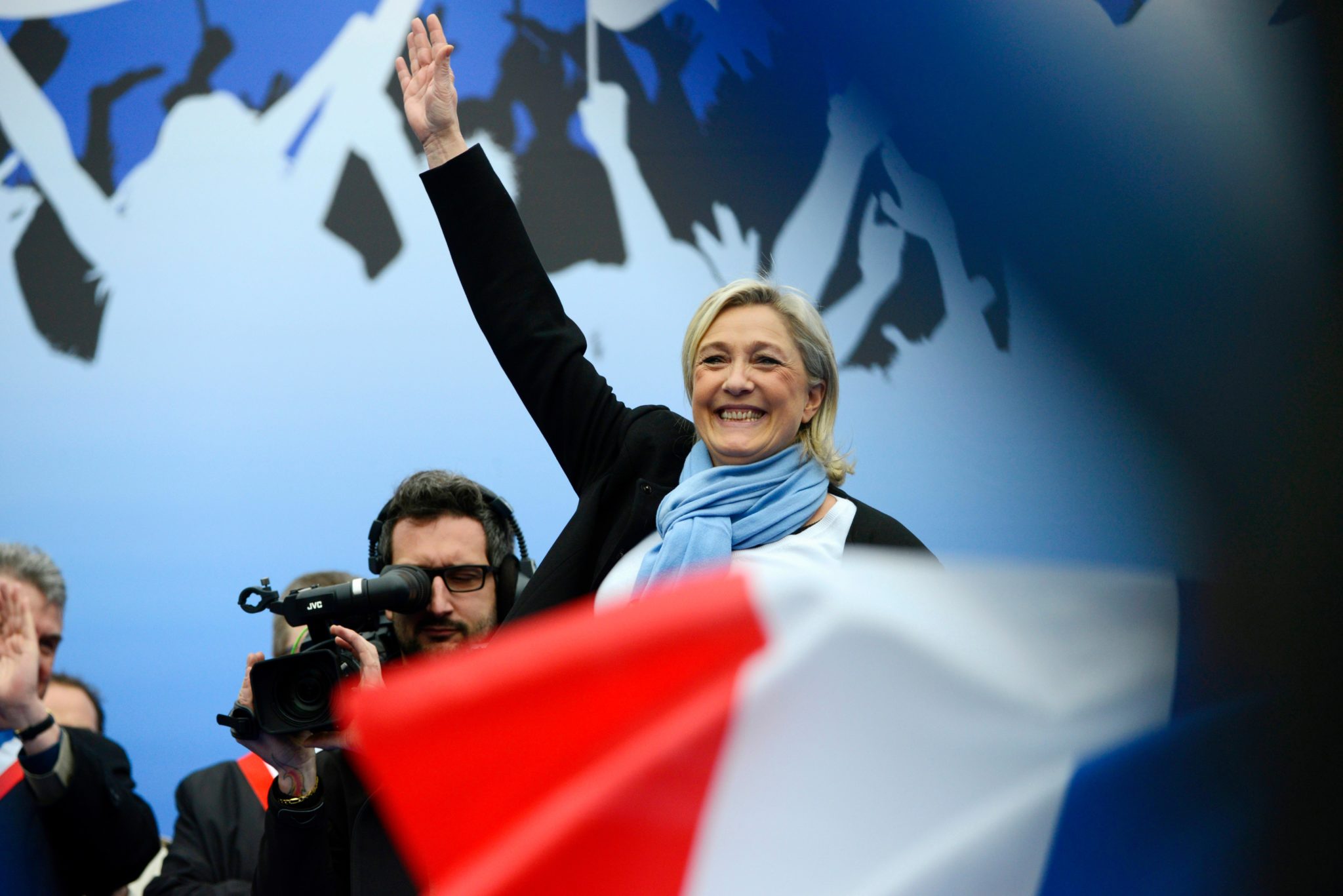 "In order to avoid the monopolisation of power by a few, more than ever I will pursue my commitment to France and the French people with the energy, perseverance and affection that you know me for."

Taoiseach Micheál Martin congratulated Mr Macron, and said he looks forward to "continuing to work together on the challenges ahead".

Congratulations @EmmanuelMacron on your re-election as President of France.

Your principled and dynamic leadership is important not only for France, but for Europe.

I look forward to us continuing to work together on the challenges ahead. pic.twitter.com/krXJx0Z8zK

In a statement, Mr Martin said: "At a time when Europe faces many challenges, not least the war in Ukraine, it is important that we have a president in Paris who is as committed as he is to the fundamental values of the European Union and to its success.

"Throughout his first term in office, he has offered strong, decisive and principled leadership.

"I very much look forward to this continuing and to working closely with him in the coming years."

He added: "Most importantly, France and Ireland are strongly committed to the success of the European project which remains the bedrock of prosperity and well-being on our continent.

"With crisis on our borders, it is has never been more vital that we remain a beacon of democracy and of hope in our neighbourhood and to the world".

Foreign Affairs Minister Simon Coveney called it a "victory for Europe", adding that France is "our closest neighbour in the EU".

US President Joe Biden said he looked forward to continued close cooperation between the two countries "including on supporting Ukraine, defending democracy, and countering climate change".

Congratulations to @EmmanuelMacron on his re-election. France is our oldest ally and a key partner in addressing global challenges. I look forward to our continued close cooperation — including on supporting Ukraine, defending democracy, and countering climate change.

"I appreciate his support and I am convinced that we are moving forward together towards new common victories. Towards a strong and united Europe", he said.

Congratulations to @EmmanuelMacron on your re-election as President of France. France is one of our closest and most important allies. I look forward to continuing to work together on the issues which matter most to our two countries and to the world.

Police sought to break up a crowd of mostly young people who had gathered to protest to result.

Mr Macron's next hurdle is only a few weeks away.

Parliamentary elections in June will define the make-up of the government Mr Macron must rely on to see through reform plans that would be an unprecedented shake-up of France's welfare state.

Newly-elected presidents can usually expect to get a majority in parliament whenever legislative elections directly follow the presidential vote, because of the generally low turnout among supporters of all the defeated candidates.

Main image: Emmanuel Macron is seen in Berlin, Germany in May 2017. Picture by: 360b / Alamy Stock Photo