An infectious diseases expert says any flouting of public health guidelines today could undo a lo...

An infectious diseases expert says any flouting of public health guidelines today could undo a lot of our hard work to suppress the spread of COVID-19.

It comes as 18 further deaths related to coronavirus and 349 new cases were reported yesterday.

355 people are currently being treated in hospital for the virus, an increase of 13 in the past 24 hours.

The number of people in ICU remains unchanged over the same period at 85.

Professor Sam McConkey from the Royal College of Surgeons is warning against people gathering with others outside their household for St Patrick's Day.

To assess where the country is now in terms of the disease, he said it is helpful to think back to the end of November and the beginning of December last year.

"We were having about 200 or 300 new cases of COVID every day diagnosed, now we're up at 300 or 400 a day, so we're not even in as good a place at the end of November," Professor McConkey told Newstalk Breakfast.

"We know when we opened up at the beginning of December, when we did a lot of socialising and we did some inter-generational gatherings, that was when numbers skyrocketed after just about three weeks of socialising.

"So this is an unstable place, where we're at now is not a stable place to open up and do things." 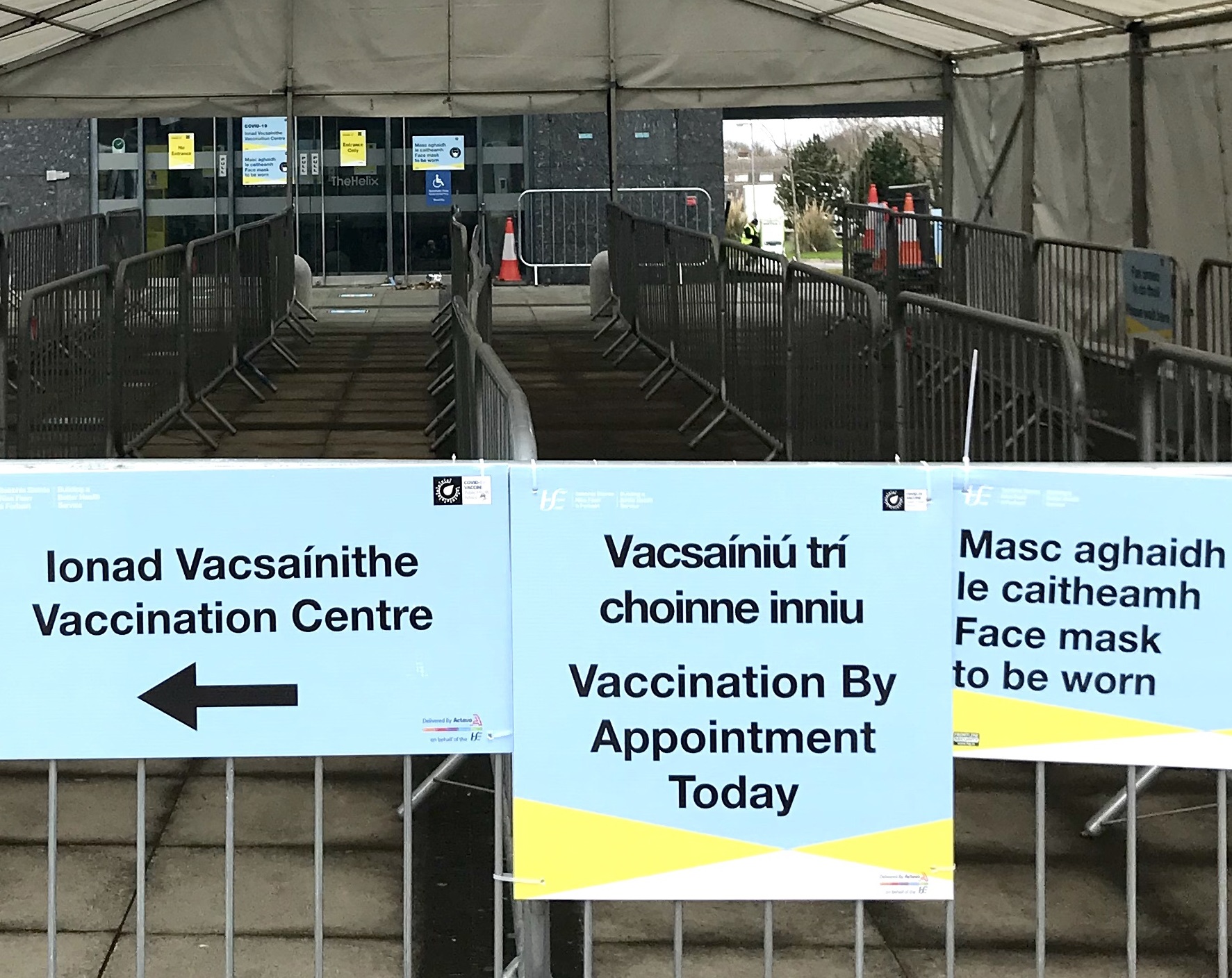 A vaccination centre entrance outside the Helix Theatre in Dublin. Picture by: Leon Farrell/RollingNews.ie

Professor McConkey believes what will help move Ireland into a better place with coronavirus will be getting the majority of the population vaccinated and investing in public health here, such as identifying and managing outbreaks in the community.

"So once we can shift the restrictions away from the whole population of five million of us into the local areas where there are outbreaks, then that will make life that much easier for the majority of people where there is no outbreak," he said.

"I think those are the two things that I think will get us out of this and get us through to hopefully a much better summer.

Meanwhile, a major Garda operation is under way across the country to ensure people adhere to COVID-19 restrictions this St Patrick's Day.

Professor McConkey said the numbers are still too high to allow for gatherings and warned people against meeting in groups with others outside your household bubble today.

"Obviously going outside is good, it's nice weather and it looks like it's going to be a great day, so going outside and doing the exercise is grand," he said.

"And certainly going with people you live with in a group is absolutely fantastic, that's what we should be doing, doing things outdoors with the people we live with and enjoy being with.

"So it's the groups meeting with others who they don't live with is the big issue, especially if it gets up close and personal and intimate and large crowds, that's how this virus likes to spread.

"The pint isn't the problem, it's actually the physical proximity and the closeness to people you don't live with."