Conor McManus charts how the blanket was beaten

There's no doubt that Conor McManus has been one of the leading forwards in the country for the l...

Conor McManus charts how the blanket was beaten

There's no doubt that Conor McManus has been one of the leading forwards in the country for the last few years.

In an era when Monaghan have earned renewed prominence at Ulster and All-Ireland level, the 32-year-old has been key.

But how did his evolution take him into the elite bracket of forwards?

The Clontibret O'Neills clubman spoke to Ger Gilroy and touched on his own rise.

"It's funny I actually started in the half-back line with the club in 2005-6. But I probably hadn't developed physically enough to be in the inside line," he said of those early years.

"When you were in the half-back line, you could come onto the end of plays. But it just transitioned from there. I got called into the senior team on the back of club performances."

McManus had played in the forward line in his earliest years and eventually relocated himself away from the back from 2008.

"It was in 2013 when I felt I made my mark really and felt you were playing close to what you could play," he explained.

"There were flashes of it over the previous couple of years. But you never consistently put it together on bigger days."

But how did Conor McManus find that level of consistency to thrive at the very top level? Malachy O'Rourke's arrival as Monaghan manager did play a part. 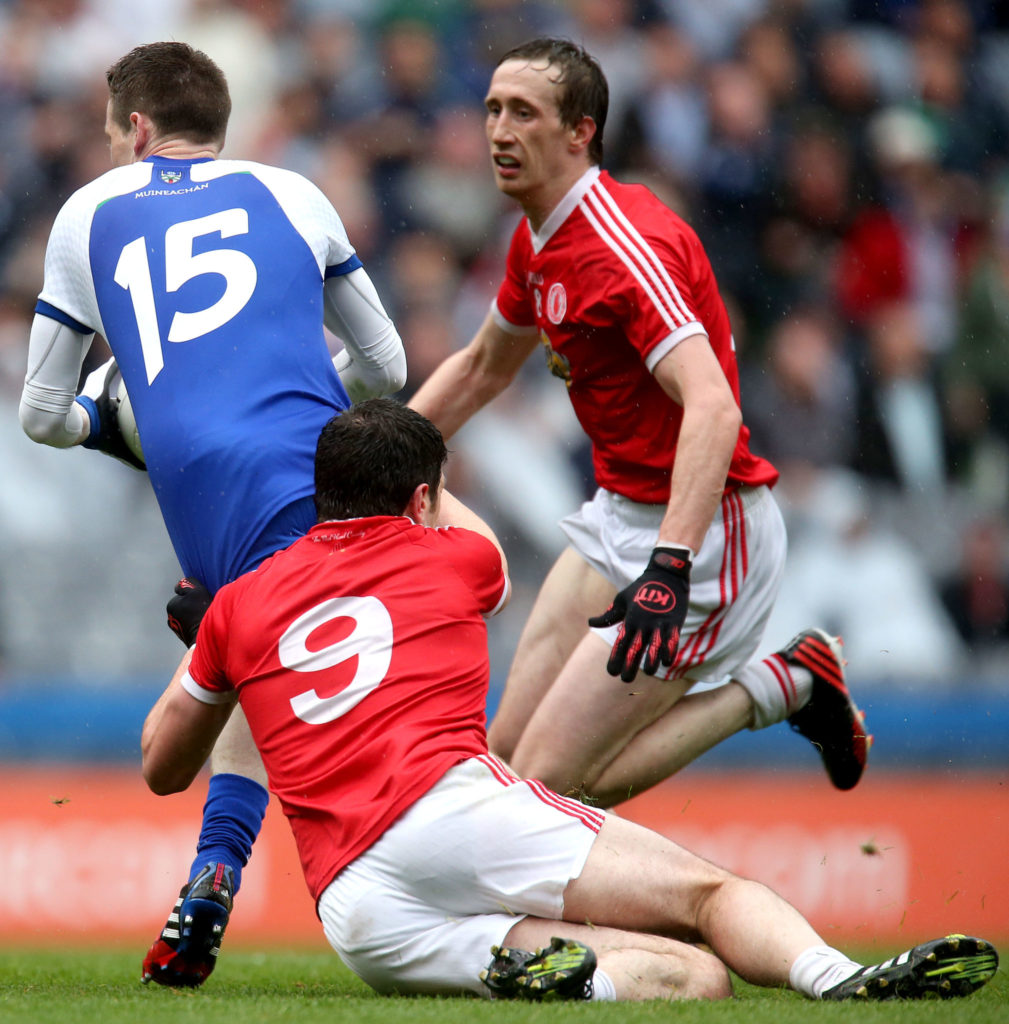 "It was just a case of, 'Work as hard as you can'. Physically I'd developed a wee bit more and physically stronger. You were probably more able for that rough and tumble inside that you're going to get.

"So it just sort of evolved from there. You put your head down and you worked hard. The league football and playing regularly in the National League and getting them games under your belt... when you're doing that week in, week out, regardless of what division it is, you start to garner a bit of confidence from that.

"You carry that into the summer and when you do it on the bigger days in the Championship, it feeds on from there."

He also gave an insight into his development as a corner forward through the blanket defence era.

"Football became a bit more methodical in the way you broke teams down," said McManus.

"Looking up and checking to see if [an opportunity] is on isn't an option. For years there, with sweepers and blankets, you were programmed to go sideways. And even to get the chin up to look to see what was there wasn't an option at times. The tendency was to run it rather than look up to see if something was on because there were two or three sweepers there. Nine times out of ten it wasn't the right option. But that was just the way football went. The Monaghan team was no different to the Mayo team or the Kerry team or Donegal. It was just the way it was. So you had to figure your way out and figure your way around it."

He identified the change away from pure blankets from when "attacking teams started winning again".

"Donegal brought a certain style of football to the country and were successful at it. It was up to teams to figure out how to beat it," said McManus.

"It took a while for that to happen and it took a lot of time and a lot of coaching. But now look at Donegal themselves. They're probably one of the best attacking teams in the country at the minute. They're racking up huge scores every day they go out."

He added that "because Dublin are so dominant, it's probably forced everybody's hand" to come out of their defensive shells.

"There's openly more of an emphasis on attacking than there is defending," the Monaghan forward added.

"Time was you'd defend your way to a win. But again, that system has come and gone."

You can watch the full interview with Conor McManus above via our YouTube channel.

Conor McManus was speaking as part of AIB’s launch of their online video game, The Toughest Journey. Previously restricted to playing as a single user, ‘Battle Mode’ will allow game players to go head-to-head in real time.