Liam Sheedy's Tipperary have won the 2019 All-Ireland Senior hurling championship, after a clinic...

Liam Sheedy's Tipperary have won the 2019 All-Ireland Senior hurling championship, after a clinical second-half display saw them beat Kilkenny by 14 points, on a 3-25 to 0-20 scoreline.

Kilkenny had gone down to 14 men in the closing stages of the first half. Richie Hogan received his marching orders after a straight red card for a high elbow on Cathal Barrett, which referee James Owens deemed to be dangerous.

It was Brian Cody's Kilkenny that started the brighter, and they were 0-8 to 0-3 up on 21 minutes.

A goal from Niall O'Meara drew Tipp level though twenty-five minutes into the game - his shot after great work out the field from Paudie Maher gave Eoin Murphy no chance in the Kilkenny goal.

The sides traded scores before a Noel McGrath free put Tipp a point up at the interval - Tipperary 1-9 Kilkenny 0-11.

That was after former Hurler of the Year Hogan had been sent off, a decision which turned out to be a crucial point in this at times frenetic final, played in wet conditions in the first half. 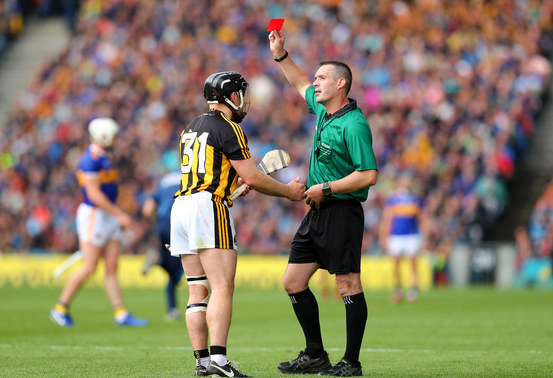 Seamie Callanan bagged a second goal for Tipperary early in the second half, his second green flag of the championship.

His performance will have only added to the arguments concerning Callanan and the Hurler of the Year gong. Rival TJ Reid hit eleven points for Kilkenny this afternoon, with ten of those coming from placed balls.

Silvermines star Jason Forde was the danger man from set-pieces for Tipp - he hit eight points in all, with one of those from play.

Tipperary substitute Willie Connors added a couple of fine scores late on to put the gloss on the scoreline and in the end the 14 -point deficit put paid to any doubt as to the team deserving of the win.

In the curtain-raiser, Galway clinched their third Electric Ireland Minor All-Ireland in a row with a devastating display against Kilkenny.

It was a repeat of last year's decider, with the Tribes eventually winning out by eleven points, 3-14 to 0-12.

Mountbellew's Seán McDonagh was Man of the Match and top-scored with 2-8, including 1-1 from play.