'If the players are happy, I'm happy' | Giovagnoli on stadium row

Dundalk manager Filippo Giovagnoli avoided the opportunity to get dragged into the stadium contro...

'If the players are happy, I'm happy' | Giovagnoli on stadium row

Dundalk manager Filippo Giovagnoli avoided the opportunity to get dragged into the stadium controversy on the eve of his first Europa League campaign.

Some of his squad have been here before and played their last three group matches in 2016 at Tallaght Stadium where they receive Norwegian champions Molde tomorrow night (k/o 5.00pm).

It could have been the Aviva Stadium but the IRFU needed the ground on Lansdowne Road for a kicking practice session ahead of their Six Nations match against Italy on Saturday afternoon, something that displeased the Dundalk chairman, Bill Hulsizer.

For now, it's Dublin 24 but the Dublin 4 venue is set to host the Lilywhites' home matches against Arsenal at the end of the month and Rapid Vienna next month, and the Italian seemed unconcerned about the issue.

"I know that it was important for the club to play there," said Giovagnoli.

"For me, to be honest, it’s no difference. I know my players are happy to play here so if they are happy and feel comfortable to play in this stadium, I’m happy too." 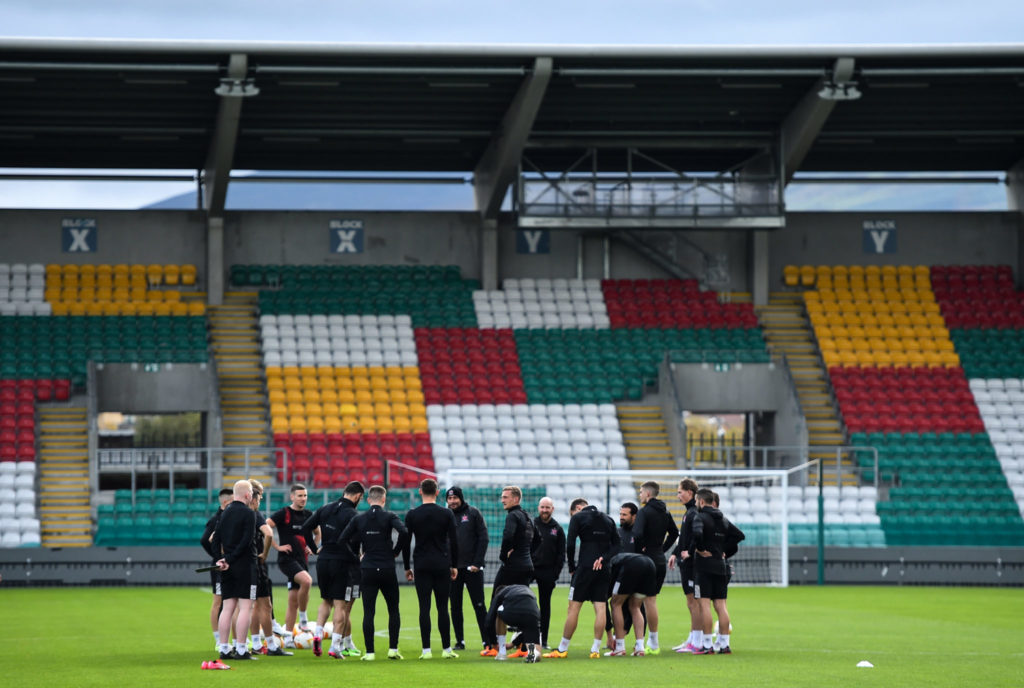 Dundalk captain Chris Shields chuckles at the suggestion that the pitch at Tallaght is a bit smaller than the one at the Aviva Stadium.

"This pitch is big but a big pitch always suits us for our style of play," said Shields.

"Maybe if we look back at the performance against KI [Klaksvik], a few lads would have admitted it was their first time in a situation like that.

"There might have been some nerves about it but that's a good thing to have under the belt now going into these group stages.

"We're going to come up against teams on big expansive pitches wherever we play. Whether it be the Aviva, the Emirates or in Norway or Austria.

"Big pitches suit us, it's about how we combat how it suits the other teams."

Giovagnoli also referenced the players and their state of mind in the pressure cooker-like situation of the play-off final match against the Faroese at the start of the month.

The manager expects to see his players approach the group matches in a more relaxed frame of mind.

"We had a problem with this in the play-off when we played KI [Klaksvik] but for them it was a big thing, the play-off, to get to this stage," said Giovagnoli.

"Now I think we're going to perform. We are more relaxed, we have nothing to lose. We have just to do well and show that we can compete at this level."