Dublin manager Jim Gavin was full of praise for his captain and goalkeeper Stephen Cluxton after ...

Dublin manager Jim Gavin was full of praise for his captain and goalkeeper Stephen Cluxton after yesterday's 1-18 to 0-15 victory over Kerry to secure the five-in-a-row.

It's the seventh time Cluxtin has lifted Sam Maguire with his county - and sixth time as captain for the man who has now made 106 appearances for the capital side.

Gavin says the work his goalkeeping team put in pays off on days like yesterday evening in Croke Park.

"I've seen him do it before, I saw it earlier on this week. I saw him, Evan Comerford and Michael Shields from St Sylvester's spending two hours on the field with the goalkeeping coach."

The Dublin boss also said Cluxton was keen to amend aspects of his game from the draw at Croke Park two weeks ago.

"They were working on rectifying his position for Killian Spillan's goal the first day. That's someone who is dedicated to their craft.

"The result of that is what you see in those clutch moments, to have that composure to make himself big and strong and do his job. That's what Stephen does - he does his job." 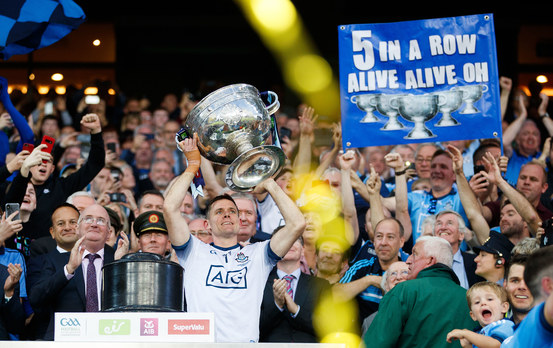 Gavin also said Cluxton had been availing of slow-motion clips on the laptop to analyse his own foot position from the draw with Kerry the first day.

"Through that example, he inspires people around him. Stephen is well able to talk - he's very articulate and people listen. But how he demonstrates is through actions, he's a doer.

When asked if the 37-year-old Parnells man will stay on with the side next year, Gavin hinted he would expect so.

"I don't see any reason why not. These are all [the] players choices. It is a big commitment, I'm not saying it's any different to any sport. They all have to commit time..."

The Dublin boss was also asked about his own future in charge but was coy as he hinted he was keen to stay on himself.