Novak Djokovic recovered from two sets down against Stefanos Tsitsipas in Sunday's French Open final and becomes the first man in the Open Era to win every Grand Slam at least twice.

World no.1 Novak Djokovic has won his second Roland-Garros and 19th Grand Slam title, putting him just one behind Rafael Nadal and Roger Federer's all-time joint toll of 20, by defeating Greek superstar Stefanos Tsitsipas 6-7, 2-6, 6-3, 6-2, 6-4 in an epic men's decider on a sun-drenched Court Philippe-Chatrier.

This was the first time Djokovic came from two sets down in the 29 Grand Slam finals he has contested. It was the first men's final to reach a deciding set in 17 years when Gaston Gaudio beat Guillermo Coria the year before Nadal made his bow on the Paris clay and a new era commenced.

Djokovic looked exhausted in the opening two sets after Friday night's thrilling semi-final victory against Nadal in a match already regarded as one of the greatest ever battled up there with the iconic 2008 Wimbledon final between Nadal and Federer.

Tsitsipas himself endured an epic in the other semi-final, blowing a two-set lead against Alexander Zverev before taking it in the fifth. The 22-year-old could not, however, repeat such heroics against a stoic Djokovic on Sunday.

Djokovic, 34, is now just one Grand Slam championship behind both Nadal and Federer and will be favourite to surpass both men later this summer at Wimbledon and the US Open.

If he does so, Djokovic will be top of the mountain on 21. Since 2014 Djokovic has won 50 percent of all Grand Slams available.

Djokovic edged that epic on a tiebreak and took the fourth set handily meaning he was the first man in history to beat Nadal after the legendary Spaniard won the opening set here. That was just the third time that Nadal had lost a Roland-Garros match since making his debut 16 years ago.

The first was in the 2009 fourth-round against Robin Soderling who went on to lose that final to Federer, and the other was in 2015, when Djokovic shaded their quarter-final only to fall short in the final against Stan Wawrinka. Djokovic won his only French Open title until this weekend the following year when Nadal pulled out injured in the early rounds of 2016 and Djokovic beat Andy Murray in the showpiece.

So, here we were on Sunday. Djokovic having taken care of Nadal in the last four - the only man to do so. The assumption was that Tsitsipas would therefore not stand a chance. Djokovic enjoyed a 5-2 head-to-head record against the 2019 ATP Finals champion heading into this final, including all three of their previous clay encounters.

However, Tsitsipas did take Djokovic to a deciding set in the 2020 French Open semi-final after going two sets behind, so he knew he had the game to trouble the Serb.

And so that proved to the case in the opening two sets here. 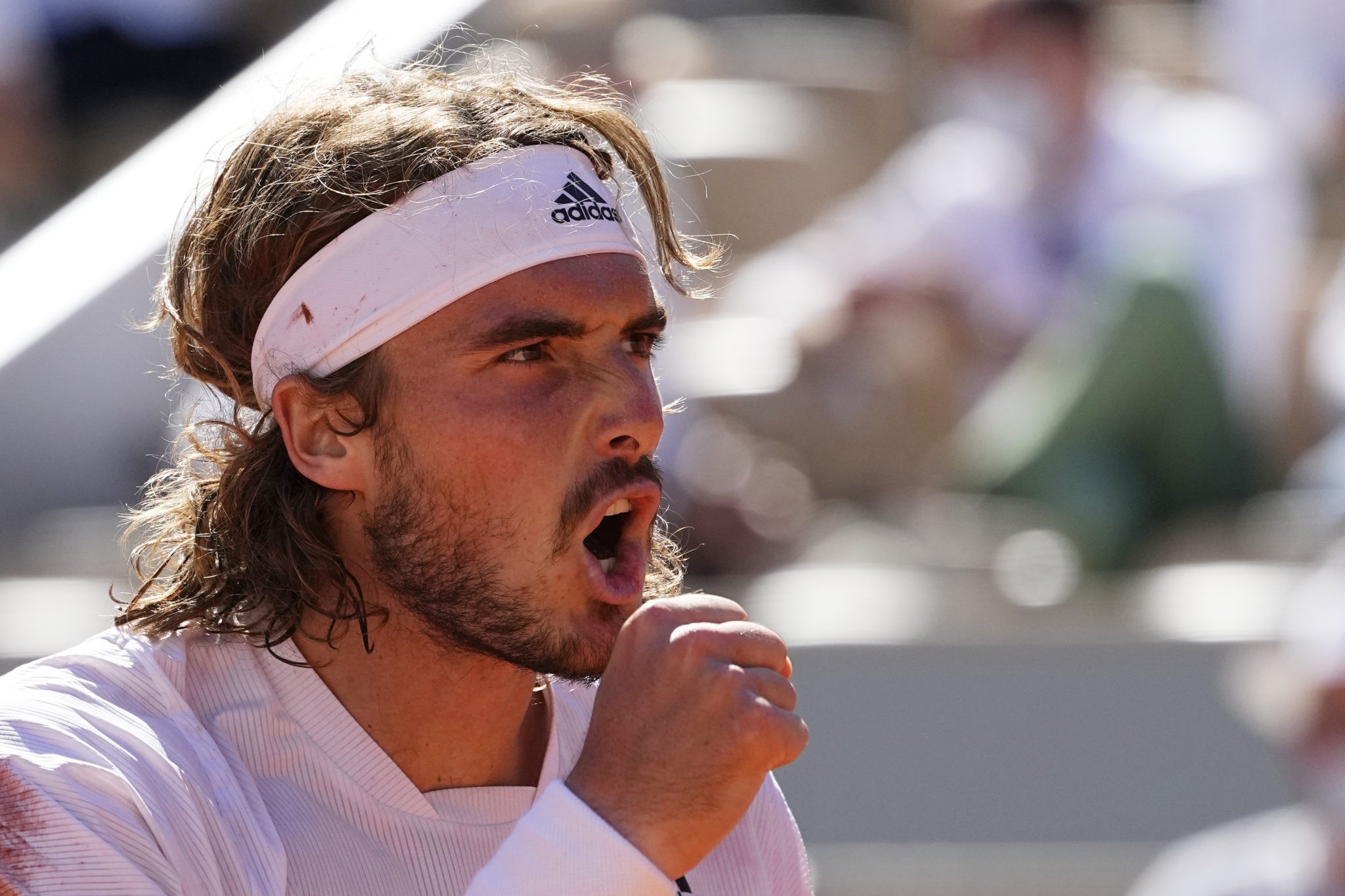 Stefanos Tsitsipas of Greece reacts as he plays Serbia's Novak Djokovic during their final match of the French Open tennis tournament at the Roland Garros stadium Sunday, June 13, 2021 in Paris. (AP Photo/Michel Euler)

Like Barbora Krejcikova in her eventual victory on Saturday, Tsitsipas served first, looked nervous, and faced a couple of break points. The opening game took nearly eight minutes as Djokovic's famous return-of-serve was in ominous form.

Tsitsipas grew into it quickly though, holding serve with increasing ease leading 5-0 on the aces front midway through the first set. Djokovic was winning 100% of his first service points by the same stage as, for the only time in the entire showdown, each player was performing simultaneously.

That changed when the drama arrived at 3-3 in the opener. For the second time in three matches, Djokovic took a fall on the unforgiving clay (as he did against Matteo Berrettini in the quarter-final) and did not look quite right afterward. This led to a set point for Tsistipas on Djokovic's serve at 4-5 which resulted in a 20-odd shot rally of the highest quality in which Djokovic prevailed.

He held, and just moments later broke Tsitsipas after the Greek first hit long and then struck wide. At 6-5, it appeared that Djokovic would serve it out only for Tsitsipas to immediately break back, taking the first set into a tiebreak where he raced into a 4-0 lead.

That was when Tsitsipas tumbled to the ground attempting to chase a rare net volley winner by his opponent. Djokovic quickly levelled the scores and at 6-5, had his own set point which Tsitsipas fantastically saved with a reflexive forehand winner down the line. Djokovic acknowledged the ingenuity with an appreciative nod as the pair changed ends.

Tsitsipas backed that terrific shot up by winning the next three points and taking the first set tiebreak 8-6 as Djokovic hit wide left. He was imperious by now and easily broke Djokovic in the first game of the second set.

Enjoying a 20-16 winners advantage, Tsitsipas had the confidence to continue this ruthless consistency knowing that no player has won more ATP matches in 2021 so far than he; both on clay and overall. 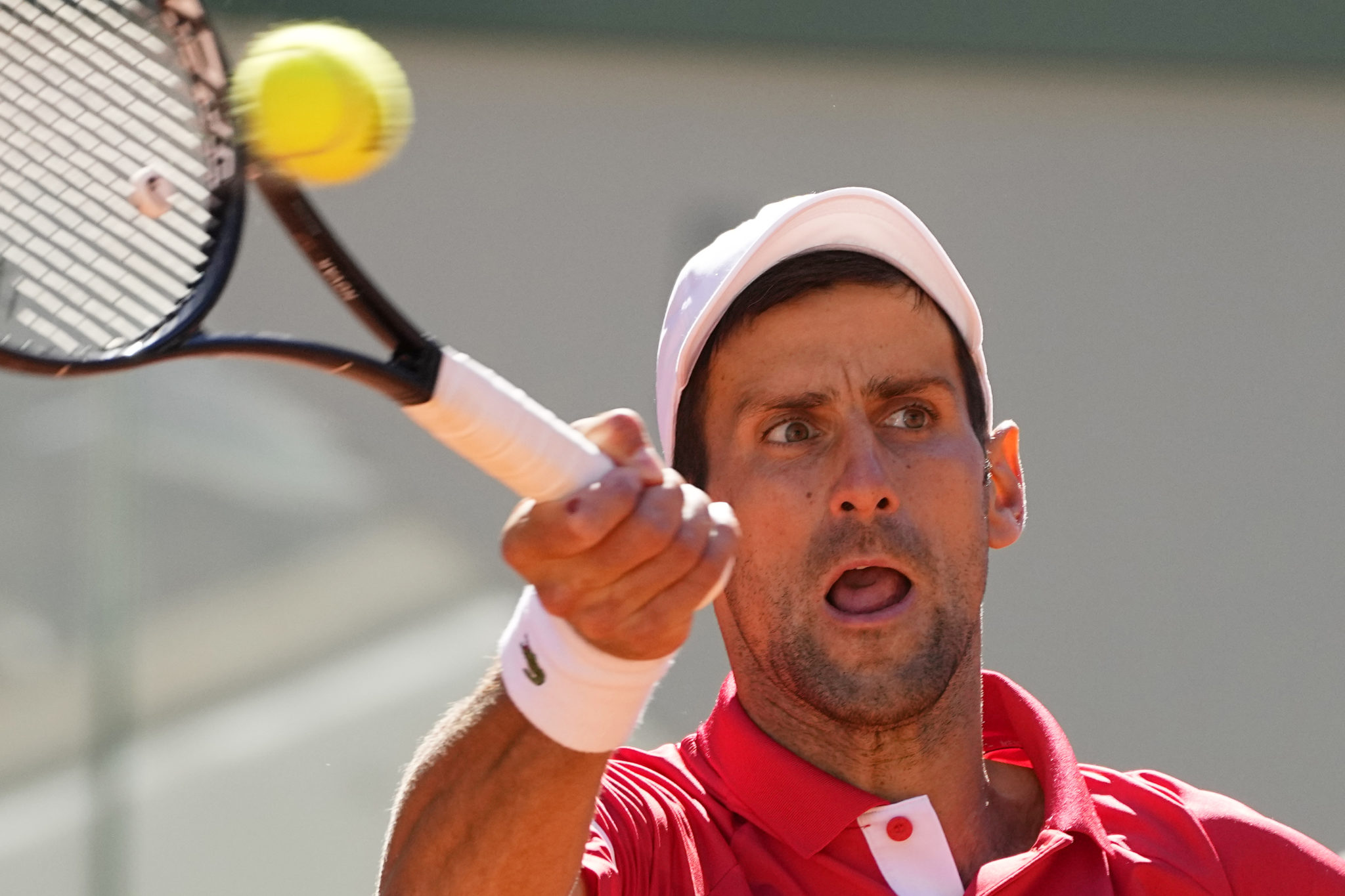 Serbia's Novak Djokovic slams a forehand to Stefanos Tsitsipas of Greece during their final match of the French Open tennis tournament at the Roland Garros stadium Sunday, June 13, 2021 in Paris. (AP Photo/Michel Euler)

Djokovic would have been well aware of this fact as Tsitsipas' one-two serving punch and wicked forehand-backhand combinations were causing havoc.

Meanwhile, Djokovic was visibly tiring, looking shattered from the physical and mental energy it took to beat Nadal in that classic. Tsitsipas had a gigantic clay stain on the back of his shirt since the match's tiebreak but did not appear to notice, such was his uninterrupted state of creative flow.

Djokovic hit the net to go down a double break and Tsitsipas served the second set out at 6-2 with an ace that Djokovic barely made an effort to return. With the watching world stunned, it looked like the latter would become the first Greek to ever win a Grand Slam title.

Two sets down and completely lethargic, Djokovic needed something fast. Just as he did when a couple of sets behind to the 19-year-old prodigy Lorenzo Musetti in the Round of 16, Djokovic left the court, regrouped, and changed clothes, switching from a white to red shirt that he has regularly exchanged all tournament.

Djokovic had never come from two sets down to win a Grand Slam final, a fact almost certainly not lost on him during his wardrobe change.

He may have also been thinking about the fact that he had indeed recovered from this position overall in his career on five different occasions, as well as knowing that Tsitsipas was also two sets up against Zverev on Friday before blowing the lead and taking it to a fifth.

Whatever Djokovic's thought process was at this point - and maybe someday he will reveal all - it worked.

The match-altering moment occurred at 1-2 in the third set on the Tsitsipas serve when he squandered a comfortable 40-15 lead and could not get out of the game for 11 minutes. When he finally did, he had lost his serve as Djokovic broke at the fifth time of asking.

That is all the hope the Serb needed. Now he started playing with a mixture of power, precision and finesse the likes of which were on show in the semi-final. Tsitsipas was now hitting almost three times the number of unforced errors as his opponent. Djokovic saw the set out 6-3 as Tsitsipas failed to return a powerful forehand.

Tsistipas took a medical timeout to sort a hip issue and finally changed his stained clothes. The signs did not look encouraging for him, however, as he was immediately broken in the fourth set.

Djokovic was now exposing Tsitsipas' rapidly decreasing energy levels, just as he had done against Musetti. He achieved a double break in another epic game to go 3-0 ahead and before long, it was 6-2 as Djokovic drove a backhand winner down the line on the angle. The first deciding men's set at Roland-Garros since 2004 was upon us.

The stakes were perfectly set.

For Djokovic, victory would mean becoming the first man since Rod Laver in the late 1960s to win all four Grand Slams at least twice, while it would also be the first time in 72 years that any player has won a major after coming back from two sets down twice in the same Slam. For Tsitsipas, the fifth seed in Paris, a win in his maiden Slam decider would mean a first-ever for Greece which would be extra special this year as his compatriot Maria Sakkari had spurned a match point in her semi-final against Krejcikova.

Djokovic had a break point in the opening game of the last set but Tsitsipas quite miraculously held.

The early evening sun was proving bothersome for both as distracting shadows were splitting the court. Vision was impaired which was a problem that Djokovic appeared to have throughout much of the match.

Tsitsipas was clearly waning though having exerted so much effort to take a two-set lead. His deteriorating condition was reminiscent of early-era Djokovic when he would often suffer from such pronounced fatigue that he could not see matches out. There was no chance of Tsitsipas bailing but while the younger man was running on empty, Djokovic was strengthening knowing that he was on the cusp and had a wealth of experience as his main weapon.

The defining moment arrived when Djokovic broke to go 3-1 up, his game now back to its ruthlessly solid best without needing to rely on the spectacular. Tsitsipas was twice two points from defeat at 3-5 but he impressively held. Djokovic had championship point at 5-4 on his serve only for Tsitsipas to strike a trademark one-handed backhanded winner down the line, wowing the raucous crowd in attendance not nearly full because of COVID-19 restrictions but sufficiently present to define the dynamic.

It was to be Tsitsipas' parting gift to a tournament he has peppered with brilliance this last fortnight and on a surface in which he is so suited long-term. But Sunday was not to be his day.

Djokovic quickly regained championship point and there was no mistake this time as he put away an easy volley at the net, reacting with surprising calm as his record-breaking achievement was confirmed.

Five minutes before appearing on Chatrier, Tsitsipas learned that his beloved grandmother had passed away, according to his own post-match Instagram post. He is known to receive big losses badly anyway, and no doubt losing your first Grand Slam final after racing to a two-set lead is going to take a lot of healing. He will be back, though. Of that, there is no doubt.

As for Djokovic? Well, greatness was already secured but the GOAT throne now awaits for a player who polarises the sporting world like few others but treats it to moments of unimaginable magic when on form. He could be the all-time best by summer's end. Whether you like him or not.

After the match, Djokovic said this weekend was the best 48 hours he has ever had as a tennis player. There is no denying it.

Djokovic through to seventh Wimbledon final