The domestic violence charity Women's Aid says it has seen an increase in calls to its freephone ...

The domestic violence charity Women's Aid says it has seen an increase in calls to its freephone helpline during lockdown.

It responded to a 43% increase between the end of March and the end of June.

She told Newstalk Breakfast: "COVID-19 certainly brought domestic violence to the surface in the most unexpected way.

"But as a frontline service, we were very mindful and aware that not everybody's home is the safest place to be in.

"And when we heard about lockdown we really, really worried about women who were in abusive relationships and what that might be for them and their family and then of course the long-term impact on that.

"We were able to keep our service running 24/7, which was amazing.

"It was uninterrupted and we did meet a huge surge in calls to our national freephone helpline on a monthly basis since March.

"And to say that it hasn't subsided up to last month - it's still pretty much the same."

"I suppose in terms of the impact women are really feeling a lot more scared and under threat."

"In the long-term when the full lockdown was there and with the anticipation of another lockdown maybe coming down the track, it does raise huge levels of anxiety, fear, nightmares, not being able to sleep - just living in an enclosed environment where you are traumatised throughout the day and night.

"So in terms of the types of abuses that women are experiencing: I suppose when you imagine that you are in that close environment the abuse - verbal emotional, financial and sexual abuse - is exasperated [sic] on every level.

"And it's constant, so there's no getting away from that. 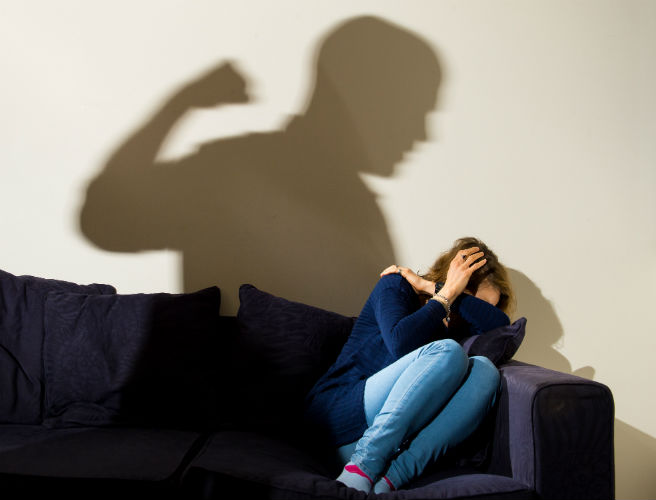 A shadow of a man with a clenched fist as a woman cowers in the corner.
Picture by: Dominic Lipinski/PA Archive/PA Images

"Women have also, we've noted on the helpline, that they've expressed suicidal ideation more so than we would have experienced in the past.

"That really translates to the level of trauma that they're experiencing, and as well as that not having a sense of a way out.

"Not being able to go for respite or just somewhere safe to be for a few hours, to their mam's or to visit friends, it's horrific really".

She has a message for anyone experiencing violence in the home, or knows someone else who is.

"We're here, we're here 24/7 and we strive to answer as many calls as possible.

"We would say that if you're not getting through the first time please don't give up.

"We're still working hard, we're meeting people on the helpline every minute of every day.

"Don't be feeling isolated or alone, you're absolutely not.

"We offer a safe space to talk and look at maybe possible options for you moving forward."

Its services engaged in 20,763 support contacts last year - during which they heard 24,049 disclosures of abuse against women and children.

The organisation says it is "encouraged" by these numbers, as it means more victims are coming forward.

However, it says that this is only "the tip of the iceberg" in terms of the prevalence of domestic abuse.

Sarah Benson, CEO of Women's Aid says: "Behind these figures are women whose lives have been devastated by abuse.

They told us about being denied access to the family income to feed and clothe themselves and their children and being stalked and humiliated online."

Chairperson of Women's Aid Ailbhe Smyth adds: "It is astonishing in 2020 to hear that women still feel silenced and afraid to come forward for help because they worry about others knowing what is happening, are ashamed and afraid of the stigma.

"We want everyone to know that their experience matters to us.

"Abuse is never the fault of the victim but the perpetrator, and if they contact Women’s Aid they will be supported and believed."

The organisation is calling on the Government to follow through on its commitments to audit and improve existing State responses to domestic and sexual violence infrastructure - including co-ordination, to fully resource specialist services and to prioritise family law court reform.

Anyone affected by issues raised in this article can contact the Women's Aid 24-hour National Freephone Helpline on 1800-341-900 or go to www.womensaid.ie

Main image by Pexels from Pixabay