Women's Aid says it has seen a 43% increase in calls to its freephone helpline during lockdown. T...

Women's Aid says it has seen a 43% increase in calls to its freephone helpline during lockdown.

But behind every call there is a real person with a story of abuse.

Woman's Aid have shared three of these - although all names have been changed and details amended to protect people's identities.

Readers may find some of the following details distressing

Sharon is a 24-year-old mother of two.

She is continuing to work from home during the COVID-19 pandemic, but says she is finding the situation increasingly more difficult and desperate - as she is locked into the house with her abusive husband all day and night.

Prior to the lockdown, her husband was aggressive and controlling - but since the lockdown she says he has become more volatile.

She says: "I feel like I’m being monitored by my husband 24/7. He takes every opportunity he can to undermine and control me.

"He constantly intrudes on my work calls and conversations and I feel like I’ve no choice but to put up with his unacceptable behaviour all day, every day because I’m literally locked inside the house with him.

"It's unbearable and I constantly feel frightened and vulnerable.

"One evening I was preparing dinner, cooking the children’s favourite meal, when he suddenly attacked me and started to choke me.

"I was too scared to ring the Guards because I didn’t want the children to get upset and I was worried about what my husband might do when released by the Guards.

"But, I decided to ring Women’s Aid for support and they helped me in securing emergency refuge for both myself and the children. I'm so thankful for their support."

Agnes (78) has suffered emotional, physical and financial abuse throughout her entire married life.

Though her husband is now 80, she continues to endure his abuse and remains terrified of him.

To make matters worse, her 58-year-old son recently returned to the family home and he has become increasingly more abusive towards her.

Agnes told  Women's Aid: "He refuses to contribute financially and demands that I wait on him hand and foot.

"Whenever I've asked him to help, he has got angry and aggressive with me, shouting things like 'you owe me, you old b***h' and 'you’ve never done anything for me, so why should I do anything for you?'.

"With the COVID-19 lockdown, the situation has become even more unbearable as I feel completely trapped, suffocated and '’m frightened of telling anyone in case matters escalate and the situation gets even worse.

"My two other children both live abroad and I don’t want to worry or upset them so I don't tell them any of what is going on.

"But, having not seen my friends in weeks, I’m feeling very alone and isolated.

"My son is at home all the time now and there is literally nowhere to escape from the abuse of both my husband and my son. I feel like the only way out is to die.

"The stress and intensity of the situation is making me feel hopeless and desperate.

"I've started having flashbacks of some of the worst attacks from my husband and it is giving me panic attacks.

"I’ve thought about ending my own life just to escape the situation."

Agnes is too afraid to seek a safety order against her husband or her son.

But she is worried about what all this added stress and abuse is doing to her mental health - so she might talk to her GP and will stay in contact with Women’s Aid.

Elke has been in an abusive relationship since marrying her husband four years ago.

Since lockdown, she has been minding their one-year-old daughter and working full-time from home.

She is finding being confined to the house with her husband all day a living nightmare.

She told Women's Aid: "He makes me feel like a servant, demanding I cook, clean, and have sex with him when and
as he pleases.

"I’ve tried refusing, but he doesn’t listen and threatens to beat me so badly that no one would recognise me.

He's twice my size and I know the damage his fists have caused me in the past, so I feel like I’ve no other choice but to do whatever he asks.

"I'm terrified of him but I don’t know what to do or where to turn.

"None of my friends or family live in Ireland so I feel completely alone and isolated.

"I’m desperate to leave the relationship with my daughter but I’m scared of what my husband might do to us.

"I’d like to secure a safety or barring order against him but I’m scared I won’t be believed without solid proof."

Elke is continuing to seek support from Women’s Aid, which is helping her to apply for a safety order against her husband. 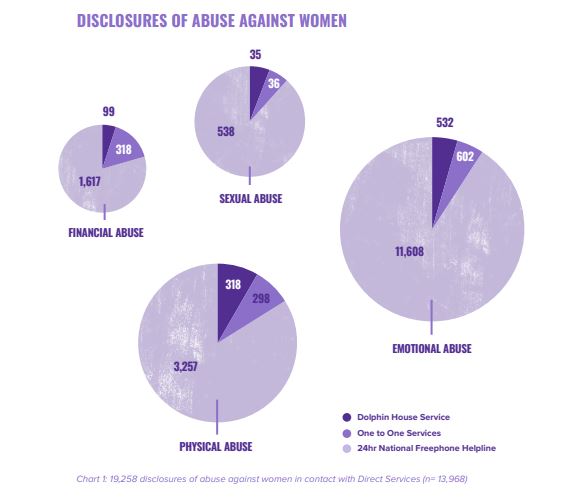 This included being threatened with violence, being stalked both physically and online, being humiliated with posts or threats to post intimate content online, being isolated from friends and family and being in fear of their lives because abusers threatened them with guns.

A number of women experienced a miscarriage because of the abuse.

There were also 609 disclosures of sexual abuse which included women being raped by their partners, being coerced into sexual activity, and having intimate videos and photos taken and shared without their consent. 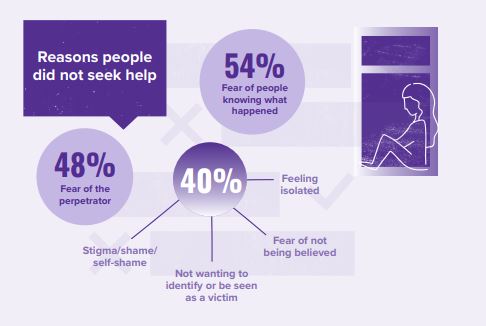 There were also 4,791 disclosures of abuse of children in the context of domestic violence made to Women’s Aid.

This included children being physically, sexually and emotionally abused as well as witnessing the abuse against their mothers.

Where women indicated that they felt their children were at risk of physical, sexual and/or abuse Women's Aid recorded 416 calls that there was a social worker involved in the case.

While 79% of visitors were first time users of the website.

Anyone affected by issues raised in this article can contact the Women's Aid 24-hour National Freephone Helpline on 1800-341-900 or go to www.womensaid.ie

Main image: A woman looks out a window through a blind. Picture posed by model. Picture by: Tim Goode/EMPICS Entertainment

Domestic violence was the main motive for murder last year