Weather alerts have been issued for the entire country

Weather alerts have been issued for the entire country ahead of the arrival of Storm Barra on Tuesday.

A status red marine warning is also in place for Mizen Head to Loop Head to Slyne Head.

South winds, veering west to northwest, will reach violent storm force 11 from 3.00am on Tuesday.

While a status orange wind warning has been issued for Clare, Cork, Kerry, Limerick and Galway.

This will see wind speeds of 65 to 80 km/hr with severe or damaging gusts of up to 130 km/ hr, possibly higher in coastal areas.

And a status yellow wind warning is also to be in place for Leinster, Cavan, Donegal, Monaghan, Leitrim, Mayo, Roscommon, Sligo, Tipperary and Waterford from 6.00am on Tuesday. 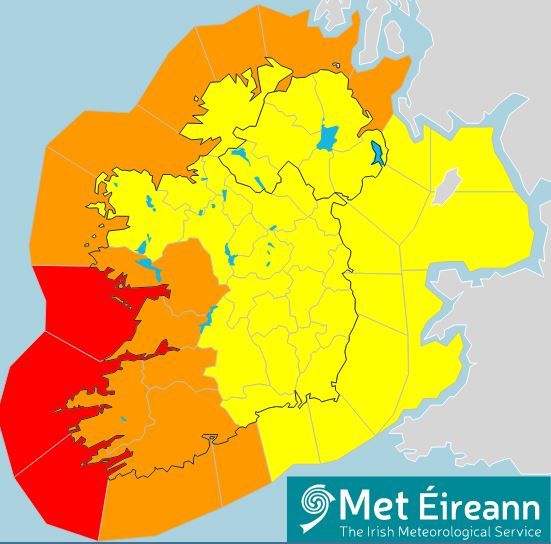 Winds will be strongest in western coastal counties with severe or damaging gusts possible.

Heavy rain will also bring localised flooding - as well as high waves at sea and a "significant possibility" of coastal flooding on south and west coasts.

Evelyn Cusack is head of forecasting at Met Éireann. She told Newstalk Breakfast this is an intense weather system.

"We expect a pretty intense storm - the storm system is developing rapidly at the moment in the Atlantic and it's heading straight for Ireland.

"By this time tomorrow storm-force winds will be affecting west Galway, Clare, Kerry, the western seaboard.

"So really quite a stormy morning everywhere - but the heavy rain, driving rain and sleet and snow on higher elevations.

"Then as the storm centre makes landfall, the winds will veer around from a south-easterly direction to westerly and then nort-westerly."

She says this could have a particular impact on coastal flooding.

"As well as the very strong winds there will be driving rain and showers and hail and sleet - and even some snow mixed it.

"So it really is a multi-faceted, high complex storm system".

Met Éireann met with the National Directorate Fire and Emergency Management and local authorities on Sunday, with another meeting planned for Monday.

And Evelyn says people should be taking in any garden furniture.

"The level of precautions - I would say high level - so at the very least take in everything.

"Certainly with the way this is developing, I would certainly advise not cycling or anything like that tomorrow.

"But the local authorities, the Gardaí and the Coast Guard will all be giving out advice through the course of the day".

However the storm will be quite slow-moving, meaning there may not be any big let-up until Wednesday into Thursday.

Low temperature warning issued for most of Ireland